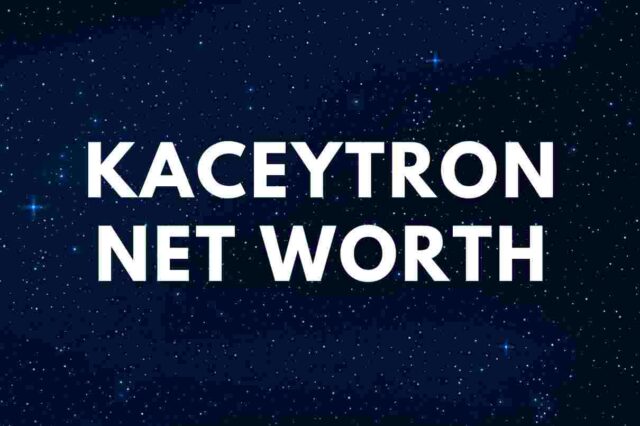 KaceyTron (real name – Kacey Caviness) is an American Twitch streamer who is known for her humorous gaming streams.

Caviness is of French and Native American descent.

Initially, she used to play World of Warcraft.

”Some of you are too young to have experienced playing World of Warcraft during its peak, and for that, I am sorry,” Kacey tweeted on January 2021. ”It was way better than Minecraft.”

Kacey also streamed ”League of Legends,” where she pretends to be a professional gamer while playing the game badly on purpose.

In October 2019, Caviness took aim at Ninja for refusing to stream with any woman. ”He’s one of the most popular streamers on the internet, and he doesn’t support women,” she tweeted.

Ninja later responded to Caviness: ”I have played with multiple women since then, and it got completely blown out of proportion.”

In March 2020, Kacey was indefinitely suspended on Twitch.

”I’ve been indefinitely suspended because of an insensitive comment I made last week,” Kacey explained in a tweet. She also said: ”I ask that my audience please remain calm and rational.”

She was unbanned from Twitch after 10 days. ”I just got unbanned after a week of being banned,” Caviness announced on March 28, 2020. ”I’ll be back Monday!”

In December 2020, Kacey criticized Twitch’s decision to ban Forsen. The streamer was banned on the platform for accidentally showing an explicit Horse GIF on stream.

”Just to basically give the troll viewer what they wanted, and hurt someone financially like that for accidentally showing nudity,” Kacey said.

There is no information about KaceyTron’s boyfriend except that she tweeted in December 2020: ”I have a boyfriend and am so happy.” She went on to say: ”He is 6’5″ and very muscular, he goes to a different streaming website.”

”Why are they still teaching kids in school how to spell when we have autocorrect?”

”Every night when I’m finished streaming, I will be overcome with anxiety that I’m going to get banned for a joke or something is taken out of context.”

”My perspective is important because I was involved.”

She has streamed alongside Jschlatt.

Caviness earned most of her wealth from streaming on Twitch and ads on her YouTube channel.

On Twitch, Kacey has over 560k followers and more than 1,900 subs — meaning about $4,750 in revenue per month from subs. On the platform, Caviness also makes money from donations from fans.

On YouTube, she has more than 16 million views — about $48k in revenue.

In 2019, Kacey revealed that the IRS seized all her money from her bank account after falling behind on her taxes.

Therefore, KaceyTron has an estimated net worth of $200,000.

READ THIS NEXT: Who is Shay Johnson?