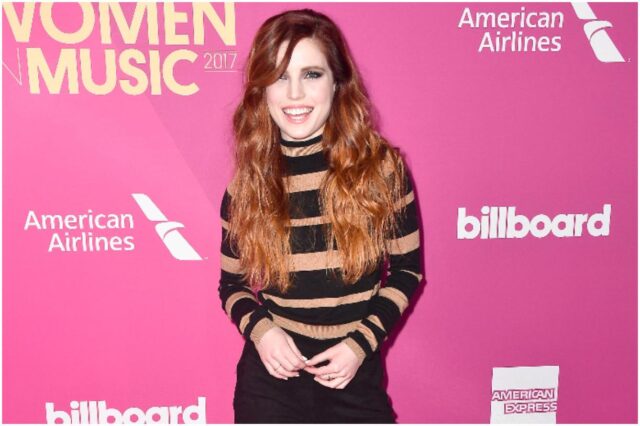 Sydney Sierota is the lead singer of the alt-pop band Echosmith along with her three brothers Graham, Noah, and Jamie (who actually left the band in 2016). In 2014, Sierota was named one of MTV’s 2014 Artists to Watch.

Sierota sang for the first time when she was 2 years old, in church.

Sydney has three brothers, Graham Sierota, Jamie Sierota, and Noah Sierota, who are all musicians.

At age 5, she started playing in a band with her brothers.

Since 2009, she is a part of the band named ”Echosmith” with her brothers.

During an interview, Sierota said about her band:

”Being in a band is like family for all other bands, the difference is that we are actually family.”

Sydney went on to say:

”The same kinds of things that would bother anyone in a band can bug us, but early on we made the decision to not go there with each other.”

At the start, the band has released many covers of songs such as:

In May 2012, Echosmith signed to Warner Bros. Records.

“Cool Kids” is their debut single song from the album. When asked about the creative process behind “Cool Kids,” Sydney responded:

”It took a few months to write because we kept going back to it, editing it.”

In June 2014, the band made their late-night TV premiere, performing “Cool Kids” on the late-night talk show Conan (hosted by Conan O’Brien).

In 2015, Echosmith made a guest appearance in The Muppets episode “Single All the Way.”

”This actually happened in May, in Japan of course !!!”

”We walked passed the castle, I saw a guy with a pro camera and was gonna ask him to take a pic of us, before Cameron stopped me.”

”I thought that was weird but just went along with it haha. So we set up a self-timer and went to pose for the pic……then he got on one knee and asked me to marry him.”

The couple got married in March 2019.

Note – her husband, Cameron Quiseng, is a member of the pop-dance group Allstar Weekend. They recorded an EP of the cover song named – ”Kevin’s Place.” In October 2010, ”Allstar Weekend” released their debut album, titled – ”Suddenly Yours.”

”I think being family-focused and making time for friends and relationships is really important in staying balanced.”

”I know I’ve had a lot of really cool experiences and conversations that I never ever would’ve been able to have if I wasn’t doing this.”

”The ride has been so exciting, hard, exhausting, fun, and really a dream come true.”

”We’re not going to be doing any collaborations any time soon.”

“I always like to work on songs where there’s a lot of different ways that you can interpret it.”

Her favorite band is Coldplay, a British rock band which was formed in 1996 in London.

The members of Coldplay are:

In a YouTube video called ”5 things to know about Echosmith,” Sierota said that she does sit-ups while brushing her teeth.

Sierota is a fan of Taylor Swift, an American singer-songwriter. Her album, ”Reputation,” sold more than one million copies in 4 days from release.

With the single “Our Song,” Swift became the youngest solo artist to record a #1 hit on the U.S. Hot Country Songs chart.

Sydney gets frequently confused with actors like Jane Levy or Emma Stone.

Her face was featured in BCBgeneration and Justine magazine.

Echosmith has mentioned that a few artists have influenced their work.

Some of the artists are:

As a model, her first shooting was for the American magazine Teen Vogue.

In May 2015, Sierota has been signed by Wilhelmina Models, a talent and modeling agency with its headquarters in NYC.

READ MORE: Is Till Lindemann married?

Sierota earned most of her wealth from being the lead singer and keyboardist of the pop band Echosmith.

The band is best known for the song “Cool Kids,” which was certified triple platinum by the RIAA with more than 1,200,000 sales in the US and reached number 13 on the Billboard Hot 100.

In 2019, Echosmith worked with Timbaland, For King & Country, and Audien. They also released “Lonely Generation.”

Moreover, the band has a YouTube channel with over 903,000 subscribers and more than 309 million views (meaning about $600,000 in revenue). Also, Sydney earns some money from being a model.

Therefore, singer Sydney Sierota has an estimated net worth of $1 million.

READ THIS NEXT: Jessie Reyez Net Worth