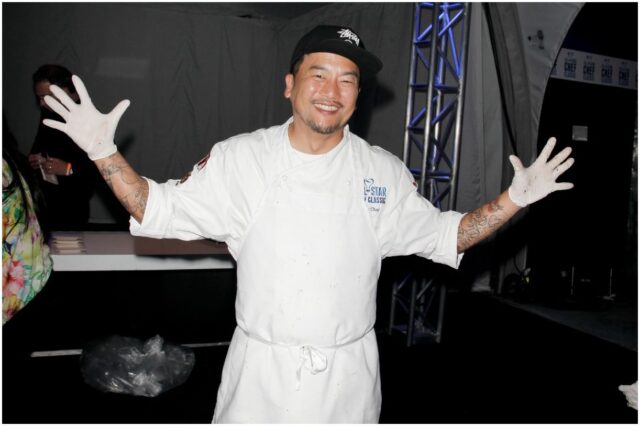 Roy Choi, nicknamed “Papi” and “El Guapo,” is a Korean food truck pioneer who is best known as the founder of the taco truck Kogi, a Korean fusion taco truck that has hooked Korean barbeque-loving Angelenos.

Choi has also been the featured chef at high-profile venues such as Embassy Suites and the Beverly Hilton.

He was born in South Korea in 1970. He moved to LA with his parents when he was 2 years old.

When he was young, his parents owned a Korean restaurant named ”Silver Garden” in Anaheim, California, for three years.

He said about his childhood:

Choi went on to say:

”My parents worked and sold and hustled; they were gone from the morning, and I pretty much took care of myself.”

Roy grew up in LA and struggled with drug addiction as a teenager. Choi was addicted to crack for a short time, marijuana and gambling, which lasted about 3 years.

During an interview, he declared:

”And it was three years of the darkest time of my life, but it started out just all fireworks and pom-poms, you know?”

He graduated with honors from USC with a BA in Cinema from the School of Cinematic Arts.

“Essence of Emeril” show inspired Choi to enroll in culinary school. He said:

In 2008, in partnership with Caroline and Mark Manguera, Roy launched Kogi Korean BBQ-To-Go. With Kogi BBQ, Roy is serving top-quality food at a great price.

Roy has a daughter named Kaelyn.

In this book, he wrote more than 85 recipes that meld the overlapping flavors and traditions of L.A. – including kimchi, homemade chorizo, tempura potato pancakes, and Korean fried chicken.

His book was a New York Times Bestseller in 2013.

”You can be upside down in your life or just on the road to nowhere and completely find yourself. It happened to me.”

“I’m looking for ways to really intensify vegetables, making them really simple with lots of flavor, like Korean side dishes.”

”We are going to take a look at the broken systems in our country and take off to find the good people on the ground doing things about changing those systems. A quest for goodness.”

“Instead of forcing your customer to come to your restaurant, why not bring the restaurant to them?”

”I wasn’t always the most professional looking/acting dude in the world, so I’d go into restaurants, get treated not that well, kind of like crap.”

“There’s the bad-boy image, but they’re not listening to what I’m saying all the way through. I cross worlds, and I don’t pass judgment on anyone.”

His career inspired the 2014 Jon Favreau-directed film titled – ”Chef,” on which Roy was also a technical adviser. Jon Favreau is an American actor and director who played Pete Becker on the series Friends.

Moreover, Jon had a role as an extra in the 1992 feature Hoffa. Favreau made his directorial debut with the 2001 feature Made. His other acting credits include I Love You, Man, The Break-Up, and Very Bad Things. Jon Favreau rose to fame with his lead role alongside Vince Vaughn in the film Swingers (1996), which he co-produced and wrote.

His favorite childhood memory is making dumplings at the age of 8 at his family’s own restaurant.

READ MORE: What is the net worth of Bill Hybels?

Choi made most of his wealth from managing his restaurants. Roy currently runs several LA-area restaurants, including:

In addition, he is a co-founder of the food truck movement Kogi Korean BBQ-To-Go, which grossed about $2 million in 2009, with a check average of $13. In 2019, Kogi is generating more than $850 million in revenue per year.

In addition, he consulted on the film “Chef” and developed The Chef Show with actor-director Jon Favreau. Choi also maintains a blog on which he posts amazing recipes.

In 2015, Roy and Daniel Patterson opened a restaurant called LocoL in Watts, LA. He also worked for Hilton Hotels, and published a book in 2013.

Therefore, chef Roy Choi has an estimated net worth of $3 million.

READ THIS NEXT: Is Pascal Duvier married?