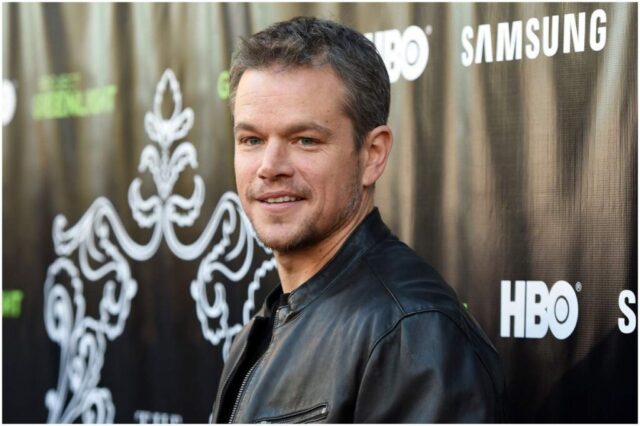 Matt Damon is an American actor and film producer who is perhaps most famous for his role as Jason Bourne in The Jason Bourne series.

His mother, Nancy Carlsson-Paige, is of Swedish and Finnish ancestry and worked as a childhood education professor at Lesley University.

His father, Kent Damon, was of Scottish and English descent and worked as a stockbroker, realtor, and tax preparer.

His parents divorced when he was two. Damon said in an interview:

”My parents divorced when I was young but I was brought up in two really loving households.”

”I was gonna be getting out of school in two or three months when I got a part in the movie Geronimo: An American Legend.”

Damon went on to say:

”I went out to Los Angeles and stayed with Ben. I slept on his floor.”

In 1997, Matt and Ben Affleck co-wrote and performed in Good Will Hunting. The movie was nominated for 9 Academy Awards. Damon and Affleck’s movie won the Golden Globe and Academy Award for Best Original Screenplay.

In 1998, Damon played the role of Private Ryan in Steven Spielberg’s film Saving Private Ryan.  He had the opportunity of working with Vin Diesel and Tom Hanks while filming that movie.

In 2002, he was featured in Martin Scorsese’s The Departed.

In 2007, Matt received a star on the Hollywood Walk of Fame.

In 2008, he turned down the role of Harvey Dent in The Dark Knight.

In 2011, Damon starred in We Bought a Zoo, Contagion, and The Adjustment Bureau.

In 2015, Matt performed as Mark Watney in The Martian.

From December 1997 to March 2000, Matt Damon was in a relationship with Winona Ryder.

Gwyneth Paltrow introduced him to Winona in 1997. At the time, Paltrow was dating Ben Affleck.

Matt met his wife in Florida, while he was filming Stuck on You and Luciana was working as a bartender. He said in a later interview:

”I think marrying somebody who’s not a celebrity, it just takes a lot of the pressure off.”

According to Vogue, Matt and Luciana have an agreement to never spend two weeks apart in order to maintain a solid relationship.

The couple has three daughters:

In addition, the actor has a stepdaughter, Alexa, from Luciana’s prior relationship with Arbello Barroso. Arbello stated in an interview about Damon: ”I couldn’t possibly have asked for a better stepfather for my daughter than Matt.” Barroso continued: ”He treats Alexa like she is his own flesh and blood.”

”All you have in the end is to look back and like the choices you’ve made.”

”It’s a very interesting time to live in because it’s so much less predictable.”

”I’ve been addicted to refreshing my newsfeed every seven minutes, so I’m reading a ton every day: I have The Atlantic, The New York Times, The New Yorker.”

”The journey is everything!”

”It’s better to be a fake somebody than a real nobody.”

According to some reports, Damon lost more than $40,000 during a game from an arranged tournament by Molly Bloom.

In 1998, Matt was knocked out on the first day at the World Series of Poker by poker legend Doyle Brunson.

He quit smoking after visiting a hypnotist in Los Angeles.

Matt gained more than 30 pounds to play Mark Whiteacre in The Informant.

Damon shaved his head for the movie The Brothers Grimm.

He is a die-hard Boston Red Sox fan.

He was the founder of H2O Africa Foundation.

His daily life is so average even the paparazzi have decamped from outside his home in LA. The actor even said:

”If anybody wanted to photograph my life, they’d get bored in a day.”

Damon earned most of his wealth from performing in over 86 movies and TV series.

Some of Damon’s major projects include Ford v Ferrari, The Martian, Deadpool 2, Behind the Candelabra, The Great Wall, The Informant!, Ocean’s Thirteen, The Adjustment Bureau, Hereafter, Bourne movies, and The Talented Mr. Ripley.

Therefore, American actor Matt Damon has an estimated net worth of $180 million.

READ THIS NEXT: Is Leonardo DiCaprio married?