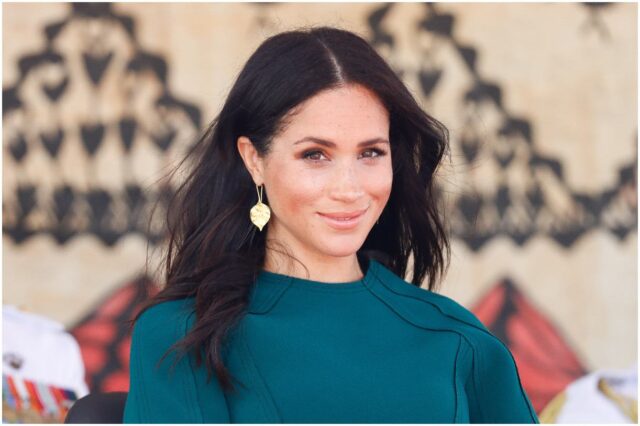 Meghan Markle is an American actress who is best known for her portrayal of Rachel Zane on the series ”Suits.” She made media headlines when she started dating Prince Harry.

Following their wedding on May 19, 2018, Meghan became known as the Duchess of Sussex.

Her mother, Doria Radlan, is a yoga instructor and therapist, while her father, Thomas W. Markle, is an Emmy Award-winning lighting director.

During an essay for Elle, she wrote about her heritage:

“My dad is Caucasian and my mom is African American. I’m half black and half white … While my mixed heritage may have created a grey area surrounding my self-identification, keeping me with a foot on both sides of the fence, I have come to embrace that.”

”To say who I am, to share where I’m from, to voice my pride in being a strong, confident mixed-race woman.”

She has a sister named Samantha.

Her parents divorced when she was 6, and Markle lived with her mom after the separation.

During her studies at Northwestern University, Markle started playing small roles in films and television series. She said:

”My very first audition was for ‘Hot Girl #1’ in some movie.”

She also worked as a freelance calligrapher to support herself between early acting jobs.

In 2010, Meghan acted alongside Russell Brand in the comedy – ”Get Him to the Greek.”

Moreover, Meghan served as the editor-in-chief of her lifestyle brand ”The Tig.” One of The Tig’s features was Tig Talk, a column which profiled women including:

Her wedding with Prince Harry was held on May 19, 2018, in St George’s Chapel at Windsor Castle in the UK. The pair didn’t sign a prenuptial agreement before the wedding.

They met while Prince Harry was attending the Invictus Games in Toronto, where ”Suits” was filmed.

The photographer of the wedding was Alexi Lubomirski, a fashion and celebrity photographer who lives in NYC – who has previously snapped the likes of Jennifer Lopez, Natalie Portman, and Scarlett Johansson.

When Lubomirski was announced as the official wedding photographer, he declared:

”I could not be more thrilled or honored to photograph this historic occasion.”

“Every time Harry or Meghan would talk, one would look at the other and there would be this little sparkle, this little giggle, a little nudge of the elbow and it was so cute.”

The wedding was the very 1st royal nuptial to be broadcast live in Ultra HD 4K resolution.

Her wedding dress was designed by Clare Waight Keller, a noted British stylist and fashion designer, and the artistic director of the fashion house Givenchy.

Clare Waight Keller also designed the 16-foot veil that featured embroidered flowers from all of the 53 countries in the British Commonwealth (a unique political association of 53 member states).

Meghan said about her veil:

“It was important for me, especially now being part of the royal family, to have all 53 of the commonwealth countries incorporated. And I knew it would be a fun surprise for my now husband – he didn’t know!”

”He was really over the moon to find that I would make this choice for our day together, and I think the other members of the family had a similar reaction.”

Her engagement ring is a timeless 3 stone engagement ring, boasting a center cushion diamond and accented by two diamonds, one on each side. The center stone of Meghan’s ring comes from Botswana. Prince Harry designed the one-of-a-kind ring with Brit jeweler Cleave & Co.

In January 2020, Prince Harry and Meghan Markle announced their intention to “work to become financially independent.” This means that they would be able to earn income as professionals, but would no longer receive money through the “sovereign grant” the royal family receives.

“After many months of reflection and internal discussions, we have chosen to make a transition this year to carve out a progressive new role within this institution.”

They welcomed a baby boy named Archie in May 2019.

Kensington Palace said in a statement:

“Their Royal Highnesses have appreciated all of the support they have received from people around the world since their wedding in May and are delighted to be able to share this happy news with the public.”

She appeared in the following movies and TV shows:

READ MORE: Who is Doris Day?

”Know your body and what works for you and you’ll be fine.”

”My parents always told me if I believed something was wrong, I should try to fix it.”

“With fame comes opportunity, but in my opinion, it also includes responsibility.”

“There is a myth that those who do humanitarian work have a savior mentality, but the relationship is reciprocal.”

”Make a choice: continue living your life feeling muddled in this abyss of self-misunderstanding, or you find your identity independent of it.”

”My life has changed because my access has changed, and so has the level of privacy in my life.”

“If you make a fashion mistake, that’s one that’s going to resonate for a very long time.”

”Be kind to yourself.”

”Be able to delegate, because there are some things that you just can’t do by yourself.”

“I think you have to make time for yourself so that work doesn’t become the end-all-be-all.”

She was born six days after the marriage to her husband Prince Harry’s parents – Princess Diana and Prince Charles.

From 2011 until their divorce in 2013, Meghan was married to producer and actor Trevor Engelson.

Meghan was born on the same day as her Suits co-star Abigail Spencer – August 4, 1981.

“Being ‘ethnically ambiguous’, as I was pegged in the industry, meant I could audition for virtually any role.”

Meghan went on to say:

”Sadly, it didn’t matter: I wasn’t black enough for the black roles and I wasn’t white enough for the white ones, leaving me somewhere in the middle as the ethnic chameleon who couldn’t book a job.”

She spent about $11,000 on numerology and acupuncture in the months leading up to her son’s birth.

Moreover, Meghan made around $50,000 per episode on ”Suits.” She appeared in 108 episodes in the TV series, hence, Meghan earned around $5.4 million only from ”Suits.” Therefore, Meghan Markle has an estimated net worth of $10 million.

READ THIS NEXT: Who is Hugh Jackman’s wife?