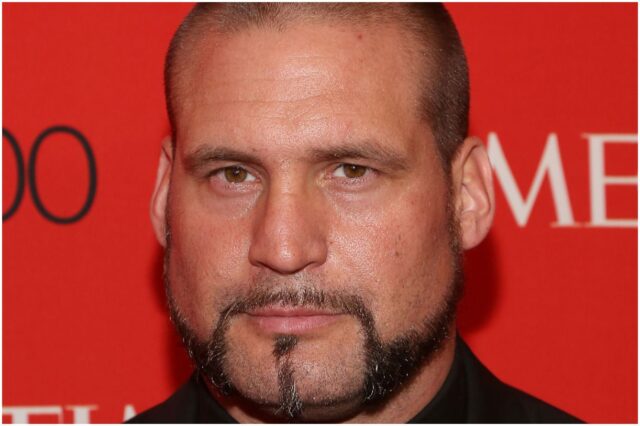 Pascal Duvier is a German bodyguard who worked for the Kardashian sisters. Pascal has also worked with many high-profile A-list celebrities.

Duvier served in the German army. He said:

”I started in the German army. At the time it was mandatory to enlist in Germany and I thought it was a good idea to do something for your country.”

In 1999, he graduated from Heidelberg University, a public research university that is located in Heidelberg, Baden-Württemberg, Germany.

After moving to the US, he started his own security company called ”Protect Security,” which provides security to celebrities.

“My goal as the Chairman of Protect Security is build a security team around the protected person.”

Pascal has worked for Kim Kardashian since 2012, being by her side at significant events over the years.

In 2016, Kim was the victim of armed robbery in a luxury hotel in Paris. Five masked men wearing police markings entered her apartment and stole $10 million worth of jewelry (including her diamond engagement ring worth $4.5 million). Kim declared:

“They grabbed me and took me into the hallway.”

Kim went on to say:

”I was wearing a bathrobe, naked underneath. Then we went in the room again and they pushed me on the bed.”

”And, it was this time, they tied me up with plastic cables and taped my hands, then they put tape over my mouth and my legs.”

According to reports, Pascal was at a club, two miles away from the apartment, trailing her sisters Kendall and Kourtney on a night out.

Duvier stopped working for Kim shortly after the robbery. He also turned his Instagram private after he has been trolled for being absent when Kardashian was held at gunpoint during the robbery.

After the incident, Pascal declared:

“The events that occurred in Paris was one of the most sickening things I have seen or heard.”

”We have tips and leads and we will find you. That I promise you…you messed with the wrong one.”

So far, ten people have been charged over the heist. The only piece to be recovered from the robbery is a diamond-encrusted cross worth $34,000 that was dropped by one of the robbers fleeing the scene on a bicycle.

Just a few days before the heist, Duvier and Kardashian were in the spotlight when Pascal tackled Vitalii Sediuk (a celebrity prankster) after he accosted Kardashian on her way into a restaurant.

In 2018, Kim’s insurance company has filed a lawsuit against Duvier and his company because he failed to correct several security breaches in the hotel that Kim was robbed.

After the heist, there were reports that stated that he battered his wife so severely that Glenda got a temporary restraining order against him.

Pascal wrote a 5-page response in which he claimed Glenda started “pushing and scratching him” when he attempted to leave, before he “swiped her hand” away. In his words:

“I did not want a physical confrontation and went around her to try different paths out of the house.”

“I swiped her hand from me as I was looking away.”

Glenda also said that the assault happened in front of their daughters, and left her with a swollen cheek.

Pascal is the father of two girls – Beline and Alisha.

Pascal said about his diet:

”My diet consists of eating everything. Lots of fish and meat, fruit, pasta, rice, bread, and of course cake.”

”I work out a lot and I need fuel to feed my body.”

”I don’t model. And if it has to be a good offer. Turned already 2 major companies down. I’m security, not a celeb.”

“Black is my option since I’m mainly with musicians, and if I’m at a show on stage I don’t want to be the guy standing out with a white shirt against a dark background.”

”You don’t become a bodyguard overnight. It’s a job with dedication, responsibility, and passion.”

”The most essential muscle a bodyguard should train is his brain. You study everything; every move, your surroundings. I always pay attention to details and body language.”

Pascal takes his job very seriously. He wrote on his social accounts:

”Even when the fans create chaos you have to stay professional and not neglect your surroundings.”

Duvier has worked on international tours with Justin Timberlake.

He’s also worked with other celebrities, including;

To ensure their protection, Pascal usually travels either in a car with the celebrities he protects or in another car right behind them.

When asked whether he befriends his clients, he responded:

Duvier earns most of his money from being the CEO of ”Protect Security,” a firm that provides protection for celebrities.

About 10 weeks before Kardashian’s robbery, he filed for bankruptcy for his security company. His business had debts of more than $1.4 million. During an interview, his lawyer said – “There is so much debt. There are many claimants.”

But, he still works as a bodyguard for stars.

Therefore, German bodyguard Pascal Duvier has an estimated net worth of $1 million.