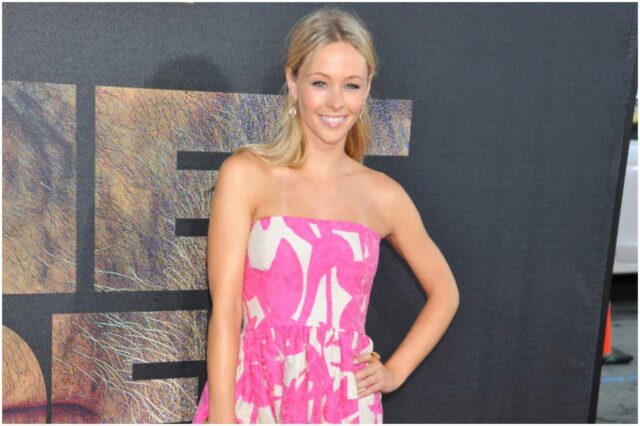 Emily Montague is a former model and actress. She’s also currently an aesthetician and beauty therapist.

Oh, and she’s the ex-wife of popular mainstream comedian and actor Chris D’Elia, and the current wife of ‘Stitchers’ star Damon Dayoub.

Emily Montague was born on August 30, 1984, in Livingston, New Jersey.

She has historically been pretty close-lipped about her family and education, but she made moves to try her hand in the entertainment industry in the mid-2000s.

Thanks to her delicate features and stunning looks, Montague was signed as a model—the ideal stepping stone for many aspiring actresses.

Eventually, she made the transition to acting.

Emily Montague doesn’t have an extensive list of film credits to her name.

In fact, her early career was predominantly ads for food and drinks. In 2004 she featured in the short film, Paper or Plastic, which kickstarted her mainstream television career.

Her role in Paper or Plastic helped her secure her first television role in Cold Case.

This was followed by small parts in Beauty in the Chaos, Close to Home, popular hit Boston Legal, and the perennial Days of Our Lives.

Despite adding small roles in hit shows to her acting resume, Emily Montague received very little recognition as an actress.

Her movie credits leading up to 2017 were Fright Night—for which she received the most attention of her acting career—and The Endless.

She also did some short films up until that point.

At the time, D’Elia was just breaking out as a comedian—he hadn’t yet secured major gigs with Comedy Central.

During that time, D’Elia’s career soared—he gained major national and international success as a comic, podcaster, and actor, and featured heavily alongside other comedy greats.

Montague, on the other hand, was still a struggling actress with small—often no-name—characters under her belt.

In 2010, the couple divorced. Montague stayed tight-lipped on the matter, but D’Elia wasn’t quite so private.

He told Vulture magazine that he and his ex had talked about having children but decided to pursue their family dreams separately.

He also mentioned, years later, that his stand-up career may have had something to do with his failed romantic relationships.

D’Elia explained that stand-up was what he had always wanted to do with his life—and then it became his life. He confessed: “and it still is. It’s my whole life.”

Emily Montague eventually met and fell in love with another actor—Damon Dayoub.

In 2015, the couple were married, and their daughter Ava James Dayoub was born in December 2017.

Damon Dayoub is most famously known for his roles in hit shows like Stitches, Suits, and NCIS. He has more than 20 other film and television credits to his name, with less than a decade in the entertainment industry.

He is also a graduate of Austin’s University of Texas.

Dayoub, who is active on social media and is slowly gathering a reasonable Instagram following, is vocal about his wife’s achievements and shares a lot of family pictures—including photos of his daughter—to the major platform.

Emily Montague may have received more media and internet attention as a wife—first to Chris D’Elia, and then to Damon Dayoub—than she ever did for her acting, but she’s recently taken her career in a new direction.

In 2020, she joined the staff at skincare clinic Shani Darden Studio, located in Beverly Hills, California.

What is the net worth of Emily Montague?

Actress Emily Montague has an estimated net worth of $700,000.

Looking for advice on your skincare? Check out Emily Montague and the Shani Darden Studio team.

READ THIS NEXT: Laura Clery Net Worth