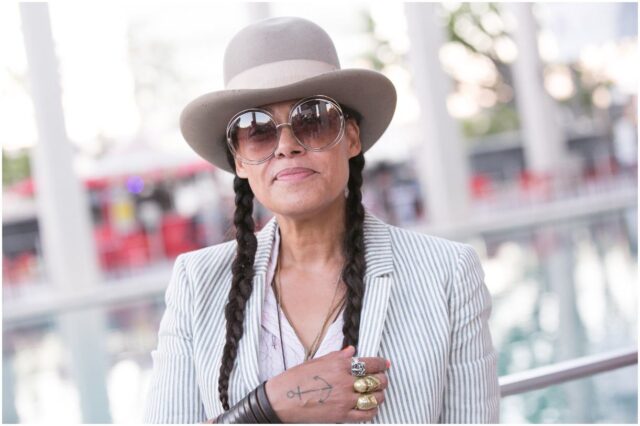 Cree Summer is an American Canadian singer, voice actress, and actress who released her debut solo album ”Street Faërie” in 1999.

Her brother, Rainbow Sun Francks, is an actor, VJ, and is involved with Console Creatures — a video game website. Rainbow also appeared as US Marine Lieutenant Aiden Ford in Stargate Atlantis Season 1.

Her father, Don Francks, had roles on many TV programs, including – Mannix, The Wild Wild West, The Man from U.N.C.L.E., Jericho, and Mission: Impossible. Francks also portrayed “Walter” in the television series La Femme Nikita from 1997 to 2001.

She has grown up on the Red Pheasant Reserve in Saskatchewan.

Cree got her first role as a voice actor in Inspector Gadget — a science fiction comedy animated series.

From 1988 to 1993, she performed as Winifred “Freddie” Brooks on The Cosby Show spin-off, A Different World.

In 1993, Cree released an album titled – ”Womb Amnesia” with her band Subject to Change.

In 1994, Summer was part of the cast of the TV series ”Sweet Justice.”

She released her solo album Street Faërie in 1999.

From 2007 to 2009, she portrayed Blackarachnia in six episodes of the series Transformers: Animated.

Cree portrayed Penny from Inspector Gadget in an episode of Nostalgia Critic in December 2016.

From 2019 to 2020, Summer has performed as Lenny in 6 episodes of the TV series Better Things.

In the past, she used to date actor Kadeem Hardison.

Summer has a son from a previous relationship named Miles Franklin Summer-Pullens (b. 1998).

”I’ve always stood out like a sore thumb, and I always have not given a damn.”

”One character I’d like to voice that I haven’t played yet is a fairy.” (Black Doctor)

”My voice sounds like I dragged my vocal cords down a dirt road and then doused it in Jack Daniels and mentholated Cools.” (Splinter News)

She has dual American and Canadian citizenship.

READ MORE: What is Brock O’Hurn’s net worth?

Summer earned most of her wealth from working as a voiceover actress in TV series, games, and movies.

In movies and TV series, Summer had the role of Blackarachnia in Transformers Animated, Penny in Inspector Gadget, Granny May on WordGirl, Elmyra Duff on Tiny Toon Adventures, Tiff on My Life as a Teenage Robot, Aka Pella in Histeria!, Miranda on As Told by Ginger, Susie Carmichael in Rugrats, Penelope in Barbie As Rapunzel, Lenny in Better Things, Masters of the Universe: Revelation, Cleo the Poodle in Clifford the Big Red Dog, Cree Lincoln in Codename: Kids Next Door, Foxxy Love in Drawn Together, Valerie Gray in Danny Phantom, Hippolyta in DC Super Hero Girls, Princess ‘Kida’ Kidagakash in Atlantis: The Lost Empire, The Proud Family: Louder and Prouder, Amunet in DuckTales, and Dulcy the dragon in Sonic the Hedgehog.

Therefore, American-Canadian actress Cree Summer has an estimated net worth of $4.5 million.

READ THIS NEXT: Who is James Corden’s wife?