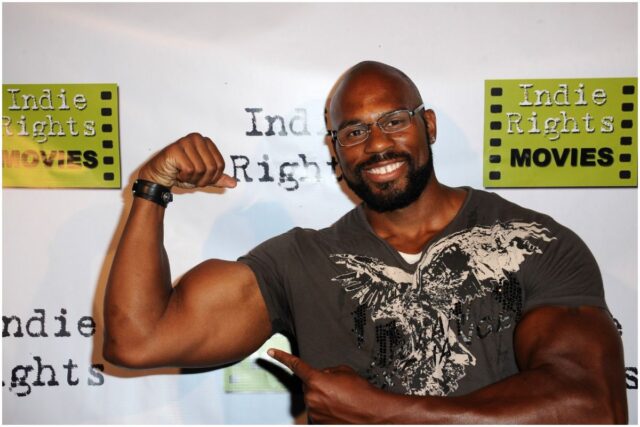 Shad Gaspard (ring name – “Da Beast”) was a professional wrestler and actor, who is best known as a member of the wrestling team Cryme Tyme with fellow WWE star JTG.

Shad was of Haitian and Curaçaoan descent.

His father was a former personal security guard in the early 70s.

In 2003, he signed with World Wrestling Entertainment (now WWE).

On October 27, 2007, JTG and Shad won vs. The Dirty Rotten Scoundrelz at Jersey All Pro Wrestling’s 10th Anniversary Show.

In June 2012, he accused Darren Young and Titus O’Neil of ripping off Cryme Tyme’s gimmick. ”What type of un original person tries to bite off of Someone Else’s gimmick?” Gaspard tweeted. He added: ”PRIME-TIME-PLAYER? MILLIONS OF DOLLORS? Really?”

In 2016, he performed as Olmeca in one episode of ”From Dusk Till Dawn: The Series.”

In 2018, he provided motion capture for Kratos in the video game God of War. Kratos was voiced by Christopher Judge.

Also in 2018, Shad was a stunt performer in the film Black Panther.

The two first met at a bar in Tampa.

”Being a father is the manliest thing I’ve ever done in my life,” Gaspard wrote on Instagram in April 2020. ”Nothing will give you more joy, pain, love, frustration, and pride.”

Gaspard passed away on May 17, 2020, in Venice Beach, California, after being pulled into the sea by a riptide while swimming with his 10-year-old son.

His son was rescued, but lifeguards couldn’t save Gaspard. The boy was unharmed.

Kenichi Haskett, Los Angeles County Fire Dept Lifeguard Division, said: ”We had one of our lifeguards go out to make a double rescue of a father and a son.” Chief Haskett continued: ”His last few words were ‘just secure my son, rescue my son.’”

Dwayne “The Rock” Johnson posted on Twitter: ”Shad drowned in the ocean, but not before instructing lifeguards to save his son first. That’s the love of a father.”

”He was our heart, our soul, our protector, our warrior,” Siliana Gaspard said in a statement. ”He was a bright force of nature, who brought joy to many through his joyous and gracious nature.”

”We would like to express our gratitude to the first responders who rescued Aryeh,” Siliana also said.

At the end of May 2020, John Cena has reportedly donated $40,000 to a fundraising page for Gaspard’s family.

In December 2020, Siliana filed a lawsuit against Los Angeles County, the city of Los Angeles, and the state of California, alleging dangerous condition of public property and negligence over Shad’s death.

Jon Teller, the Gaspard family attorney, stated: ”It’s an unfortunate event that occurred that should have been prevented.”

”Today, you would of been 40 years old,” JTG tweeted on January 13, 2021. He added: ”I wish you was still here because I would of roasted you on how old you were and photo shopped your picture on a box of JUST FOR MEN M-60 Jet Black.”

”Many of us crucify ourselves between two thieves – regret for the past and fear of the future.”

”Love the life I built for myself and my family.”

Gaspard earned most of his wealth from his career as a professional wrestler in WWE. Shad also performed in several movies and TV series, including – Wrestling Isn’t Wrestling, Think Like a Man Too, The Last Sharknado: It’s About Time, Petunia, My First Miracle, From Dusk till Dawn: The Series, Brothers, The Haunted Hathaways, Welcome to Willits, and Birds of Prey.

Therefore, at the time of his death, professional wrestler Shad Gaspard had an estimated net worth of $1 million.

READ THIS NEXT: Who is Noah Syndergaard?