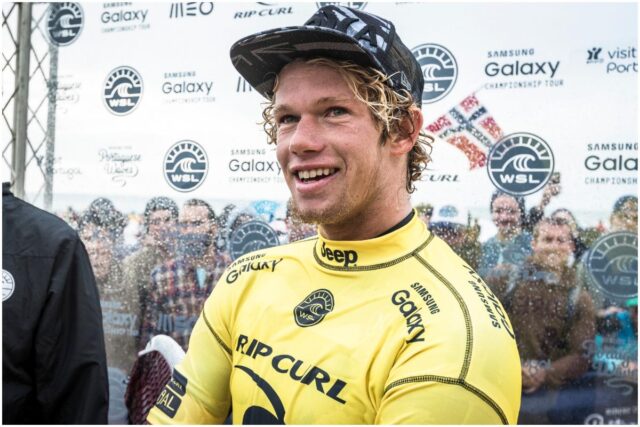 John John Florence is an American professional surfer who won the World Surf League in 2016 and 2017.

His mother is Alexandria Florence.

He has two brothers, Ivan and Nathan.

Florence grew up with the famous Banzai Pipeline in his backyard.

At age 6, he already got his first sponsor, O’Neill.

At age 13, John John became the youngest surfer to compete in the Vans Triple Crown of Surfing.

On December 2, 2011, Florence became the youngest person to ever win the Vans World Cup of Surfing.

In 2016, he won the Eddie Aikau Big Wave Invitational with waves reaching 60 feet. ”I’ve lived here my whole life, and I’ve never seen it like that,” he told Men’s Journal. ”Walking down the beach with people screaming, the energy was so crazy.”

In 2018, he partially tore the ACL in his right knee during a free surfing session in Bali.

”It didn’t happen on the impact when I landed back on the wave, but when I was standing back up,” Florence said in an interview. ”I think my knee was out of place, and it bent funny when I stood back up. I heard a pop, and it definitely didn’t feel right, then I fell and went underwater.”

John John ruptured his right ACL at the 2019 Oi Rio Pro. Here is the video.

He opted for surgery using his own hamstring. ”Surgery was a success, thank you for all the messages and support. Looking forward to starting the recovery process,” he posted on Instagram on July 3, 2019.

”I believe injures give you time to think, and I came back this year with this new energy toward the sport and a new perspective,” Florence revealed in August 2019.

On December 19, 2019, he qualified for the Tokyo 2020 Olympic Games, representing the USA Surfing team.

”My knee is 100 percent today,” he told the Olympic Channel. ”I don’t really notice anything of it at all. I mean, maybe sometimes it gets a little bit stiff, but I think that’s kind of the nature of it.”

In December 2020, he won the 2020 Billabong Pipe Masters at Banzai Pipeline on the North Shore of Oahu, Hawaii. ”It’s great to win the first event of the season at my home break, especially after the injuries I’ve gone through,” he said.

In early 2022, Florence won the Triple Crown of Surfing.

John John Florence is not married.

However, in 2019, John John Florence got engaged to Lauryn Cribb.

”Each year, I get to learn new things, meet new people, and enjoy the relationships I have.”

”When I was young, my mom always had my brothers and I close to the ocean.”

Florence earned most of his wealth from sponsors (Electric, Clif Bar, Dakine, Nixon, Futures, and more Stance), prize money from the tournaments he participated in, ads on YouTube, and his own apparel brand.

In January 2013, he signed a five-year agreement with Hurley, a Nike-owned surf brand. ”I am very grateful and happy to be riding for Hurley, especially at this time of my life,” John John stated.

”We want him to come in and kick the tires, try the trunks, tell us how we can all push the sport forward,” said Hurley’s VP of Sports Marketing Pat O’Connell. ”We’re excited about that opportunity.”

In early 2020, John John parted ways with Hurley. It is rumored that Florence has either walked or been pushed from the agreement. Note – Hurley was sold by its owners at Nike to Blue Star Alliance in 2019.

”We are incredibly energized to embark on this journey with John, his curiosity, vision, and obsession for exploration are unsurpassed,” Bob Hurley stated. ”We’ve been on the same team before, and we really had a whole lotta fun.”

”I am excited to announce Florence Marine X, an apparel brand I am proud to launch alongside Bob Hurley, who has been an inspiration to me over the years, along with longtime friends and industry leaders,” John John said.

Therefore, John John Florence has an estimated net worth of $14 million.

READ THIS NEXT: Who is Ítalo Ferreira?