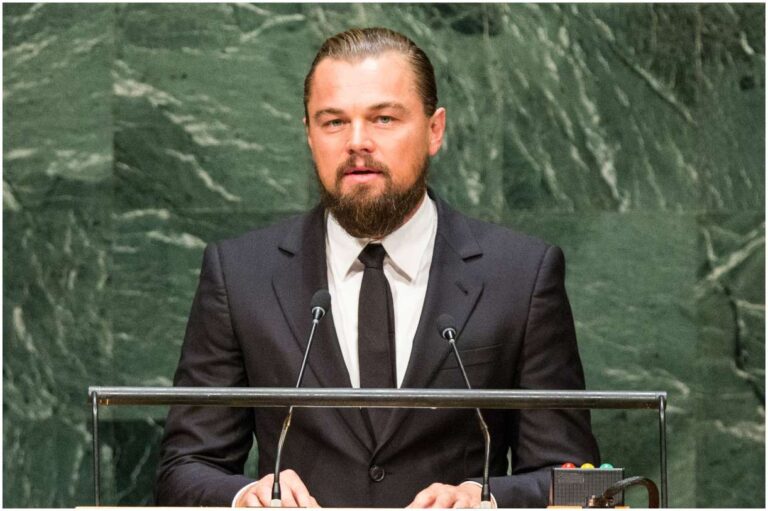 Leonardo DiCaprio is an American actor who has been nominated for seven Academy Awards.

In 1996, Leo appeared in Baz Luhrmann’s film Romeo + Juliet. In 1997, the film earned Leo a Silver Bear for Best Actor at the Berlin International Film Festival.

In 1997, Leo starred in Titanic (production budget of $200+ million), which went on to beat all box office records held before then.

In 2002, he performed in the biographical crime drama Catch Me If You Can — directed and produced by Steven Spielberg. In the same year, he starred in Martin Scorsese’s Gangs of New York.

In 2004, DiCaprio starred as aviation pioneer Howard Hughes in The Aviator. For his performance in Scorsese’s acclaimed biopic The Aviator, Leo earned an Academy Award nomination.

In 2006, Leonardo played a mercenary in the political thriller Blood Diamond — co-produced and directed by Edward Zwick. Blood Diamond has grossed over $171 million worldwide. Also in 2006, he performed in the crime film The Departed.

He was a presenter at the American leg of Live Earth in July 2007. Also in 2007, Leo earned an Oscar nomination for his performance in Edward Zwick’s drama Blood Diamond.

In 2010, he collaborated with Martin Scorsese in the thriller film ”Shutter Island.”

In 2012, Leonardo played a villain in Django Unchained.

In 2015, he starred in The Revenant as Hugh Glass. In 2016, DiCaprio won an Academy Award and was named best actor for the movie.

In 1998, he established ”The Leonardo DiCaprio Foundation” with the mission of protecting the Earth’s last wild places.

In 2010, Leo contributed $1 million to the Wildlife Conservation Society and another million to earthquake relief efforts.

Leonardo DiCaprio was never married, however, he was involved in a number of romantic relationships.

From about 2000 to 2005, Leonardo and Brazilian model Gisele Bündchen were one of Hollywood’s it-couples.

”I love being immersed in nature and wild places. I love scuba diving.” (Wired)

”To tell you the truth, I have no idea what people think of me.”

”It’s almost a religious experience when you go to a place like the Amazon and there’s no civilization for thousands of miles.” (TimeOut)

Leo has worked with many acclaimed directors, including:

”He is one of the most if not the most talented actor of his generation, and the most naturally gifted actor I’ve ever worked with.”

Jack Nicholson and Robert De Niro are his favorite actors.

In 2005, DiCaprio and his business partner bought Blackadore Caye island off the coast of Belize for $1.75 million.

In 2007, the actor spent $6.3 million for a two-bedroom oceanfront house in Malibu, California.

In 2017, Leo acquired a property on Malibu’s Paradise Cove for $23 million.

Leonardo DiCaprio has an estimated net worth of $270 million. DiCaprio earned most of his wealth from performing in over 56 movies and TV series. His films have earned more than $7.2 billion worldwide.

Some of DiCaprio’s best-performing movies are Titanic, Once Upon a Time in Hollywood, Django Unchained, The Revenant, The Aviator, The Wolf of Wall Street, Catch Me If You Can, Inception, Revolutionary Road, The Departed, and Blood Diamond.

For his performance in Titanic, Leonardo received about $40 million ($2.5 million as a salary +1.8 percent share of gross revenue backend points). DiCaprio earned over $55 million from starring in Inception, $10 million from Once Upon A Time In Hollywood, and $20 million from The Aviator.

READ THIS NEXT: Who is Emily Montague?