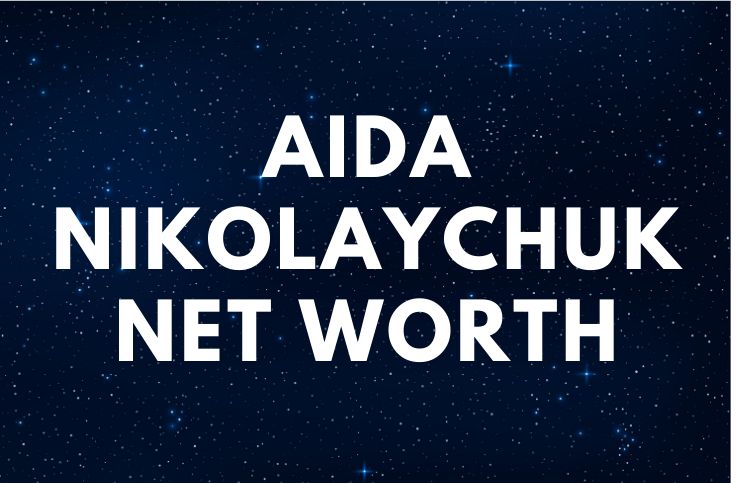 Aida Nikolaychuk is a Ukrainian model and pop singer-songwriter who won season three of The X-Factor in Ukraine. In 2013, she released her debut album, named – ”My Pod Odnim Nebom.”

She was born on March 3, 1982, in Odesa, Ukrainian SSR, Soviet Union, to Yurii Titaiev and Iryna Munika.

Nikolaychuk started singing in the 1st grade, when she became the school choir soloist.

In 2011, Aida participated in the casting show for the 2nd season of the Ukrainian television show X-Factor Online. To be able to participate in the show, Nikolaychuk quitted her job as a cashier.

On December 31, 2011, Nikolaychuk was announced as the winner of the second season of X-Factor Online. By winning the show, she gained entry to the training section of the third season of the TV show – X-Factor, bypassing pre-screening stages and any form of audition.

During the show, Aida covered Polina Gagarina’s “Lullaby.” Her interpretation was so good that the judges thought Nikolaychuk was exploiting backing or playback.

At some point, Aida was interrupted by 2 judges. They challenged her to sing the song a capella (solo singing without instrumental accompaniment). Aida was visibly shocked, however, she complied, dispelling suspicion.

After winning X-Factor, Aida started working with artists in the Commonwealth of Independent States (a regional intergovernmental organization of post-Soviet republics in Eurasia) countries.

In 2016, Nikolaychuk was announced as a participant of the National Final to select the entrant for Ukraine in the Eurovision Song Contest.

In 2016, Aida Nikolaychuk married Nikita Podolsky, a Russian racer who is 12 years younger than Aida.

Prior to their marriage, the two had been dating for about 2 years. Nikita was actually her second husband.

“I love her very much. She’s my soulmate. I’m proud of her.”

Nikita went on to say:

”Her voice chills to shiver, her beauty is mesmerizing, and her soul fall in love, and everything. Once and for all. I have the best wife ever!”

After the wedding, Nikolaychuk confessed:

“We’ve been together for two years, and when the beloved proposed to me, I immediately agreed.”

“We got married and devoted to each other. There were no restaurants, no boats, no balloons. Only love.”

During an interview, Nikolaychuk said:

“Five years of the so-called family life – it was just an illusion of happiness and sheer emotional swings. When the man appears, but is not.”

”When also think that he is near, that’s the same family, this is it happiness, but it is just a delusion. And finally, after five years this relationship is over.”

Nikolaychuk has a son named Maksim.

”If you miss an opportunity don’t fill the eyes with tears, it will hide another better opportunity in front of you.”

On October 24, 2013, Nikolaychuk had her 2nd solo concert in Dnepropetrovsk. In the same month, she performed at Little Miss World in Bulgaria.

In 2013, she participated in the competition “Promotion,” which was organized by the Russian TV channel Music Box. She was selected as a winner.

Nikolaychuk earns most of her wealth from singing. Aida makes money from selling tickets to her concerts, sponsors, and royalties from her debut album. She also received some money from participating in X-Factor and Eurovision. Therefore, Aida Nikolaychuk has an estimated net worth of $0.2 million.