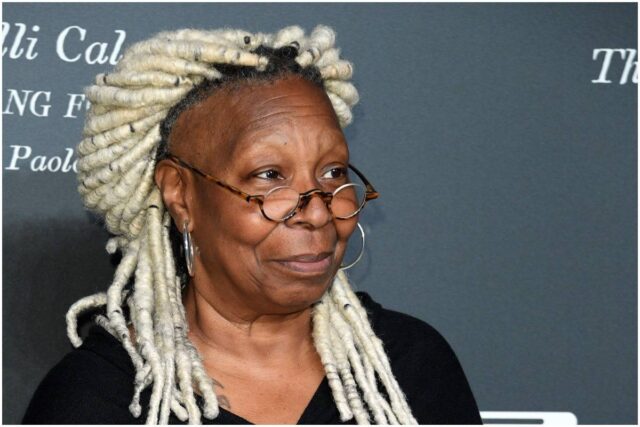 Whoopi Goldberg is an American actor (Whoopi expressed a preference for defining herself by the gender-neutral term “actor”), television personality, author, and comedian, who won the Academy Award for Best Supporting Actress for her performance in ”Ghost.”

Her dad, Robert James Johnson, Jr., was a clergyman, while her mother, Emma, was a nurse and a teacher. She has described her mom as a “stern, strong, and wise woman.”

Goldberg had dyslexia in her early years. At school, some of the kids called her ”dumb.”

At the age of eight, Goldberg acted in children’s theater and took the bus to plays, the ballet, and museums.

During the 1970s, she studied with theater teacher Uta Hagen at HB Studio in NYC.

Between 1979 and 1981, Whoopi lived in East Germany, working in many theater productions.

In 1987, Goldberg was awarded the Hans Christian Andersen Award for outstanding achievement by a dyslexic.

In January 1990, she performed in the situation comedy Bagdad Cafe.

In 1991, Whoopi appeared in the comedy Soapdish with an all-star cast featuring Elisabeth Shue,  Kevin Kline, and Sally Field. In the same year, she won an Academy Award for her performance in Ghost.

In 1994, Goldberg became the very first woman to host the Academy Awards solo. Later that year, Whoopy voiced the hyena Shenzi in the Disney film ”The Lion King.”

In 2001, Whoopi received the Mark Twain Prize for American Humor from the Kennedy Center.

On July 20, 2001, Goldberg received a Star on the Hollywood Walk of Fame at 6841 Hollywood Boulevard in Hollywood, California.

In 2002, she won a Tony Award as a producer for Best Musical, Thoroughly Modern Millie.

On September 17, 2003, she was appointed UNICEF Goodwill Ambassador.

In 2007, Goldberg embarked on a lengthy run as moderator of the talk show ”The View.”

In 2009, she won the Daytime Emmy Award for Outstanding Talk Show Host for her role on The View.

In 2012, Whoopi appeared in several TV series, including – The Middle, Suburgatory, Robot Chicken, and 666 Park Avenue.

In 2016, she performed in King of the Dancehall, The Tick, Ask the StoryBots, and Nashville.

In 2018, Goldberg portrayed Joan Ross in six episodes of the TV series ”Instinct.”

In 2019, Whoopi narrated the short film, The Most Magnificent Thing.

On October 1, 1994, Whoopi Goldberg married Lyle Trachtenberg and divorced in 1995.

Goldberg has a daughter, Alexandrea Martin (b. on May 9, 1973), with her first husband.

In 1994, Alexandrea received the title of Miss Golden Globe at the Golden Globe Awards. She has three children: son Mason and daughters Jerzey and Amarah Skye.

”The art of acting is to be other than what you are.”

”Normal is nothing more than a cycle on a washing machine.”

”Don’t be an actor because you think you’re going to get famous, because that’s luck.”

”I am where I am because I believe in all possibilities.”

Goldberg earned most of her wealth from performing in over 197 movies and TV series, including The Lion King, Jumpin’ Jack Flash, The Stinky & Dirty Show, A Muppets Christmas: Letters to Santa, Boys on the Side, Fatal Beauty, Moonlight & Valentino, Once Upon a Time in Wonderland, Miles from Tomorrowland, Clara’s Heart, Naked in New York, Godfather of Harlem, Made in America, If I Had Known I Was a Genius, A Very Sordid Wedding, and The Long Walk Home.

It is believed that Whoopi was the highest-paid actress in the film industry in the 90s.

She has her own production company, One Ho Productions. Goldberg also launched a medical marijuana startup in 2016.

In addition, Whoopi made money from selling copies of her books, including – The Unqualified Hostess: I Do It My Way, So You Can Too, Alice, Is It Just Me? Or Is It Nuts Out There?, Book, and Sugar Plum Ballerinas #1: Plum Fantastic series.

Goldberg serves as the executive producer of Wow, I Never Knew That!, Whoopi, and Just for Kicks. At The View, Goldberg has an annual salary of $8 million. She won a Daytime Emmy Award for her work on The View.

Therefore, American actor Whoopi Goldberg has an estimated net worth of $70 million.

READ THIS NEXT: Who is Rosie Perez?