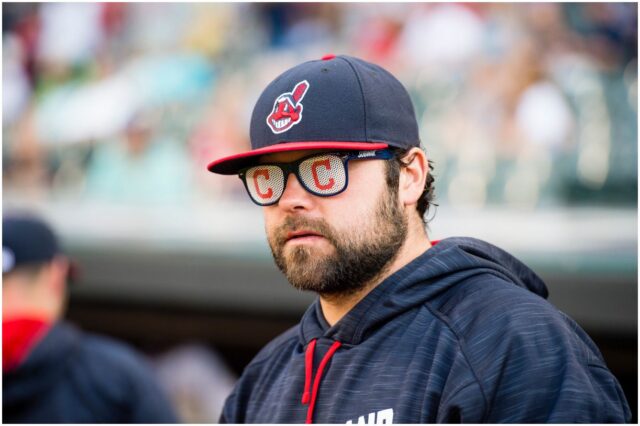 “He had an explosive breaking ball and a powerful fastball.”

Chamberlain was born on September 23, 1985, in Lincoln, Nebraska, USA, to parents Jackie Standley and Harlan Chamberlain.

His parents split up (they were not married) when he was 18 months old.

His father worked in a prison for about 27 years. He also suffered from polio in his youth.

Joba said about his father:

“I knew a lot of the prisoners. When they would get out, they would find my dad and thank him.”

“My dad never took his name out of the phone book.”

He went to Northeast High School in Lincoln, Nebraska.

After high school, Joba played college baseball for the Nebraska Cornhuskers, leading the team in ERA, complete games, and strikeouts. Furthermore, he took the Cornhuskers to the 2005 College World Series.

Joba spent the first part of the 2007 season on the Single-A Advanced Tampa Yankees in the Florida State League.

On August 7, 2007, Chamberlain signed with the New York Yankees, one of the most successful sports clubs in the world.

On August 4, 2008, Joba injured his shoulder in a game against the Texas Rangers.

In January 2012, Joba signed a 1-year, non-guaranteed contract worth about $1.675 million with the New York Yankees.

On December 13, 2013, Joba signed a one-year contract worth approximately $2.5 million, plus incentives, with the Tigers.

On July 21, 2015, he signed a minor league contract with the Toronto Blue Jays, the first Canadian team to win the World Series.

On August 14, 2015, he exercised an opt-out in his contract and became a free agent.

On August 16, 2015, Joba signed a contract with the Kansas City Royals, an American professional baseball team that competes in Major League Baseball.

On December 1, 2015, he signed a contract with the Cleveland Indians.

Terry Francona, the manager of the Cleveland Indians of Major League Baseball, said:

“He accepted the challenge. He came out in January and been a teammate since day one.”

Francona went on to say:

“He has really thrown the ball well this spring. He likes to compete and wants to win. Joba will be a real valuable piece.”

On January 20, 2017, Joba signed a contract with the Milwaukee Brewers worth about $1.375 million, plus incentives.

On March 22, 2017, Chamberlain was released by the Milwaukee Brewers.

On October 5, 2017, Joba announced his retirement.

On October 18, 2008, he was arrested near Lincoln, Nebraska for the suspicion of DUI (driving under the influence), having an open container of alcohol in his vehicle, and speeding.

His blood-alcohol level of 0.28 was over 3 times the legal limit.

Chamberlain pleaded guilty to drunk driving and was sentenced to probation in April 2009.

His arrest was captured on police video. Additionally, the video aired on the “Drivers 13” episode of truTV Presents: World’s Dumbest…. – a series that presents events that are recorded on camera.

Joba Chamberlain is not married.

Joba has a son, named Karter.

After he retired, Chamberlain said:

“No, it’s time to be a dad. Karter is in junior high and obviously this year I got to see him play a lot.”

“It was fun to watch. We went to Cooperstown [for a tournament] and that was fun for the boys.’’

In 2015, he was hurt while playing with Karter at a recreation spot. Chamberlain lost so much blood when he hurt his ankle that there were some concerns for his life.

Joba needed surgery for the injury since the bone broke through the skin.

Before this accident, Joba was working his way back from elbow ligament replacement surgery.

”I mean, running’s never easy, but it’s something that I don’t dread every day.”

”I liked to hit. I was a decent hitter – as every pitcher says they are.”

He is a descendant of the Ho-Chunk tribe, the Buffalo Clan. Joba even said:

His father nicknamed him “Joba.”

Joba has a tattoo that says, “Chunk Pride.”

He made an appearance in season 2, episode 15 of Man v. Food – a food reality TV series that premiered on December 3, 2008, on the Travel Channel.

On September 5, 2013, he was ejected for the 2nd time in his major league career in a 9–8 New York Yankees loss against the Red Sox.

Chamberlain earned most of his wealth from playing in Major League Baseball for Cleveland Indians, Kansas City Royals, Detroit Tigers, and the New York Yankees.

During his career in MLB, he made about $13 million from his contracts. For instance, his best season was 2014, when he earned $2.5 million, plus $500,000 as incentives, while his second-best season was 2013 when Joba earned $1,875 million, plus $275,000 as incentives. Chamberlain also made some money from sponsors. Therefore, former professional baseball relief pitcher Joba Chamberlain has an estimated net worth of $8.5 million.

READ THIS NEXT: Who is Nick Bare?