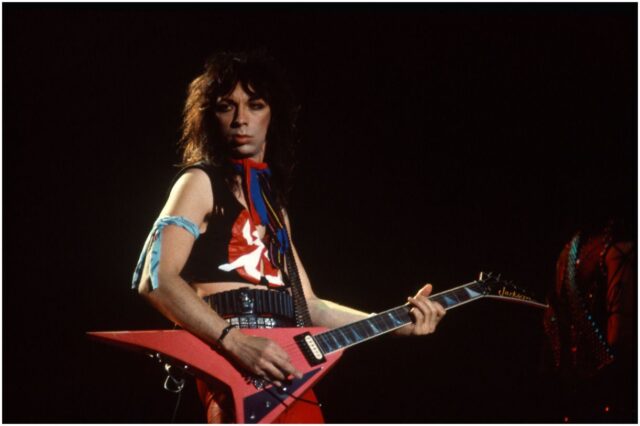 Vinnie Vincent (birth name – Vincent John Cusano) is an American songwriter and guitarist who is the founder of the band ”Vinnie Vincent Invasion.” He was also part of the American rock band KISS.

He was born on August 6, 1952, in Bridgeport, Connecticut, USA, to Alfonso Cusano and Theresa “Terri” (Ferraro).

In 1980, Vinnie moved to LA, where he became a staff songwriter for the TV series Joanie Loves Chachi and Happy Days.

Gene Simmons, the bassist and co-lead singer of Kiss, said that they initially met Vinnie through Adam Mitchell, a songwriter who co-wrote the title track for 1982’s Creatures of the Night.

Vincent left Kiss in 1984 after he had refused to sign a contract as an employee.

During an interview, Simmons declared:

“We decided to go on a sold-out European tour without the make up. We asked Vinnie Vincent if he wanted to come along.”

Gene Simmons went on to say:

”‘But before you come, you have to sign this contract. It’s not a negotiation. It’s an offer of employment. You must sign it for insurance purposes. If you don’t sign this, we can’t take you.’”

Vincent said that he refused to sign that contract since he thought he is underpaid. According to some reports, he also asked for a percentage of Kiss’s gross profits.

During an interview, Vinnie confessed:

“The problem was really simple. I was writing a lot of songs, and I felt us growing so much as a band, and I wanted them to want me. I know they wanted Eric [Carr, drums] — they loved Eric — but I didn’t feel that they wanted me.”

“And there was a contract they wanted me to sign. But I was bringing… My take-home pay was 550 dollars a week, so I never made any money being in the band.”

“He’s such a mysterious figure. In some ways, he’s the Howard Hughes of Kiss.”

“Vinnie has laid low for so long that it adds to his legend.”

In 1986 and 1987, the band opened for Alice Cooper and Iron Maiden, respectively. In 1986, the group released its debut album, titled – ”Vinnie Vincent Invasion.” It was listed number 8 on Kerrang!’s list of hard rock albums.

In May 1988, Vinnie Vincent Invasion released another album, called – ”All Systems Go.” It featured Jeff Scott Soto on backing vocals.

In 1992, Vinnie worked with Kiss as a songwriter on the band’s album “Revenge.” Vincent contributed to the songs I Just Wanna, Heart Of Chrome, and Unholy.

On August 27, 2008, a tribute album named – ”KISS MY ANKH: A Tribute To Vinnie Vincent” was released by SplitScreen Entertainment.

Featured artists on the album include:

The album consists of several recordings of songs from Vinnie’s careers with the Vinnie Vincent Invasion and Kiss.

In 1997, Vinnie sued Simmons and Kiss’s management company for “Lick It Up” royalties. Later, a federal judge in LA ruled against Vincent and awarded the defendants approximately $66,400 in attorney’s fees.

On July 23, 2018, Vinnie filed two applications with the US Patent and Trademark Office for the word mark “Vinnie Vincent’s Kiss.”

Simmons said in an interview about Vinnie:

“There’s something called the classic failure mechanism, which I was told by doctors and everything – I’m not saying he is one.”

“But there are people who simply cannot handle when things are starting to go their way.”

In 2011, Vincent has been arrested on suspicion of assault after his wife (Diane Cusano) accused him of hitting her in the face.

The former KISS guitarist was taken into custody. He was released on $10,000 bail.

Vinnie said in a statement:

“Please don’t believe everything you read. I would never hurt anyone – ever.”

Vincent went on to say:

“What has been reported is an absolutely inaccurate depiction of the events that occurred that evening. When it’s time, the truth will be known.”

Vinnie Vincent was married to AnnMarie Cusano. The couple divorced. Unfortunately, she was murdered in 1998, after their divorce.

In 2002, a Hartford Superior Court jury convicted Gregory McArthur of kidnapping, larceny, manslaughter, and felony murder charges in connection with the death of AnnMarie Cusano.

In 2006, Gregory McArthur had his appeal rejected by the state Appellate Court. McArthur said that two drug dealers were responsible for the slaying of AnnMarie in 1998.

“All I do is I play, I write, I record, I take care of my dogs. I have a really private, peaceful life now.”

“I agree with you about the music of today. It lacks style and emotion.”

There were some reports regarding his gender identity. In 2018, former KISS guitarist Vinnie Vincent has addressed these rumors:

“I get mistaken all the time for something else, but what can I do?”

Vincent earned most of his wealth from being the founder of the metal band Vinnie Vincent Invasion. His total worth is reduced due to the many lawsuits he lost against his former band, Kiss.

Therefore, American guitarist Vinnie Vincent has an estimated net worth of $1 million.

READ THIS NEXT: Who is Ricky Van Shelton?