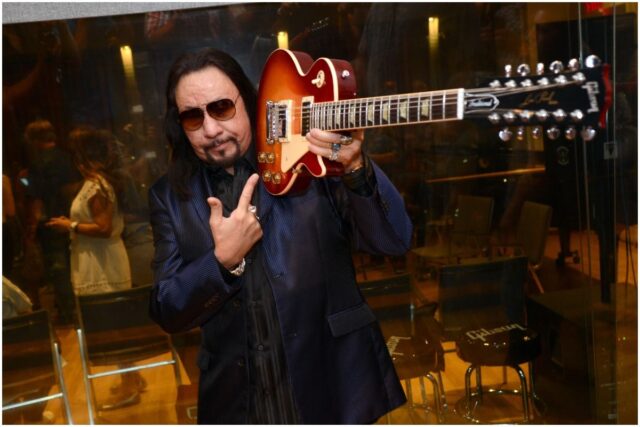 What is Ace Frehley’s net worth?

Ace Frehley is an American musician who gained fame as the lead guitarist for hard rock supergroup KISS.

His mother, Esther, was a homemaker, while his dad, Karl, was an electrical engineer.

He has a brother named Charles and an older sister, Nancy.

Ace started playing guitar at age 13. ”I loved playing the guitar, and I knew I was pretty good at it, so that’s what I wanted to do with my life,” Frehley later remembered.

The rock band was formed in NYC in January 1973 by Frehley, Peter Criss, Gene Simmons, and  Paul Stanley.

On February 18, 1974, the band released their self entitled debut album. It was recorded at Bell Sound Studios in NYC.

On October 22, 1974, KISS released the album ”Hotter Than Hell” via Casablanca Records. Ace composed two songs from the album.

On March 18, 1975, KISS released another album titled – ”Dressed to Kill.” It reached number #32 on the Billboard 200 album chart. Frehley wrote the song “Getaway.”

He left Kiss in December 1982. Ace was replaced in Kiss by Vinnie Vincent.

In 1983, Frehley formed a new band, Frehley’s Comet, which consisted of Rob Sabino on Keyboards, Anton Fig on Drums, Richie Scarlet on Guitar and Vocals, and John Regan on bass.

Ace rejoined Kiss on their successful reunion tour in 1996. ”The first year of that reunion tour, we grossed $215 million, and that was 20 years ago.” Frehley said in 2018. He added: ”So what would it be today, probably double that? Half a billion? I’m there.”

”There were many many nights when I was looking around the stage and going ‘This is magic,’” Paul Stanley said about the tour.

On August 11, 1999, KISS received a Star on the Hollywood Walk of Fame for Recording at 7080 Hollywood Boulevard in Hollywood.

In 2011, Ace published the memoir, No Regrets. ”We packed lightly, and we traveled fast,” Ace wrote in his memoir. ”As a consequence, our costumes were often thrown together in a single pile and packed into one suitcase, sometimes without even being washed.”

On October 19, 2018, Frehley released his eighth album, Spaceman. Gene Simmons co-wrote two tracks on the album (Your Wish Is My Command and Without You I’m Nothing).

On September 18, 2020, Ace released Origins Vol. 2. ”These albums are becoming fun,” Frehley said. ”I just re-signed with eOne, and they want an ‘Origins Vol. 3’ after the next studio record.”

”Kiss once took an IQ test, and I was on top,” Frehley confessed in 2012. ”I guess my brain was working good that morning thank God for good genes.”

Until 2019, Ace was in a relationship for about 11 years with Rachael Gordon. They met while Frehley was on tour in 2008.

Ace has a daughter named Monique (b. on July 9, 1980). ”One of the greatest gifts I’ve ever gotten is my daughter,” Frehley once said.

”For me, it’s about the music, and it always has been.”

”People, y’know, they either love us, or they hate us; there’s no middle ground.”

Frehley earned most of his wealth from being part of the rock band KISS, which has sold more than 80 million records. While he was with KISS, Ace was involved in the following albums: Psycho Circus, Music from “The Elder,” Unmasked, Dynasty, Love Gun, Rock and Roll Over, Destroyer, Dressed to Kill, Hotter Than Hell, and Kiss.

Therefore, American musician Ace Frehley has an estimated net worth of $1.5 million.

READ THIS NEXT: Who is Robin Thicke?