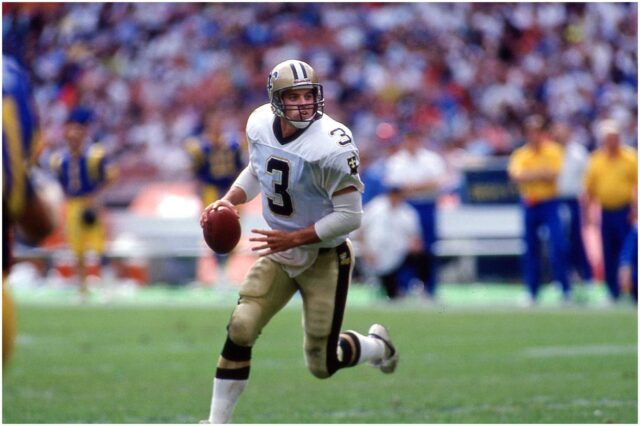 Bobby Hebert (birth name – Bobby Joseph Hebert Jr.), nicknamed – “The Cajun Cannon,” is an American former NFL quarterback and a member of the Louisiana Sports Hall of Fame and the Saints Hall of Fame.

“The Cajun Cannon” is considered one of the greatest players to ever play in the USFL, an American football league which played for 3 seasons, 1983 through 1985.

The Michigan Panthers were a professional American football team that played in the USFL in the mid-1980s.

In 1983, Hebert was named Sporting News USFL Player Of Year. Additionally, Bobby was named the Most Valuable Player in the Championship game.

In 1985, the Michigan Panthers were merged with the Oakland Invaders.

Bobby again led his team to the finals against the Stars, but his team lost 28–24.

In 1985, he played his first season in the NFL (National Football League) for New Orleans Saints, a member of the league’s NFC South division. It was founded on November 1, 1966, by the city of New Orleans, David Dixon, and John W. Mecom Jr.

In 1991 and 1992, Bobby led the New Orleans Saints to remarkable playoff appearances.

In 1993, Hebert was signed by the Atlanta Falcons.

The Atlanta Falcons compete in the NFL as a member club of the league’s NFC South division.

Some of his personal records are:

In the same year of his divorce, Hebert married Joan.

With his first wife, he has four children, named – Cammy, T-Bob (Bobby), Ryan, and Beaux.

From 2007 to 2012, T-Bob was a center at Louisiana State University. In 2012, T-Bob signed a contract with the St. Louis Rams. In the present day, he is a successful radio host in Nola.

”Having 2 lucky bounces that could have been potential fumbles didn’t hurt either.”

”There are no words for that debacle in the dome yesterday. Good news is the fat lady hasn’t sung yet. Saints still control their destiny.”

”Happy Mother’s day to all of the mom’s out there, and especially to my mom, Paula Hebert!”

”There are no words that can express the absolute shock and senselessness of Will Smith’s death {former Saints defensive end}. Thoughts and prayers, for Will’s family.”

Bobby was famously referenced in an episode of “Seinfeld,” named “The Big Salad.”

Costanza is fascinated by the way his name is pronounced. He said:

”You know what’s interesting. The quarterback for the Atlanta Falcons is Bobby Hebert. No “r” which I find fascinating.”

In 1991, “The Cajun Cannon” was featured on the cover of Sports Illustrated, an American sports magazine that is published by Meredith Corporation and owned by Authentic Brands Group.

In 2012, due to the excessive cheering during Saturday night’s Alabama-LSU game, Bobby was escorted out of the Tiger Stadium press box.

Herbert is the USFL’s all-time leader in passing yardage. According to statistics, in three years in the United States Football League, he completed 773 of 1,407 passes for 13,137 passing yards.

Hebert earned most of his wealth by playing as a professional American football player. Bobby has played professionally in the USFL and NFL for the Atlanta Falcons, New Orleans Saints, Oakland Invaders, and Michigan Panthers.

Bobby was a star in the short-lived USFL, winning a championship with the Michigan Panthers in 1983. In the same year, he was named quarterback on The Sporting News’ USFL all-star team, Sporting News Player of the Year, and  MVP of the championship game.

When Hebert signed for the New Orleans Saints, he received a $1.2 million signing bonus.

In 2014, Bobby opened a sports bar and restaurant on Metairie’s Veterans Memorial Boulevard. It is open Friday and Saturday from 11 a.m–1 a.m and Sunday to Thursday from 11 a.m.–11 p.m. Therefore, Bobby Hebert has an estimated net worth of $6.5 million.

READ THIS NEXT: Who is Jennifer Jo Cobb?