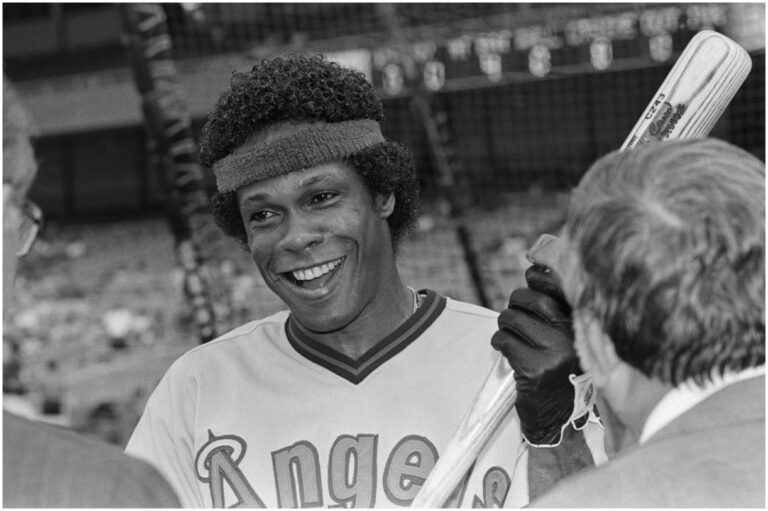 Carew hit an amazing .328 over his career.

“He has no weakness as a hitter. Anything you throw he can handle.”

“The astonishing thing about (Rod) Carew is that he hits everybody. You think you spot a weakness in him, and it may work for 3 or 4 at-bats, but then he catches on and its bang-bang-bang all over again.”

Rod moved with his family to New York when he was 14 years old.

He played for the Bronx Cavaliers. There, he was found by Minnesota Twins’ scout Monroe Katz.

During the 1960s, he served a 6-year commitment in the US Marine Corps Reserve as a combat engineer.

Carew said about his time in the US Army:

“When I joined the Marine Corps, it was a life-changing event for me because I learned about discipline.”

In 1991, he became only the 23rd player elected to the Baseball Hall of Fame in Cooperstown, New York.

In the same year, in recognition of his accomplishments on and off the field, he received the Muscular Dystrophy Association Life Time Achievement Award.

Later that year, Rod was hired as the Angels’ hitting coach. He also worked as a coach for the Milwaukee Brewers.

In 2002, Carew was inducted into the Marine Corps Sports Hall of Fame.

In 2005, he was named the 2nd baseman on the Major League Baseball Latino Legends Team.

In 2015, Carew suffered a heart attack while playing golf.

“I just want you guys to understand how fatal this can be.”

Rod went on to say:

“Get yourselves checked. Don’t wait for it to happen.”

In 2016. he has undergone a successful kidney and heart transplant.

The donor was Konrad Reuland, a former NFL player, who suffered a brain aneurysm on November 28, 2016.

Konrad Reuland died at the UCLA Medical Center on December 12. One of his kidneys and his heart were donated and transplanted into Carew.

“This is, to me, almost like a miracle. I feel great. My heart’s roaring.”

In a different interview, Rod declared:

“I will take care of this one because I’ve been given a second chance, and God knows how I feel and what I’m going to do for him.”

After one month since the transplant, Rod said his doctors are happy with his progress, and there were no signs of rejection.

“I’m doing great. I just want to get the news out to people that they need to get their hearts checked.”

In 2018, in honor of Konrad Reuland, Rod participated in the Rose Parade aboard the Donate Life float on New Year’s Day.

Rod has a son, Devon, and two daughters, Cheyenne and Michelle, with his first wife – Marilynn Levy.

His 18-year-old daughter, Michelle, got sick with leukemia, a group of blood cancers. After an umbilical cord blood transplant was performed in an attempt to save her life, Michelle died on April 17, 1996.

”You just can’t spend any time second-guessing yourself.”

”We have to help others. I hope that some of the young players today understand that.”

”Hitting is an art, but not an exact science.”

Carew earned most of his wealth from playing professional baseball. Only 3 other professional players have bettered Rod’s 15 consecutive seasons of a .300 or better batting average.

Additionally, Carew won seven batting titles during his career and was one of the few players to surpass the 3,000-hit plateau. After his retirement, he worked as a baseball coach. Furthermore, Rod has published 4 books which can be purchased on Amazon. Therefore, Rod Carew has an estimated net worth of $6.2 million.