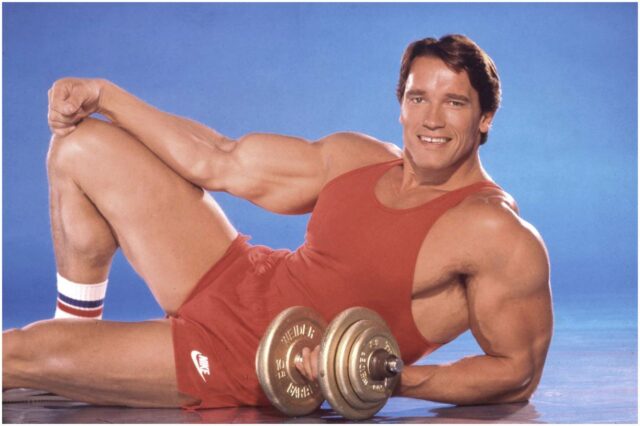 Arnold Schwarzenegger is an Austrian-American actor who has earned the nickname, “the terminator,” for appearing in  Cameron’s ‘Terminator’ franchise. Like that wasn’t enough, Arnold served twice as the Governor of California and married into the prestigious Kennedy family.

Arnold’s father, Gustav, was the local police chief, and the family lived above the police station where Gustav worked.

He first got into organized competitive sports at the age of 10. Schwarzenegger played soccer passionately for almost five years.

In 1965, he entered the Austrian army to fulfill his obligatory one year of service.

By the time he reached the age of 20, Schwarzenegger was the youngest person to become Mr. Universe.

In 1967, Arnold competed in and won the Munich stone-lifting contest. In the event, Schwarzenegger lifted a stone weighing 508 German pounds (560 lbs/254 kg) between his legs while standing on two foot rests before successfully placing it on the raised platform.

In 1968, Schwarzenegger moved to America with $27,000 to his name and proceeded to make his 1st million dollars not by acting but through savvy real-estate investments. In the same year, he started his own mail-order business under the name Arnold Strong, selling training supplies.

In 1970, Arnold made his debut on the big screen when he played Hercules in Hercules in New York.

In 1979, Arnold graduated from the University of Wisconsin-Superior with a major in international marketing of fitness and business administration.

His big breakthrough was in 1982 with Conan the Barbarian and the sequel Conan the Destroyer (1984).

In 1984, he gained worldwide fame as a Hollywood action film icon, noted for his lead role in the movie ”Terminator.”

During an interview posted by Beerdy, Arnold said about his work with Terminator director James Cameron:

”James Cameron is one person before the movie starts and another person when the movie begins. And he is sometimes unrecognizable because he locks into kind of a mode…”

”Like a machine and he clicks into that, and he only sees the movie. Which is a really great asset to have this kind of a strong vision and determination and passion and talent. But don’t get in his way.”

In 2003, Arnold shocked the nation when he announced on “The Tonight Show” that he was running for Governor of California.

Schwarzenegger was elected governor of California in 2003 and served the state in the political seat until 2010. In 2006, he easily won his bid for re-election.

As governor, Arnold was California’s most effective marketing tool, traveling across the country and around the world promoting cutting-edge technologies, California-grown products, and the state’s diverse travel destinations.

In 2010, he appeared alongside Jason Statham, Sylvester Stallone, Bruce Willis, and Jet Li in the ensemble action film ”The Expendables.”

In July 2011, a museum dedicated to Arnold’s life opened in his childhood home in Thal, Austria.

Shriver filed for divorce after learning that Schwarzenegger had fathered a child – Joseph Baena – with their housekeeper Mildred Patricia “Patty” Baena.

”And you can’t point the finger at anyone else. So yeah, I was disappointed in it. It’s always easy to be smart in hindsight. The thing was how do you make the best of that situation?”

Arnold and Maria have 4 children:

”Congratulations Joseph! Four years of hard work studying business at Pepperdine and today is your big day! You have earned all of the celebration and I’m so proud of you.”

In 2018, Patrick had his first leading role in ”Midnight Sun,” a romantic drama. In 2019, he performed in ”Daniel Isn’t Real,” a psychological horror film directed by Adam Egypt Mortimer. In the movie, Patrick has a sex scene. Arnold said:

‘Two days ago, I watched at night my son’s movie, and it was just wild watching him.”

”If you want to turn a vision into reality, you have to give 100% and never stop believing in your dream.”

”The meaning of life is not simply to exist, to survive, but to move ahead, to go up, to achieve, to conquer.”

“Failure is not an option. Everyone has to succeed.”

“If I can see it and believe it, then I can achieve it.”

”What is the point of being on this Earth if you are going to be like everyone else?”

“You have to remember something: Everybody pities the weak; jealousy you have to earn.”

His diet is mostly vegan. He said for Men’s Health:

“Now I eat more oatmeal, and greens, and vegetables, and healthy foods.”

“I stay away more from the meats and more from animal products, and animal proteins, because there was this misconception that that’s the only way you get big and strong, so now I back off that and I feel much better.”

Arnold starred alongside Danny DeVito in the comedy film ”Twins.”

His performance as The Terminator in the “Terminator” films is ranked #40 on Premiere Magazine’s 100 Greatest Movie Characters of All Time.

The Green Party of Austria has resolved to strip Arnold of his Austrian citizenship due to his support for the death penalty.

In 1971, his brother, Meinhard, died in an automobile accident.

Schwarzenegger was voted the 53rd Greatest Movie Star of all time by Entertainment Weekly.

He is only the 2nd governor in California’s history to be born in a foreign country.

The Guinness Book of World Records once called Arnold ”the most perfectly developed man in the history of the world.”

“This piece of black oak has the craziest grain of anything I’ve ever carved.”

He won the Mr. Olympia title seven times and the Mr. Universe title five times. Arnold admitted to using performance-enhancing anabolic steroids, although, in the 1970s, this was legal.

Schwarzenegger was the first private citizen in the U.S. to own a Humvee.

Therefore, Arnold Schwarzenegger has an estimated net worth of $450 million.

READ THIS NEXT: Who is Tracy Nelson?