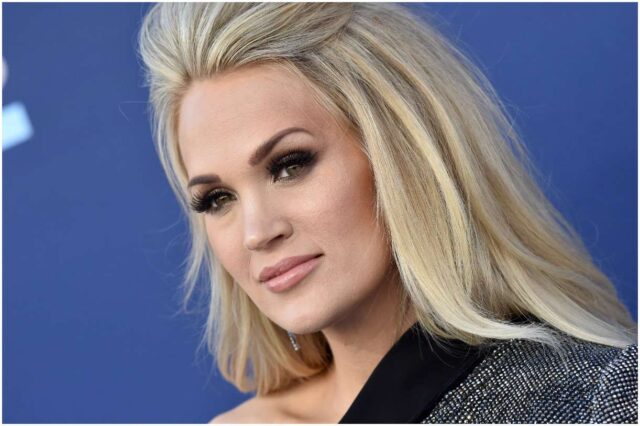 Underwood is the daughter of an elementary school teacher and a sawmill worker.

She has two older sisters –  Shanna and Stephanie Underwood.

Carrie grew up on a farm in Checotah, Oklahoma. She said about her childhood:

”We had one stoplight, one school. Choir, band, football, basketball and baseball.”

She started singing at her local church, First Free Will Baptist Church, at the age of three.

During high school, she played for the school’s softball and basketball teams and was a member of the Honor Society.

During college, she was a member of the Alpha Iota chapter of Sigma Sigma Sigma sorority, worked at the zoo and a pizzeria, and competed in beauty pageants.

In 2005, Underwood rose to fame as the winner of the 4th season of American Idol. Her winnings included a Ford Mustang convertible, use of a private jet for a year, and a recording contract worth at least a million dollars.

During the finale, Carrie sang with Rascal Flatts on “Bless the Broken Road.”

In December 2005, she was named Oklahoman of the Year by Oklahoma Today.

In 2006, Carrie performed at halftime of the Thanksgiving Day football game at Texas Stadium in Irving, Texas.

In 2008, Underwood received ACM Award for Female Vocalist of the Year.

On May 10, 2008, she was inducted into the Grand Ole Opry by country star Garth Brooks.

In 2009, Carrie was inducted into the Oklahoma Music Hall of Fame. Later that year, she released her 3rd studio album, Play On.

In 2010, she made her acting debut in a guest-starring role in an episode of the CBS sitcom ”How I Met Your Mother.”

In 2012, Underwood starred as Maria von Trapp in NBC’s live broadcast of The Sound of Music.

On March 3, 2020, she will release her first book, titled – ”Find Your Path: Honor Your Body, Fuel Your Soul and Get Strong with the Fit52 Life.”

”It was completely mutual. We broke up over text so … it’s like ‘peace out.’”

Their wedding cost approximately $500,000. The wedding ring is reportedly worth about $150,000. It includes 12 carats worth of diamonds.

Carrie and Mike got engaged in December 2009. The pair started to date after they met at one of her concerts in late 2008.

In 2010, Mike and Carrie bought a mansion on 11 acres near Ottawa. Recently, the two put the mansion up for sale at an asking price of $2.2 million.

Fischer and Underwood welcomed their first child, a son named Isaiah, in 2015. She said in an interview:

”I never knew what it was like to be a mom and a wife and a woman in this business until I became those things.”

In January of 2019, the couple welcomed their second son, Jacob Bryan.

During an interview, Carrie confessed:

”Being almost five years old, [Isaiah is] just so helpful, and he looks out for his little brother,” she said in the People interview.

Underwood also said that she and her husband are both doing all they can to make sure their sons don’t grow up attached to material things.

She suffered three miscarriages throughout 2017 and early 2018.

”Successful people have a social responsibility to make the world a better place and not just take from it.”

”I’ve never really been anywhere, and now I get to go everywhere.”

”My best performances are when I’m lost in the songs. Just surrender to the music, really throw yourself into it.”

She has performed with Joan Jett and Aerosmith.

She is a huge fan of Star Trek: The Next Generation.

Her favorite movies are horror movies.

”If you told me I could never sing again, I’d say that was horrible, but it’s not my life.”

Underwood went on to say:

”If you told me I could never be around animals again, I would just die.”

In November 2017, Underwood fell on the steps outside of her house. After the accident, she remained with 40 stitches on her face as well as a broken wrist.

She has a rat terrier dog named Ace.

Carrie is a practicing Christian.

Another former winner of American Idol is Trent Harmon.

Underwood earned most of her wealth from her music. Carrie’s first 27 singles reached the top 10 of both the Country Airplay and Hot Country Songs charts.

Her albums have sold more than 70 million copies.

Moreover, she made some money from performing in several movies and TV shows.

In 2015, she released a fitness clothing line named CALIA by Carrie Underwood.

Forbes has declared Carrie the most successful American Idol winner.

Therefore, country singer Carrie Underwood has an estimated net worth of $190 million.

READ THIS NEXT: Is Sam Bailey married?