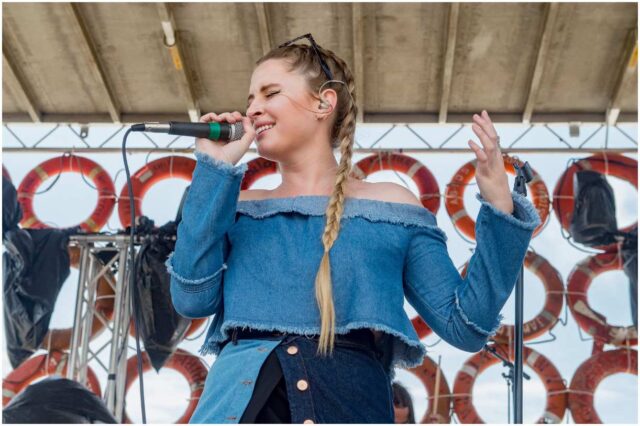 What is Cari Fletcher’s net worth?

Cari Fletcher is a pop singer and actress who simply goes by the name of ”FLETCHER.”

She was born on March 19, 1994, in New Jersey, USA, as Cari Elise Fletcher. The singer has a younger brother named Bobby.

At the age of 5, Cari began taking singing lessons and soon after learned how to play several instruments, including the piano, flute, and clarinet.

During high school, she was the team captain of the Girls Varsity Volleyball team.

At age 14, Cari began writing music by herself and with friends and made her dreams come true by attending New York University. She said:

”For as long as I can remember, I’ve loved music. My mom always tells me that I was singing before I ever even spoke.”

Cari went on to say:

”From a really early age, I found such a passion and love for singing and music and I’ve never wanted to do anything else.”

In 2015, she released the single “War Paint,” which topped the Spotify Viral Chart upon release and now has more than 20 million listens on Spotify.

Upon the release of the music video, Cari declared:

“I wish when I was a 16-year-old girl that I had a video like that to watch to see that it’s super normal, and two girls that are into each other and falling in love and having an incredible time is not some huge dramatic overly sexualized weird thing.”

Since the release of her debut EP, Cari has earned over 62 million streams on Spotify. In addition, she was named the ”Jennifer Lawrence of Music,” among other publications that have called her an Artist to Watch in 2017 – including TIME and Entertainment Weekly.

During an interview, the artist said:

”It was crazy, it became the most virally shared track on Spotify and number two globally for about two weeks.”

On February 12, 2019, she released “Undrunk,” one of the first great pop songs of 2019. Produced by Malay, the relatable anthem finds Cari dealing with the emotional aftermath of a breakup.

The X Factor is a television music competition franchise that originated in the UK, where it was devised as a replacement for Pop Idol. Also, it has been adapted in various countries. The show was created by British producer Simon Cowell and his company SYCOtv.

In 2018, The X Factor show underwent a dramatic makeover. For instance, each judge now has a fancy new button called the ”Golden X” that allows them to send a contestant/group of their choosing straight through to Judges’ Houses.

On June 8, 2011, Cari auditioned in front of the X-Factor Celebrity judges.

Shannon rose to fame as one-half of the YouTube channel NowThisIsLiving. Beveridge was born in Carrollton, TX, and lived in Norman, OK, before moving to Los Angeles, CA.

Fletcher and Beveridge break-up in 2020.

Her EP The S(ex) Tapes serves as a map of the repercussions that follow a difficult breakup.

She self-identifies beyond any specific label and infuses her music and visuals with stories that neutralize the stigma of otherness prominent in many LGBTQ creations. She said:

”It’s so stupid that people have to even come out. The more we talk about it, the less in the future that will have to happen.”

In another interview, she explained:

“I just express my opinion and stance on sexual fluidity and love and whatever that may be.”

In the fall of 2017, she announced her first-ever headlining tour to support her forthcoming project.

In Spring 2011, she played Sandy in Wall High School’s production of “Grease.”

When asked if she believes that there is a double standard for male and female artists, she replied:

”I feel like this is, especially in this YouTube age that we’re in, like girls go crazy over these shirtless photos of male Vine stars basically naked, but when a girl does something like that she’s a slut and a whore.”

When asked about her plans for the future, the artist said:

”I’m most excited to get out and meet all of the fans and people who have been so incredibly supportive and responsive to my music.”

Fletcher earned most of her wealth by selling tickets to her concerts, advertisements on her YouTube channel, sponsors, and selling copies of her EPs (The S(ex) Tapes, You Ruined New York City for Me, and Finding Fletcher).

Therefore, American singer Cari Fletcher has an estimated net worth of $500,000.

READ THIS NEXT: Who is Tye Tribbett’s wife?