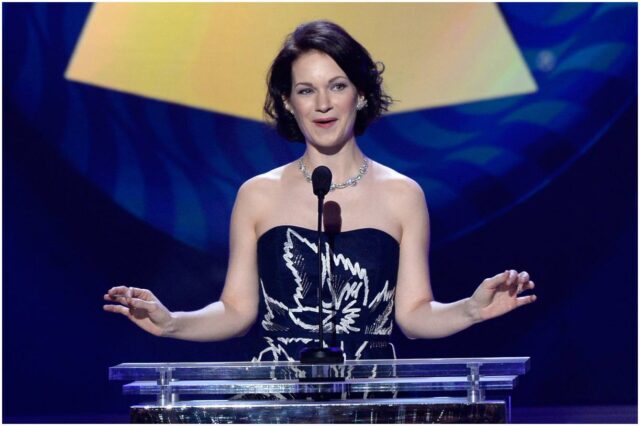 Hilary Hahn is a Grammy Award-winning violinist who performed Bach with the New York Philharmonic and the London Symphony Orchestra.

Hahn began playing the violin about 30 days before her 4th birthday in the Suzuki Program of Baltimore’s Peabody Institute. Between 1984 and 1989, she studied under Russian émigré Klara Berkovich.

In 1990, at age 10, Hilary was admitted to the Curtis Institute of Music in Philadelphia, where she became a student of Jascha Brodsky, a Jewish Russian-American teacher and violinist.

In 1991, at age 11, she made her major orchestral debut with the Baltimore Symphony Orchestra.

In 1994, Hilary made her international debut by performing with the Bernstein Serenade in Hungary and Ivan Fischer (a Hungarian conductor and composer).

At age 16, Hahn signed an exclusive record deal with Sony. Hilary made two recordings under her exclusive contract for Sony.

In 1996, Hilary served as an artist and a member of the chamber music mentoring program of The Chamber Music Society of Lincoln Center.

Between 1995 and 2000, Hahn performed and studied chamber music at the Marlboro Music Festival in Vermont.

In 1999, Hilary commissioned Edgar Meyer (an American bassist and composer) to write a concerto.

In 1999, she said that she had played solo Johann Sebastian Bach pieces daily since she was 8. She stated:

”Bach is, for me, the touchstone that keeps my playing honest … one can’t fake things in Bach, and if one gets all of them to work, the music sings in the most wonderful way.”

”Bach is very challenging to play and musically demanding to make clear.”

In 2001, she was named “America’s Best Young Classical Musician” by Time magazine.

In a December 2001 interview, she stated that of all musical disciplines, she is most interested in performance.

In 2003, she signed a recording contract with Deutsche Grammophon (a German classical music record label that was the precursor of the corporation PolyGram).

In the same year, her first Grammy came for her Brahms and Stravinsky concerto album.

In 2004, she began her film recording career as the soloist for ”The Village.” The film is a 2004 American psychological thriller mystery drama film which is about a village whose population lives in fear of creatures inhabiting the woods beyond it, referred to as “Those We Don’t Speak Of.” The film was produced, written, and directed by M. Night Shyamalan and starring:

In 2005. she branched out into crossover music in a series of concerts with American songwriter and singer Tom Brosseau.

In 2007, she played in Vatican City as part of the celebrations for Pope Benedict XVI together with conductor Gustavo Dudamel and the Stuttgart Radio Symphony Orchestra.

On January 14, 2010, she appeared on The Tonight Show with Conan O’Brien for an interview in support of her album, Bach: Violin & Voice.

In 2012, she released an album with German composer and pianist Hauschka entitled Silfra.

In June 2014, Hilary was awarded the Glashütte Original MusikFestspiel-Preis of the Dresden Music Festival.

In 2015, Hahn won her 3rd Grammy Award for best chamber music or small-ensemble performance for her album ”In 27 Pieces: The Hilary Hahn Encores.”

In 2016, she held several recital tours across Europe, Japan, and the United States.

In 2017, Hilary returned to repertoire from the 19th and 20th centuries, performing Dvořák (a Czech composer who often employed rhythms of the folk music of his native Bohemia), the Tchaikovsky, and first Prokofiev violin concertos across Europe and the US.

Her violin is an 1864 copy of Paganini’s Cannone made by Jean-Baptiste Vuillaume (a French businessman, luthier, and inventor). During an interview on Danish television, Hilary said that she almost never leaves her instrument out of sight.

In September 2019, Hilary announced that she is taking a year-long sabbatical.

Hilary Hahn is married to a German composer and pianist who primarily records and performs under the name Hauschka.

“My husband and I are expecting our first baby mid-summer! I am usually very private about my personal life … but this is such a different kind of news that I wanted to share it directly.”

“Baby #2 has arrived, joining big sister Zelda in the family! We’re happy and healthy. Welcome to the world, little Nadia!”

In a 1999 interview, she cited people influential to her development as a musician, including:

A few composers have written works especially for her, including:

In interviews, Hahn mentioned that Johann Sebastian Bach was her favorite composer and that playing his work helped her stay at her best. She quoted:

“There’s nothing I really wanted to record more than Bach. I can work on it for a long time and keep discovering more things that surprise me every time.”

Hahn earned most of her wealth by selling tickets to her concerts (she has performed nearly 2000 concerts on five continents, 43 countries, and 291 cities), selling her albums, and sponsors.

Therefore, American violinist Hilary Hahn has an estimated net worth of $11 million.

READ THIS NEXT: Things You Didn’t Know About Mozart La Para