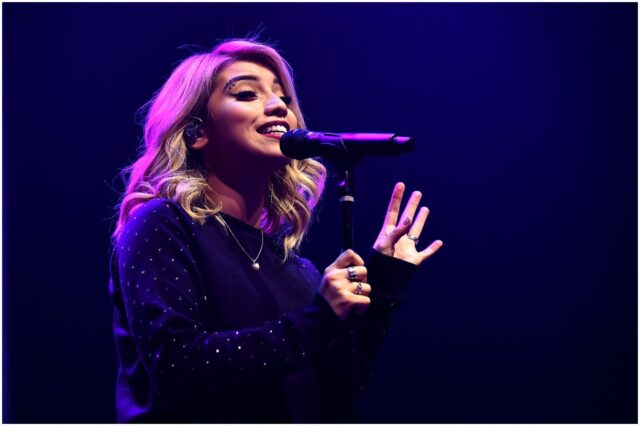 Kirstin Maldonado is an American songwriter and singer who is best known as a member of Pentatonix, an Arlington, Texas-based group that won the 3rd season of NBC’s a cappella competition ”The Sing-Off.”

Maldonado was born on May 16, 1992, in Fort Worth, Texas, United States, to Spanish-Italian mother Angelica Maldonado and Mexican father Michael Cisneros. Maldonado has been raised by her mother in Arlington, Texas.

At eight years old, Maldonado sang at her mother’s wedding reception, ultimately convincing her mother to enroll her in voice lessons.

There, she began her classical training and was a member of the Texas All-State Choir for about three years. In addition, in high school, she met Scott Hoying, a member of her future band.

After high school, Kirstin joined The University of Oklahoma, where she was a Musical Theatre Performance major. But, this would not last long as Maldonado soon dropped out of the university in order to make Pentatonix happen.

In 2011, Scott Hoying contacted Maldonado to participate in NBC’s acapella competition The Sing-Off.

The group also included Mitch Grass, Kevin Olusola, and Avi Kaplan. Together, they formed Pentatonix, which became the winner of the third season of The Sing-Off.

”I’ve known Mitch since I was 8 years old. I was friends with Scott since high school so we’re all friends.”

”It’s never really weird unless those times when there’s one dressing room. We’re all like one big family.”

On November 13, 2012, the group released their Christmas EP, ‘PTXmas,’ a deluxe edition of which was re-released the following year with two new tracks.

Their 2015 self-titled album is certified gold after debuting #1 on Billboard’s 200.

They have released a total of 5 extended plays, seven studio albums, 26 music videos, and eight singles and have won 3 Grammy Awards, apart from numerous other nominations and awards.

In January 2016, Kirstin performed the song “Somewhere Over the Rainbow” at the World Dog Awards in honor of the dogs who have played the role of Toto from the iconic story about The Wizard of Oz.

On December 11, 2018, the group performed “Rockin’ Around the Christmas Tree” on The Talk.

Kirstin Maldonado got engaged to Jeremy Michael Lewis on May 29, 2016, after three years of dating.

Jeremy Michael Lewis is an entrepreneur and a singer who is also the Vice President at a content broadcasting company known as Kastr.

He was born on January 22, 1992, in Rockford, Illinois. Lewis competed as a soloist on Season four of The Sing-Off in 2013 alongside the acoUstiKats.

Kirstin met Jeremy Michael Lewis during season four of The Sing-Off, in August 2013.

“I met him a season of ‘The Sing-Off’ after ours,” said Maldonado, referring to her “Sing-Off” stint with Pentatonix. “He was a percussion major and he sang, and he’s really smart and really brilliant.”

”So, I kind of always went to him for advice anyway … I feel like he’s very honest with me in a good way. We both are very opposite in good ways and we push each other to be better.”

Kirstin said during an interview:

“I have a dress. We have a location. We have the bridesmaid dresses. All the decisions are starting to come. We’re able to see them visually — so now I’m able to get a better sense of what is happening.”

”Until you nail the dress or the colors, you’re like, ‘What’s happening?’”

She said in a different interview:

“I never planned out my wedding. My mom and dad weren’t together, so I never thought I would get married.”

”I thought I would move to New York and be on Broadway; that was my goal. I was very work-focused. But I found love!”

In 2017, the couple postponed their wedding to work on certain unstated “issues.” Later, they split up.

READ MORE: Who is Amil?

In February 2016, Pentatonix won a Grammy for their song ”Dance of the Sugar Plum Fairy.”

When asked about with who she wants to go on a tour, Kirstin replied:

”Oh my goodness! Um, I know we already toured with her as Pentatonix, but Kelly Clarkson is really amazing. I just admire her so much. Her or maybe Lady Gaga… or another really powerful female.”

”I’ve never really gotten to see a bunch of shows because we’re constantly touring. I feel like I miss a lot. I loved being on the Kelly tour and getting to watch her and the band. She had a really cool vibe.”

Maldonado has at least eight tattoos on her body.

She stylizes her name as kirstin™. The (TM) stands for “Taylor Maldonado,” and not as a trademark.

Also, Kirstin has acted as Liz Duran in an episode of Bones.

Therefore, singer Kirstin Maldonado has an estimated net worth of $8 million.

READ THIS NEXT: TK-N-Cash Net Worth