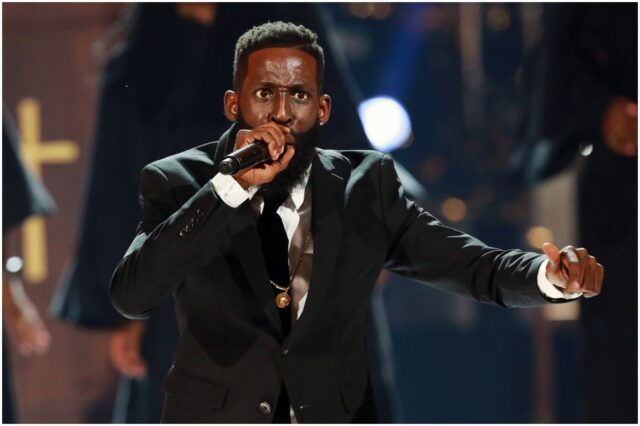 “Things in the world can come against us so aggressively. Whether it’s bills or health or personal struggles, it can get harsh, but hold on! Hold on! We’ve got to sing louder for the God who is stronger.”

Tribbett has two sisters as well as a brother named Thaddaeus Tribbett. His mother was a minister and a DJ, whereas his father was a pastor.

Tye was raised in an Apostolic Pentecostal church in Camden, New Jersey.

In 1996, he founded a gospel choir, Greater Anointing (G.A.), consisting of a group of friends and family whose hearts were set simply on praising the Creator through the gift of great music.

In 1998, they broke into the popular mainstream with a group of performances on The Prince of Egypt (Inspirational) album, one of 3 high-profile soundtrack collections that were released for the Academy Award-winning animated film from DreamWorks.

In 2000, Tye toured with Faith Hill, leading to work with Usher, Don Henley, Will Smith, Sting, and Justin Timberlake.

On Friday, November 30, 2007, Tribbett performed at The Experience Concert in Lagos, Nigeria, alongside Cece Winans, Kurt Carr, Israel Houghton, Don Moen, and a host of others. The inspirational concert was organized by the House on the Rock Church.

In 2009, he decided to retire from Greater Anointing, releasing them to pursue personal dreams and goals while he auditioned for new background singers.

In 2010, Tribbett released his first album without GA, simply titled Fresh. He declared:

“Fresh means restored, new creature and it’s my announcement that nothing is the same, my thinking, my business, my patterns, everything is new.”

For ”Fresh,” he produced and wrote a majority of the album; however, Tribbett also solicited assistance from a small handful of talented artists along the way for the very first time.

On August 6, 2013, the album “Greater Than” was released. In 2014, this album earned him two Grammy Awards, including Best Gospel Album.

”And that’s just what he does on his latest album Greater Than, Tribbett’s debut on the Motown Gospel label.”

”It’s more than new music, it’s the start of a movement, and Tribbett is happy to lead the way.”

In a different interview, Tye declared:

”These songs are a reminder to the body of Christ to keep your heads up, and it’s a notice to everyone who is not on this side saying, ‘Hey, why don’t you choose a better side?’ I hope that’s what people walk away with after hearing this record.”

In 2017, Tribbett released “The Bloody Win,” which featured live performances recorded the previous year at The Redemption Center in Greenville, South Carolina.

In 2009, he had an affair with a woman from his choir, Greater Anointing.

Tye said the indiscretion was with a young lady he and his wife had counseled.

Tribbett revealed his transgressions to the Associated Press, saying that he was surprised by his own actions after seeing his father do the same thing. Tye explained:

“I thought it was something that’ll never happen. I saw infidelity with my mom and dad who was a pastor, which made them split.”

”I told myself that I would never do that. So when it happened in my marriage, it was like “Whoa.” God broke down my self-righteousness, my pride.”

He also said that the reason he cheated was:

“I ain’t start getting cute until I started getting money.”

After Shanté learned of his infidelity, she retaliated with an affair of her own with Da T.R.U.T.H., a Christian rapper with the real name Emmanuel Lee Lambert, Jr. – Tye’s then music collaborator and friend.

Though they separated for a time, through counseling, forgiveness, and time, they made it through the storm.

In 2016, Tribbett could have lost his wife in a near-fatal car accident. He revealed:

“Just got a call that my wife was in a car accident. … The car is totaled/Her assistant/rushed to the hospital with head and arm injuries (but we believe will be fine).”

“I just brought her back home without a SCRATCH!”

On Thursday, December 6, 2018, he celebrated the 21 years anniversary with his wife. In an Instagram post, he wrote:

”Today we turn 21!! Our marriage is officially #GROWN. I honestly don’t know what we have NOT gone through….but I am so happy we GOT through!”

Tye Tribbett & Greater Anointing toured and performed with some of the biggest artists in the secular world, such as:

Tye shared that although he agrees that homosexuality may be “natural,” he does not believe it is “God’s best for our lifestyle, according to the Bible.”

READ MORE: What is the net worth of Rachel Levin?

Tribbett earned most of his wealth by selling his albums (for instance, he sold over 1.3 million units across 8 commercially released albums), sponsors, and advertisements on his YouTube channel.

Tribbett owns a home that he purchased for $1.5 million.

Therefore, gospel singer Tye Tribbett has an estimated net worth of $5 million.

READ THIS NEXT: Facts about Getter