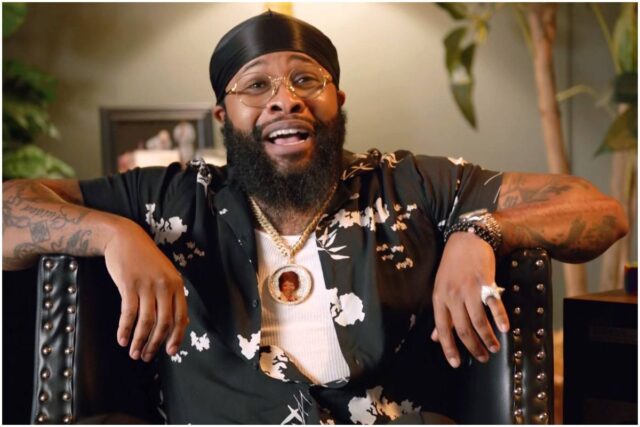 Chico Bean, whose real name is Anthony Jamal Bean, is the stage name of an American producer, singer, writer, actor, and stand-up comedian who is a part of the podcast ’85 South Show’ with cast members Karlous Miller and DC Young Fly.

Bean is also known for starring in The Freestyle Funny Comedy Show alongside B-Daht and Darren Brand. Chico is best known for being a cast member on the improv comedy show Wild ‘N Out.

When Jamal was two, his father was killed on the streets of DC.

Anthony began his career in North Carolina after performing stand-up at universities, colleges, and comedy clubs, as well as opening for comedian Chris Wiles.

In July 2013, Bean became a recurring cast member on Wild ‘N Out, a sketch comedy and improv game show series hosted by Nick Cannon. It runs on MTV, VH1, and MTV2. When asked how it is on the show with Nick Cannon, Chico joked: ”It’s great … to be around somebody who has that much money and doesn’t gonna really share much with you … that’s pretty cool.”

In 2016, Chico performed a song called “Mouth and Lip Service” that appeared on the Wild ‘N Out: Wildstyle Vol. 1.

In 2017, he worked as a writer on the sketch comedy series ”The James Davis Project.”

From 2017 to 2018, Bean appeared as himself in two episodes of the comedy game show Trivial Takedown.

”I hope that there is some beacon of hope to where it could come back the right way, but for us, when we say it’s over, it just feels like it culminated,” Chico said in the podcast whether he would return to the Wild ‘N Out without Cannon. Bean added: ”If Nick isn’t the host, then we ain’t even thinking about going back over there.”

Note – On July 14, 2020, Nick Cannon was fired by ViacomCBS, the MTV parent company, who owns the rights to his show.

”I wanted [it] to be given to me from the O.G. It’s his shit. It’s not corporate shit. Corporate didn’t hire me. Nick hired me,” — responded DC Young Fly on The Breakfast Club, after he was asked whether he’d take the hosting position of Wild ‘N Out. DC Young Fly also said: ”So, it’d be a backstab for me … I wanna be part of a family, and Wild ‘N Out was family.”

At the end of October 2020, Bean, alongside Karlous Miller and DC Young Fly, hosted the BET Hip-Hop Awards.

READ MORE: What is the net worth of Chris Lovasz?

”The only thing stronger than my genes is our Love. HAPPY FATHERS DAY TO ALL THE REAL ONES OUT THERE,” Bean wrote on Instagram in June 2020. Here is a photo of his daughter.

”Fight not to lose my mind from the pain that I did felt.”

”People keep asking why I won’t cut my hair & it’s a few reasons, but the main one is self-awareness.”

Anthony received his nickname “Chico” from his uncle.

Bean earned most of his wealth from his recurring role in the comedy series Wild ‘N Out on MTV. So far, Chico has appeared in 126 episodes of the show.

In 2020, Chico served as the producer of the TV special ”BET Hip-Hop Awards.” In addition, Anthony has performed all over the United States at universities, colleges, and comedy clubs.

Chico also has over 2 million followers on Instagram, where he occasionally publishes paid posts.

Therefore, comedian Chico Bean has an estimated net worth of $4 million.

READ THIS NEXT: Who is Anton Kreil?