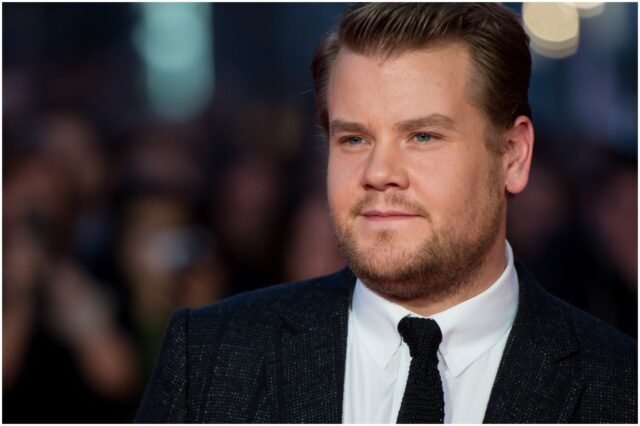 Corden hosts The Late Late Show with James Corden on CBS in the US since 2015.

His mother, Margaret, was a social worker, while his father, Malcolm Corden, worked as a musician in the Royal Air Force Band.

James spent most of his childhood in a village near High Wycombe, called – ”Hazlemere.”

His first stage appearance was in the 1996 musical Martin Guerre.

In 2004, he got his big break in Alan Bennett’s play The History Boys where he was cast as the jokester Timms.

He played Craig Owens in the Doctor Who episode “The Lodger” in June 2010.

In 2009, James performed as Fletch in Lesbian Vampire Killers, a British comedy horror film written by Paul Hupfield and Stewart Williams and directed by Phil Claydon. Later, Corden said about the film:

”’Lesbian Vampire Killers’ was quite embarrassing.”

In March 2010, he took part in the benefits comedy show ”Comedy Gala.”

In 2011, Corden appeared in the action-adventure film The Three Musketeers.

James received the BAFTA Britannia Award for British Artist of the Year in 2015. In the same year, he was appointed Officer of the Order of the British Empire in the New Year Honours.

In 2016, Corden performed as Biggie in Trolls, a computer-animated musical comedy film based on a story by Erica Rivinoja.

He paid the salaries of furloughed employees on the Late Late Show in April 2020.

Carpool Karaoke is a recurring segment on the show in which Corden invites celebrities to travel with him in a car. Some of his famous guests are:

Corden said in an interview:

”It is ridiculous to find yourself in a car singing along with Stevie Wonder.”

In October 2019, he did ”Airpool Karaoke” with Kanye West, reported CNN.

In 2007, Corden started to date Sheridan Smith, an English actress who also appeared in Gavin & Stacey. They broke-up in 2009.

They have three children:

The family moved to the United States in 2014 so James could start his job as the host of The Late Late Show.

In 2017, Corden bought a five-bedroom, eight-bathroom home in Los Angeles for about $10 million from Steve Levitan – the creator of Modern Family who bought the house in 1996 for $1.55 million. James also has a home in Belsize Park, London.

”I don’t care about awards and all the attention being a celebrity gets you.”

”My major ambition is just to stay relevant.”

”I don’t consider myself to be incredibly confident, or really lacking in confidence.”

His comedy influences are:

His favorite comedian is Anna Wintour.

In 2020, USA Today reported that Corden had a minor eye surgery that was performed while he was awake. The surgery was required after he sustained an eye injury in 2012.

He is a West Ham United supporter.

Corden earned most of his wealth from performing in over 76 movies and television series, including – Gavin & Stacey, Fat Friends, The Wrong Mans, The Prom, Doctor Who, Peter Rabbit 2: The Runaway (voice), and Heroes and Villains.

”He is a host and performer whose considerable talents shine on every stage,” said David Nevins, Chief Creative Officer for the CBS Corporation.

His Carpool Karaoke segment on the show was a key factor for his bumper pay deal.

Therefore, English television host James Corden has an estimated net worth of $60 million.

READ THIS NEXT: Brock O’Hurn Net Worth