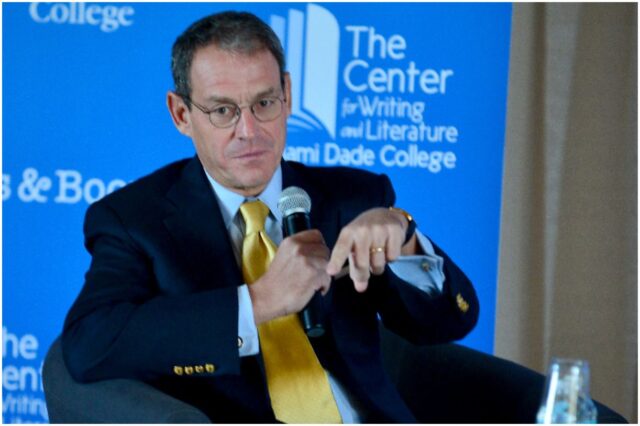 Daniel Silva is a best-selling American author of 21 espionage and thriller novels.

The main focus in his novels is Gabriel Allon, an Israeli art restorer, assassin, and spy, who is a key figure in all but 4 of Daniel’s titles.

His books have been translated into over 30 languages and are published around the world.

His parents are both Portuguese American teachers.

His family moved to Merced, California, when he was 7 years old.

He earned a BA from California State University, Fresno.

Daniel began his writing career in 1984 as a journalist with a position at United Press International.

He also worked as an executive producer for a few of CNN’s television programs.

In 1996, Silva published his first novel, – ”The Unlikely Spy.” The novel is based on the real-life attempt by the Allies to use British intelligence to cover up the true plans for D-Day.

In 1998, Daniel published the spy fiction novel, The Mark of the Assassin.

In the follow-up year, he released ”The Marching Season.” It is the sequel to The Mark of the Assassin.

In 2000, he published ”The Kill Artist.” It is the first book featuring Gabriel Allon.

In 2004, Daniel published a spy novel called ”A Death in Vienna.”

In 2005, he released ”The Prince of Fire.” Some of its characters are based on real people, like Black September leader Ali Hassan Salameh. The book spent 4 weeks as a NY Times Bestseller.

In 2006, ”The Messenger” was released. The novel was the winner of the 2007 Barry Award for Best Thriller. In addition, it spent 6 weeks as a NY Times Bestseller.

In 2007, Silva released ”The Secret Servant.” The book spent 6 weeks as a NY Times Bestseller.

In 2008, ”Moscow Rules” was published. The villain in the novel is a rich Russian oligarch who is a weapons dealer.

In the same year, he released the spy novel ”The Defector.” The cover of the book depicts Big Ben and the Houses of Parliament in London.

In 2010, Silva released ”The Rembrandt Affair.” The book focuses on Gabriel Allon and his team, who seek a lost Rembrandt.

In 2011, the novel ”Portrait of a Spy” was published. In the next year, he released ”The Fallen Angel.”

In 2013, he received the Barry Award for Best Thriller for The Fallen Angel. Later that year, he released ”The English Girl.” The novel reached the top of the NY Times bestseller list.

In 2014, Daniel released the spy novel ”The Heist.” The book focuses on the recovery of stolen artwork.

On May 15, 2017, Daniel announced that MGM had acquired the adaption rights for his Allon series.

During an interview, Silva said:

“I am excited to be working with the talented team at MGM, led by Gary Barber, the home of James Bond, ‘Fargo’ and ‘The Handmaid’s Tale.’”

Daniel went on to say:

“For the fans of Gabriel Allon, I thank you for your patience. I always said I would wait for the right time and the right partner.”

In 2017, he released the spy novel ”House of Spies.” It debuted on the NY Times Bestseller list at #1.

In 2018, Daniel published ”The Other Woman.” It is the 18th Gabriel Allon series.

Daniel Silva is married to Jamie Gangel, a CNN special correspondent. Later, Daniel converted from Catholicism to Judaism, the religion of Gangel.

The two met while they were correspondents in the Middle East.

The couple has two children, Nicholas and Lily.

”I have plenty of ideas; plenty of topics lined up that I want to write about.”

”My favorite books are 1984 and The Great Gatsby. I love Graham Greene.”

”Most spies betray their countries and their services for money.”

”I’m very grateful to my readers, and I don’t want to disappoint them.”

”People in the art world and the restoration community are very fond of the books.”

”I think that 9/11 changed everyone’s approach to this type of fiction.”

”Plots generally flow from what is going on in the world at the time I am writing.”

”I am a student of Russian and Soviet history, and I love writing about this new cold war in which we find ourselves.”

”The idea behind my books is to escape, and to write now about that sort of thing would not be escapism.”

READ MORE: Who is Darcizzle Offshore?

Silva was raised as a Catholic.

When asked by EW about his favorite book as a child, he responded:

”My absolute favorite books as a child were Make Way for Ducklings by Robert McCloskey and Maurice Sendak’s Where the Wild Things Are.”

”My signed copy of Wild Things is one of my most treasured possessions.”

Silva earned most of his wealth from writing 21 spy novels. Some of the books are – The English Spy, The Unlikely Spy, The Heist, The Mark of the Assassin, The English Girl, The Marching Season, The Fallen Angel, The Kill Artist, Portrait of a Spy, The English Assassin, The Rembrandt Affair, The Confessor, The Defector, Moscow Rules, The Secret Servant, The Messenger, Prince of Fire, and A Death in Vienna.

Therefore, American author Daniel Silva has an estimated net worth of $5 million.

READ THIS NEXT: Who is Leslie Benzies?