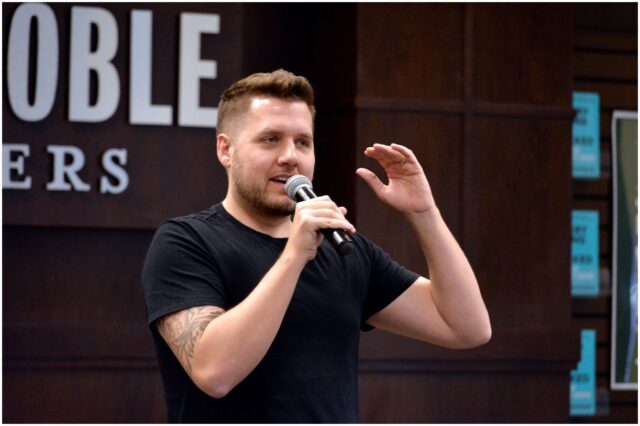 Mark Manson is an American writer and blogger who is best known for his bestselling books ”The Subtle Art of Not Giving a F*ck” and ”Models: Attract Women Through Honesty.”

As an internet entrepreneur, Mark is the owner of markmanson.net – one of the largest independent personal growth websites in the world.

In 2007, Mark graduated from Boston University with a degree in finance.

Currently, he owns MarkManson.net, a website that has over 2 million monthly readers.

On his blog, Mark writes about topics related to modern American culture, psychology, life choices, relationships, and dating. He once said:

“What I really, really love is writing. If I can just write and make a really nice living out of that, why would I change that?”

Some of his popular articles are:

The book details how a man can attract women without emulating others, without lying, and without faking behavior.

On September 13, 2016, Mark released his second book, named – ”The Subtle Art of Not Giving a F*ck: A Counterintuitive Approach to Living a Good Life.”

In the book, the author recommends us to get to embrace our uncertainties, faults, and fears. In addition, Mark says to start confronting painful truths.

During an interview, Manson said about the book:

“If other self-help books tell you ‘just say yes,’ I’m going to write a chapter that says, ‘just say no.’”

On May 14, 2019, he published ”Everything Is F*cked: A Book About Hope.” In this book, Mark writes about the endless calamities taking place in the world around us.

He said to Nomadic Matt about the book:

“I’ve been calling it an “expansion” of the ideas from Subtle Art.”

“I think it’s a deeper analysis and more complex application of the same concepts—values, pain/suffering, and our definitions of success.”

Manson is the founder and CEO of Infinity Squared Media.

He said for Forbes:

“Even though I’m a writer, I’ve always viewed my work much in the same way as a startup or marketer might view their work.”

In 2016, Mark Manson got married to Fernanda Neute.

”Everybody wants to have great sex and an awesome relationship — but not everyone is willing to go through the tough communication.”

”Each book brings its own generational edge to the same fundamental idea.”

”People tend to rely too much on self-discipline and eschew forming useful habits.”

”Some people have an incredibly high IQ but low EQ.”

”The only thing that changes is the meaning we construct around our suffering.”

”Everyone wants to live a care-free, happy and easy life, to fall in love and have amazing sex and relationships.”

”I definitely consume way less media these days. I am less active on social media.”

”People typically struggle with boundaries because they find it difficult to hurt someone else’s feelings.”

”Everything includes some sort of cost. Nothing is pleasurable or uplifting all of the time.”

His writing has appeared in:

READ MORE: Who is Darcizzle Offshore?

Manson earned most of his wealth from selling his books. For instance, the book – ”The Subtle Art of Not Giving a F*ck” sold more than 6 million copies, according to Men’s Health. This book costs about $14 on Amazon.

In total, his books have sold more than 9 million copies worldwide and have been translated into over 50 languages.

Moreover, Mark has a blog with over 2 million monthly page views. His blog doesn’t have ads but sells a premium subscription for $48 per year. The paid membership features premium articles and several full-length courses.

Manson has several free e-books, including – What the Hell Are You Doing with Your Life? and Get Your Shit Together — Here’s How.

Therefore, blogger Mark Manson has an estimated net worth of $7 million.

READ THIS NEXT: Buffie the Body Net Worth