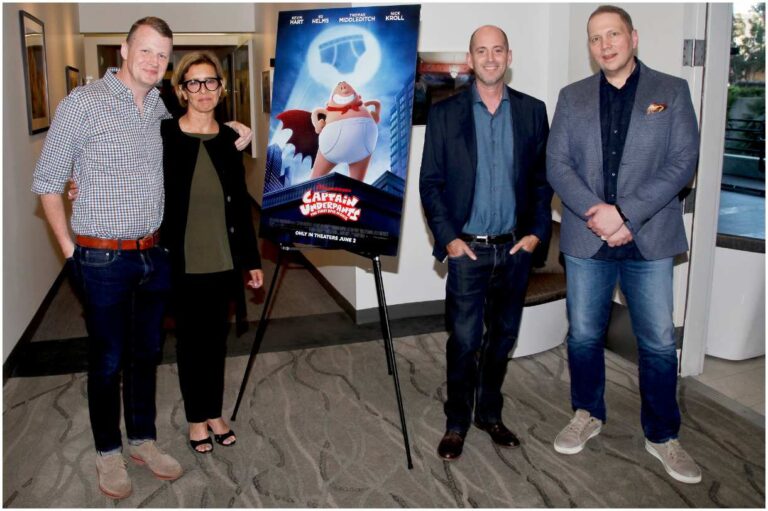 Pilkey won a Caldecott Honor for his picture book – ”The Paperboy.”

His mother (Barbara) was the organist at a local church, while his father (David, Sr.) was a steel salesman.

Dav has one sibling, an older sister named Cindy.

Pilkey was diagnosed with ADHD and dyslexia.

During an interview, he said about his childhood:

“I don’t remember much about my early childhood, except that I was almost always happy.”

”Life was pretty cool when I was little…and then school started.”

”I got inspired to create children’s books from a teacher I had at Kent State University.”

Pilkey worked at Pizza Hut for a while, where they left the “e” in Dave off his nametag. Dav chose to use that spelling as his pen name.

In 1987, he entered his first book, titled – ”World War Won,” in a national competition for student authors. He won in his age category. Part of the prize was having his book published.

The Adventures of Captain Underpants

On September 1, 1997, he published – ”The Adventures of Captain Underpants,” an American children’s novel.

The book became a hit with children across the US. In addition, it has been translated into over 25 languages.

”The Adventures of Captain Underpants” stars mischievous 4th graders Harold Hutchins and George Beard, who turn their principal into an underwear-sporting superhero.

Other books in the series include the following:

The series has sold more than 80 million copies.

He took a break from writing for several years to care for his terminally ill father.

In March 2010, Dav signed a deal with Scholastic in order to come out with 4 books:

During an interview, he said about his books:

”Although my books have been deemed “anti-authoritarian” and “inappropriate” by some, I’ve heard from parents, teachers, and kids alike that they’ve helped turn non-readers into readers.”

In 2005, Dav Pilkey married Sayuri Pilkey, a professional musician and the owner of Pilkey’s favorite Japanese restaurant. They divorced in 2007.

The couple has no children of their own. During an interview, he confessed:

“I fell in love and got married when I was 40 and my wife is the same age as me, and we were just too late. We just missed the boat!”

”Once I have the story in my head, I write it down. The illustrations usually come last.”

”Grown-ups do a lot of complaining!”

”Superheroes, especially for young kids, are pretty appealing. They can change the world. They can do anything.”

”My books are just pure escapism for kids.”

”I had a lot of reading problems growing up.”

He has won many awards including:

In elementary school in Elyria, Ohio, Pilkey was diagnosed as suffering from dyslexia and ADHD.

Pilkey earns most of his wealth from publishing the book he writes. Dav is best known as the author of the Captain Underpants book series, which has sold 80 million copies worldwide. DreamWorks released the first Captain Underpants animated feature film in 2017.

In addition, Dav works as an illustrator. He illustrated the following books – Julius (1993), The Place Nobody Stopped (1991), and Don’t Pop Your Cork on Mondays (1988), Therefore, Dav Pilkey has an estimated net worth of $3.7 million.