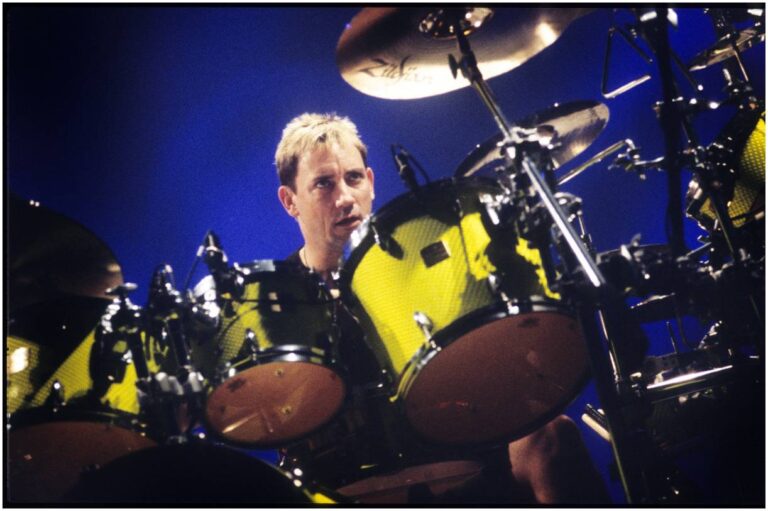 Jimmy Chamberlin (birth name – James Joseph Chamberlin) is an American record producer and drummer from the band The Smashing Pumpkins.

Rolling Stone ranked Chamberlin 53 on its list of 100 Greatest Drummers Of All Time in 2016.

His older brother Paul played drums in a jazz band and his father played the clarinet. Chamberlin said for Louder Sound about his father:

“My dad was a clarinet player so we listened to a lot of big band music in the house.”

Jimmy went on to say:

”My dad was a big fan of Gene Krupa, Cozy Cole, Sonny Greer, Papa Jo, and those guys.”

At age 9, Chamberlin started drumming after he was inspired by jazz trumpeter and composer Miles Davis.

He took lessons under the tutelage of Charlie Adams, an American drummer who is best known for playing in Yanni’s touring band. Jimmy once said:

”When I was 9, I started taking lessons from Charlie Adams, who plays drums for Yanni now.”

”He’s an excellent player who’s very much into rudimental playing and I went through a few technique books with him.”

In a different interview, Jimmy confessed about the drum lessons he took:

”From a technical standpoint, [drum lessons] laid a great standpoint before I could articulate what I wanted to articulate later on.”

He also studied under a few other teachers, learning Brazilian, Latin, and big band technique.

On July 27, 1993, The Smashing Pumpkins released their 2nd album on Virgin Records. Later, Rolling Stone magazine ranked the album number 362 on their 500 Greatest Albums of All Time list.

On October 23, 1995, the rock band released another album, called – ”Mellon Collie and the Infinite Sadness.”

“Bullet with Butterfly Wings” was the lead single and it debuted at number 1 on the US Billboard 200.

In 1996, Chamberlin was fired from The Smashing Pumpkins after the overdose death of keyboardist Jonathan Melvoin. Jimmy was also arrested for drug possession.

The rest of the rock band members stated:

“It has nearly destroyed everything we are and stand for. We have decided to carry on without him, and we wish him the best that we have to offer.”

In 1996, Jimmy collaborated with Jimmy Flemion, Kelley Deal, and Sebastian Bach, in a project called the Last Hard Men.

In 2001, Chamberlin and Billy Corgan formed Zwan, an alternative rock supergroup. They produced just one album, titled – ”Mary Star of the Sea.”

In 2005, he released an album, titled – ”Life Begins Again” under the name of Jimmy Chamberlin Complex.

In 2005, Jimmy re-joined The Smashing Pumpkins. In March 2009, he left the rock band. The album has a few guest vocalists and musicians – Rob Dickinson, Bill Medley, and Billy Corgan.

In 2013, he joined Frank Catalano (a jazz saxophonist) for several live performances in the Chicago area.

In 2015, Jimmy re-joined The Smashing Pumpkins for a summer tour.

In February 2018, he officially re-joined The Smashing Pumpkins. In November 2018, the band released the album ”Shiny and Oh So Bright, Vol. 1 / LP: No Past. No Future. No Sun.”

”I’m a firm believer in raising your kids on your own, not having nannies and that type of stuff.”

”I think the ’90s was an important generation of music.”

”I don’t muffle anything. I am not into muffling drums.”

”Charlie Watts is one of the most recognizable drummers out there and he does it with very few brush-strokes.”

”I never had access to MTV growing up because our TV only had four channels.”

”Sometimes compromise is the only way through the door.”

”Self-expression is the foundation of human existence.”

He doesn’t drink anymore on the shows. In his words:

”I drink lots of water. No alcohol. When I was young I used to drink at shows, and I was always dehydrated.”

In an interview for AZ Central, he said:

His favorite car is a 2000 Toyota Land Cruiser. He said for Motor Trend:

”My friend who was a devout Toyota guy was like, ‘Buy this car, and you’ll never have to buy another truck.’”

Jimmy went on to say:

When asked by Gothamist about the differences between New York’s music and Chicago’s, he responded:

”I don’t think there’s much of a difference other than sheer numbers.”

”Chicago has an East Coast vibe as far as people willing to make a commitment. Something we don’t have in L.A.”

Chamberlin earned most of his wealth from his music. In 2008, Gigwise named Jimmy the 5th best drummer of all time. His most profitable band is The Smashing Pumpkins.

In addition, Jimmy made some money from investments. In 2013, he became Chief Executive Officer of a company that has since partnered with Umphrey’s McGee, Budweiser’s Made In America Festival, C3, Phish, Vans, AEG, Live Nation, YouTube, and Yahoo. Therefore, Jimmy Chamberlin has an estimated net worth of $8.5 million.