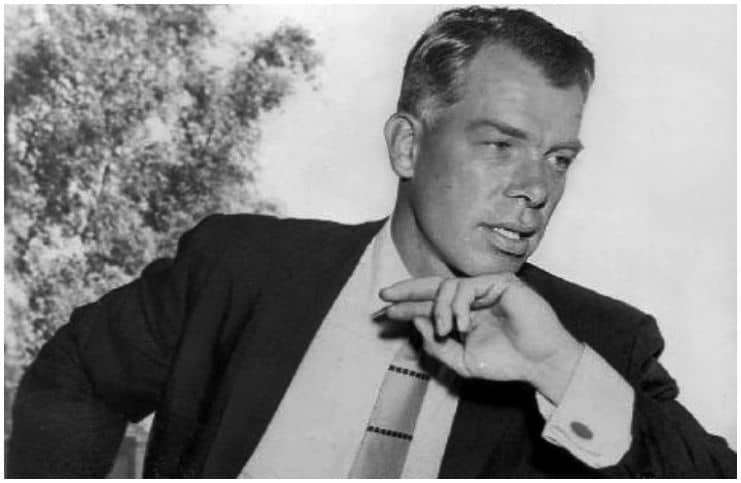 Lee Marvin was an American television and film actor best known for his prematurely white hair and distinctive voice.

He initially appeared in supporting roles, mostly soldiers, villains, and other hardboiled characters.

He was born in New York City. Marvin was the son of two working professionals, Courtenay Washington, a well-respected beauty and fashion writer/editor, and Lamont Waltman Marvin, an advertising executive and later the head of the New England and New York Apple Institute.

His father was a direct descendant of Matthew Marvin Sr. (1600 – 1678), a founding settler of Hartford and Norwalk, Connecticut. 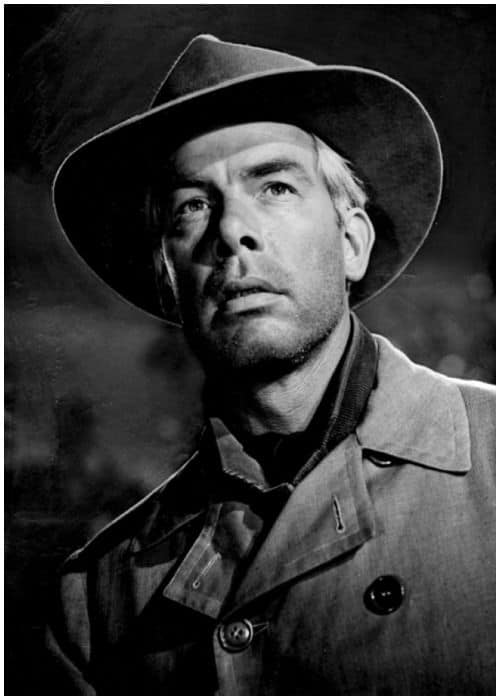 During the late 1930s, Lee attended Manumit School, a Christian socialist boarding school in Pawling, New York. After, Marvin attended a Catholic school in St. Leo, Florida, after being expelled from a few other schools for bad behavior.

As a teenager, he spent weekends and spare time hunting puma, deer, bobwhite, and wild turkey, in the wilds of the then-uncharted Everglades. When he was young, Lee also studied the violin.

At age 18, he left school to enlist in the US Marine Corps Reserve. Marvin served with the Fourth Marine Division in the Pacific Theater during WWII.

On June 18, 1944, while serving as a member of “I” Company, 3rd Battalion, 24th Marines, 4th Marine Division, Marvin was wounded in action, during the assault on Mount Tapochau (the highest point on the island of Saipan in the Northern Mariana Islands) in the Battle of Saipan.

Lee was hit by machine-gun fire, that severed his sciatic nerve (a large nerve that runs from the lower back down the back of each leg). In addition, he was hit in the foot by a sniper.

In 1945, after over 12 months of medical treatment in naval hospitals, he was given a medical discharge with the rank of the private first class.

After World War II, while working as a plumber’s assistant at a local community theatre in upstate New York, he was asked to replace an actor who had fallen ill during rehearsals.

Marvin said that he learned to act in the Marines during WWII, trying to act unafraid during ferocious combat, which brought him a Purple Heart during the invasion of Saipan.

His film debut was in ”You’re in the Navy Now” (1951), which was directed by Henry Hathaway, a film that also marked the debuts of Jack Warden and Charles Bronson.

In February 1951, Lee made it to Broadway with a small role in a production of ”Uniform of Flesh.”

In 1956, he was the villain in ”7 Men from Now” with Randolph Scott (an American film actor whose career spanned the years from 1928 to 1962). The movie was directed by Boetticher.

In 1970, he turned down the lead role of Gen. George S. Patton in ”Patton” since he did not want to glorify war.

He was Steven Spielberg’s first choice to play Quint in ”Jaws” (1975). However, Lee declined the role, saying:

“What would I tell my fishing friends who’d see me come off a hero against a dummy shark?”

His last big role was in Samuel Fuller’s The Big Red One (1980), a film based on Fuller’s own war experiences.

His final appearance was in The Delta Force (1986) with Chuck Norris.

In December 1986, he was hospitalized for more than 14 days due to a condition related to coccidioidomycosis (an infection caused by the fungus Coccidioides).

At some point, Lee went into respiratory distress.

On August 29, 1987, he died of a heart attack, at age 63. Marvin was buried with full military honors at Arlington National Cemetery.

In February 1951, he married Betty Ebeling. The couple had four children (a son and 3 daughters). The couple divorced in 1967.

According to Ebeling’s memoirs – “Tales Of a Hollywood Housewife,” Lee was often pulled over by police for drunken driving, however, he got away with signing an autograph for the officers.

In October 1970, Lee married Pamela Feeley. The couple had no children together, but they were married until his death.

Lee had a decent role in a feature with Eight Iron Men (1952), a war film produced by Stanley Kramer.

When asked if Paul Newman seems to be dumb or smart, he responded:

For portraying both criminal Tim Strawn and gunfighter Kid Shelleen, Marvin won the Academy Award for Best Actor, along with a Golden Globe Award, a BAFTA Award, and the Silver Bear for Best Actor.

Marvin was a direct descendant of Thomas Jefferson (the third president of the United States from 1801 to 1809) and twice a descendant of male-line relatives of George Washington.

He guest-starred on episodes of Fireside Theatre, Suspense, and Rebound.

His military awards include:

Marvin earned most of his wealth by appearing in movies. In the last 15 years of his career, he was getting paid one million dollars per film. He even said: ”Newman has it all worked out. I get a million. He gets a million, too.” However, he was a big spender. Therefore, calculating the current inflation, Lee Marvin had an estimated net worth of $11.5 million.

READ THIS NEXT: Who is David Joyner?