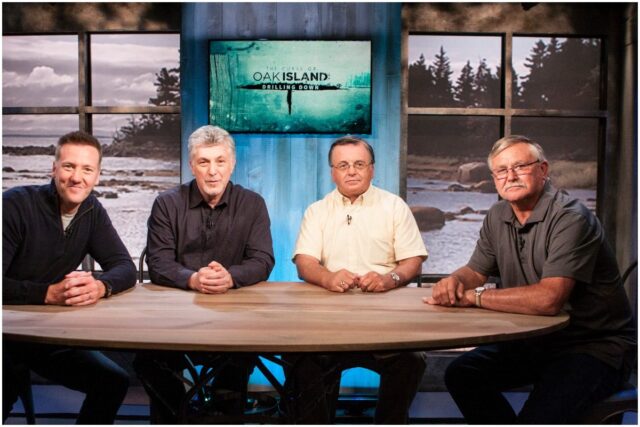 Rick and Marty Lagina are recognizable to all would-be treasure hunters thanks to 6 years—and counting—on the History Channel’s The Curse of Oak Island.

The show, which follows this dynamic duo around Oak Island as they dig for literal buried treasure and listen to amateur and expert theories, has made these Michigan natives a household name.

The show—and its two main stars—show no signs of slowing down any time soon. Keep reading to learn everything we know about older brother Rick and his journey from postal worker to treasure hunter.

Rick Lagina was born in Kingsford, Michigan, on January 25th, 1952.

All his siblings went to the same high school, and they all still live in the Michigan area today.

Rick has never been married, and he doesn’t have children.

He is an avid family man, spending a lot of time with his siblings and their kids, and he’s been vocal about having more family join the treasure hunting team.

A Discovery Is Made

When Rick was 13, he picked up an issue of Reader’s Digest.

Fortuitously, it was the January 1965 issue, which was about the treasure of Oak Island. In the article, Rick learned about the legend of the treasure buried there.

He was hooked. Eventually, he managed to convince his brother to share his interest. Even their dad kept articles about Oak Island, including one in the Wall Street Journal.

As the boys grew older, Rick’s obsession with Oak Island—and the mysteries hidden there—grew, too.

After graduating from high school, Rick worked many jobs. He was mechanically minded and practical, and enjoyed physical work. Eventually, he joined the US postal service.

He retired from USPS in the early 2000s, when he and his younger brother Marty made the big move to purchase a controlling share in the island that had long fascinated them.

In the beginning, the brothers started a tour company on the island, which allowed guests to visit and tour legendary spots like:

The business also houses a small museum for those interested in the history and mystery of the island.

Marty Lagina—Rick’s younger brother and the more skeptical of the pair—put up the majority of the funding for the Oak Island venture. What Rick offered in spades was passion, dedication, and commitment to finding whatever was hidden out there.

The island, which is 57 hectares off the south shore of Nova Scotia, Canada, wasn’t ready to give up all its secrets, though.

As Rick and various family and friends—including nephew Alex—toiled away to discover what the small island was hiding under the surface, fame came knocking.

After learning that the brothers had a majority ownership of the island, Prometheus Entertainment—the media company behind The History Channel—came calling.

The company had a concept for a reality show, due to the interest viewers had in shows like Discovery’s Gold Rush and NBC’s Treasure Hunters.

After some discussion, the brothers agreed—and The Curse of Oak Island was born.

The series tracks the brothers and their team as they hunt for historical artefacts and hidden treasure on the island.

It also showcases various theories about the nature of the treasure buried on the island, and interviews independent researchers about their own views.

Dan Blankenship drilled Borehole 10-X and explored the deepest shaft on the island. He joined the show when he was 90, and was a regular cast member until his death in 2019.

The series also touches on the history of the island, recent discoveries the guys—and previous explorers—have made, and failed attempts at getting into areas like The Money Pit and Borehole 10-X.

The show was a major success when it premiered in Canada on January 5th, 2014. So much so that it was signed for another season…and then another, and another.

To date, there have been 8 seasons of the History Channel hit.

Note – Craig Tester is a producer for the show.

Rick earned most of his wealth from appearing in the History Channel reality TV series The Curse of Oak Island.

”One of the most gratifying aspects of being a part of this show is when parents come up and say to one of us, ‘We watch this as a family,’” Rick told My North.

Want to learn more about Rick’s life’s work? You can watch The Curse of Oak Island here

READ THIS NEXT: Who is Mama Natural?