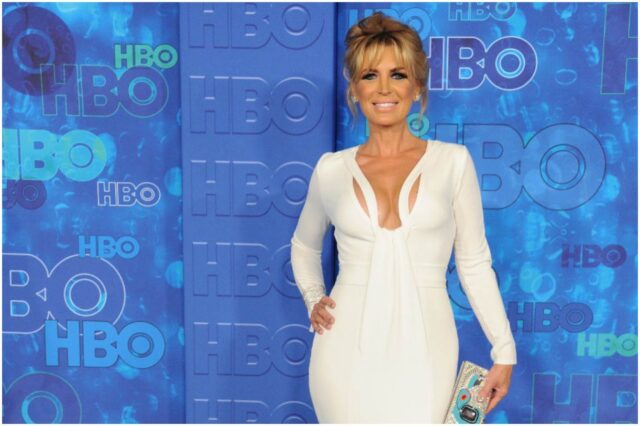 What is Sandra Vidal’s net worth?

Sandra Vidal is an Argentinian soap opera actress who landed the lead role in the 2003 film White Rush.

But, Vidal is best known for her role as Sofia Alonso in the soap opera ”The Bold and the Beautiful.”

Soon after, she signed a modeling contract with Rochas Perfume. She moved to Paris and was one of the top models on the European circuit. Sandra also traveled to Milan and Madrid.

The Bold and the Beautiful

The serial has won 31 Daytime Emmy Awards, including 3 for the “Outstanding Drama Series.” B&B was created by Lee Phillip Bell and William J. Bell for CBS.

In 1987, Sandra came into the limelight after portraying Sofia Alonso in the B&B.

In 2002, her performance in ”The Bold and the Beautiful” earned her a nomination for the ALMA Award for Outstanding Actress in a Daytime Soap Opera.

After, she went on to host her own show Hacerte Cargo.

”Rica, Famosa, Latina” is an Estrella TV reality series that was co-created by Joyce Giraud and Lenard Liberman. Currently, there are five seasons completed.

Cast members in the first season of ”Rica, Famosa, Latina”:

Victoria Del Rosal was featured in the most episodes of ”Rica, Famosa, Latina” – 106. Sandra featured in 72.

In 2016, Vidal was hurt after a planned catfight with Victoria del Rosal spiraled horrifically out of control during filming. After the pair came face-to-face, they started attacking one another.

Vidal has been rushed to the hospital after being stabbed in the chest. According to reports, she also had a bloodied face and a swelling to her head.

According to officers, neither of them was charged.

Sandra Vidal was in a relationship with Pablo Montero, a Mexican actor and pop singer who is known for appearing in films like Rebecca as well as for his albums like 2000’s Pablo Montero.

In 2001, Pablo joined other artists invited to the White House South Lawn for a Cinco de Mayo fiesta. As a member of the pop group Trebol, Montero was a teen idol in Mexico.

The romance between Vidal and Montero began in 2006.

In 2011, Montero got married to Carolina Van Wielink.

Sandra and Montero have a son, named Pablo.

During her appearances at ”Rica, Famosa, Latina,” viewers could see her struggles by working full-time as a realtor in the Los Angeles area and raising her son as a single mother.

“I think that people that are in the public eye have a responsibility so other people can see themselves reflected in our lives and to not feel alone.”

“I am a public figure, it is the price we have to pay.”

READ MORE: Who is Zack Hample?

Vidal had a role in National Lampoon’s Cattle Call, which featured Diedrich Bader, an American actor who is known for appearing in the following films:

Sandra was a host at the Univision Latin Grammy Awards.

She began studying acting with the following Argentine directors:

Vidal earned most of her wealth from working as an actress and a model. She rose to fame after portraying Sofia Alonso in ”The Bold and the Beautiful.” Sandra also performed in CSI: NY and Cattle Call.

Therefore, Argentinean actress Sandra Vidal has an estimated net worth of $1 million.

READ THIS NEXT: Who is Jimmy DiResta’s wife?