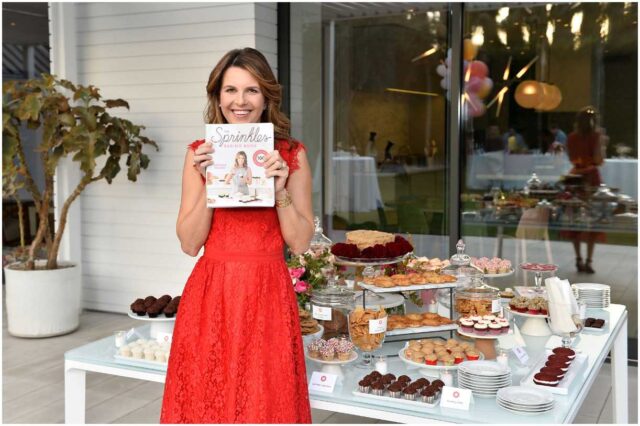 Candace Nelson is a culinary judge and pastry chef who starred in Throwdown and Cupcake Wars.

Nelson also authors a food column for the Charleston Gazette-Mail and writes about Appalachian food culture on her blog candacelately.com.

Candace was raised in Indonesia, where she often went without electricity and had to boil water for drinking. She said:

”My family lived overseas for a lot of my young life. And I was living in Medan, Sumatra, of all places.”

”I started baking with my mom probably when I was five or six.”

”Really simple things at first like chocolate chip cookies and brownies – things that clearly I liked to eat and that were easy enough to mix up by hand.”

She moved to the United States for high school. In 1996, she graduated from Wesleyan University with an economics degree.

Nelson worked as an investment banker. She said:

”I was recruited out of college into the financial analyst program at Alex Brown corporate finance, working with high tech companies.”

In 2005, she opened her famous store, Sprinkles Cupcakes, in Beverly Hills, California. Candace started in a 600-square-foot (56 m2)-shop. She said:

”My husband and I did a lot of research and development prior to opening Sprinkles. The recipes alone took me two years to perfect!”

”Sprinkles Cupcakes” was an instant success within the first few days of opening. For instance, the shop sold over 2,000 cupcakes during the first week.

During an interview, Nelson said:

”We sold out on the first day, we were the talk of all of Hollywood, and then eight months in we were on the Oprah Winfrey show.”

She has racked up celebrity endorsements from the likes of:

About eight months into their first year, Oprah once ordered 300 cupcakes for overnight delivery to her studio audience.

Currently, the shop is replicating its successful formula nationwide with bakeries in:

It is an American television competition series that premiered on the cable television network Food Network on December 27, 2009.

The show gathers the USA’s best cupcake bakers against each other as they cook for the opportunity to showcase their cupcakes at a celeb-studded event and the sweet prize of $10,000.

In 2010, Nelson was offered a position as a judge in the ”Cupcake Wars.”

She has been a judge on the show named – ”Throwdown! with Bobby Flay,” which is part of the Food Network television program.

In Throwdown! with Bobby Flay, celebrity chef Bobby Flay challenges cooks renowned for a type of cooking or a specific dish to a cook-off of their signature dish.

It is an American cooking reality web television series that was released on July 13, 2018, on Netflix.

Sugar Rush is hosted by Hunter March and judged by professional chefs Adriano Zumbo and Candace Nelson. She said:

”I have a new Netflix show that premiered in July called Sugar Rush.”

The dough is made by hand and then fermented and proofed for 48 hours.

She has a podcast named – ”Live To Eat.”

She and Charles met in the 1990s at a boutique in San Francisco and eventually got married.

During an interview, Candace said about her husband:

”My husband Charles has always been my partner in business.”

”Many people can’t believe I work harmoniously with my husband, but we trust each other and love what we do. We both have different roles in the company, so it works!”

She has two children. She said:

”As soon as I wake up, I drink an entire glass of water for hydration.”

”And then a mug of coffee with almond milk in an attempt to bring my energy levels up to those of my 10-year-old and seven-year-old boys.”

”You need passion to fuel your business and experience to perfect it.”

”Do your research. Hire the best people you can. Make sure you have the good people working with you, and around you, and for you, and train them well.”

”It’s funny because when we opened our first location, it was the height of the low-carb craze, and the South Beach Diet was the number one bestseller.”

During the 1930s, her grandmother made desserts at a San Francisco restaurant.

”Sprinkles Cupcakes” was designed by an architect from Vienna.

Her cupcakes have been featured in famous shows and magazines such as:

Nelson earned most of her wealth from founding Sprinkles Cupcakes.

She also founded Pizzana. In addition, Nelson is on a jury in several television shows.

Nelson is the author of The Sprinkles Baking Book, The West Virginia Pepperoni Roll, and Sweet Success.

Therefore, Indonesian-born pastry chef Candace Nelson has an estimated net worth of $5 million.

READ THIS NEXT: Sean Stephenson Net Worth