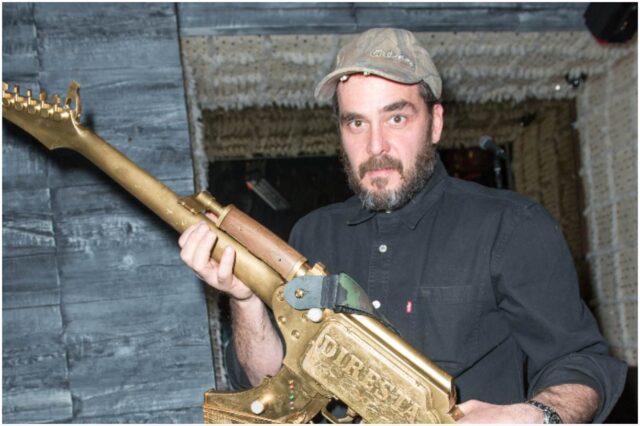 Jimmy DiResta is an American artist and craftsman who takes ordinary objects/materials and creates exceptional works using a variety of techniques and tools.

Moreover, DiResta is the co-host of the podcast Making It and the creator of a popular self-titled YouTube channel. He also hosted a variety of television shows, including Hammered with John & Jimmy DiResta, Against the Grain, and Dirty Money.

Jimmy graduated from the School of Visual Arts in Manhattan, NY, in 1990 with a BFA degree.

In 1993, DiResta formed the toy design company and store DiResta in the East Village.

In the same year, Jimmy went on to teach at the School of Visual Arts.

In 2003, DiResta appeared on Fox Television in a show called Trash to Cash. DiResta was co-host alongside his brother, John DiResta, as well as he acted as a set decorator. During the show, John acted as the comic relief, while Jimmy would build whatever was needed.

Also, the brothers went around finding or buying cheap garbage. The show lasted for only one season.

Note – John DiResta is an American former New York Transit police officer turned actor, fry cook, and comedian, who has appeared in a few films, including on the CBS sitcom ”Rules of Engagement” as well as on ”Miss Congeniality” and ”Miss Congeniality 2: Armed and Fabulous.”

In 2009, DiResta hosted “Against the Grain” on the DIY Network, an American pay television network owned by Discovery.

In 2011, Jimmy co-hosted Dirty Money with his brother. The show was produced by V2 Films and aired on the Discovery Channel. During this show, they set out scouring every corner of NYC, from flea markets to dumpsters.

On March 10, 2006, he created his self-titled YouTube channel, which surpassed the 1.95 million subscribers mark in March 2021. The channel has over 380million views.

He wrote on the channel description:

”DON’T DO THE DANGEROUS THINGS I DO.”

He has co-authored a book titled – ” Workshop Mastery with Jimmy DiResta: A Guide to Working With Metal, Wood, Plastic, and Leather.”

Projects in this book include:

He co-hosts a podcast called – ”The Making It Podcast.”

It is a weekly audio podcast that is hosted by three different makers with completely different backgrounds talking about making things with your bare hands as well as design and creativity.

In 2022, DiResta appeared in eight episodes of the TV series – “Making Fun.”

Jimmy DiResta is married to Taylor Forrest, a creator of homewares and furniture.

”I had a really hard time with math. I actually cheated to get out of my state regents exam.”

”My goal is to educate, entertain and inspire.”

”I always say it and people who listen to me a lot probably going to get bored by the things I repeat.”

”My dad and I used to hang out with him and help him carry wood and stuff, and occasionally he would let me try and hammer a nail when I was little.”

READ MORE: What is the net worth of Kehinde Wiley?

He has the nickname “Jimmy Two Shows” as both his show and podcast share a name.

In 2017, Jimmy traveled to California to be a part of NBC’s Making It as an on-camera helper. “Making It” is an American reality competition series that is hosted by Nick Offerman and Amy Poehler.

Nicholas Offerman is an American carpenter, comedian, writer, and actor who received a Critics’ Choice Television Award nomination for Best Supporting Actor in a Movie/Miniseries. He is known for his role in The Founder, in which he portrays one of the brothers who developed the fast-food chain McDonald’s.

Jimmy has made a big name for himself with his amazing workshop and inventiveness skills, creating numerous projects for television shows and YouTube videos like – Trash to Cash on Fox Television and ”Hammered and Against the Grain” on the DIY Network.

He has over 380 million views on YouTube, which means about $1 million in revenue before taxes. Also, he receives around $1,700 per month from Patreon.

Therefore, Jimmy DiResta has an estimated net worth of about $3.5 million.

READ THIS NEXT: Amanda Salinas Net Worth