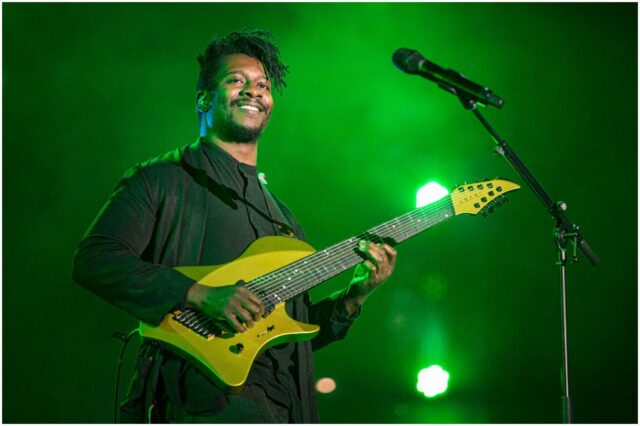 He was born on January 7, 1983, in Washington, D.C., the USA to Nigerian immigrants. He said about his parents:

“They came in the late ’70s for the same reason everyone else does: the opportunity and chance to actually make a life for yourself based on how hard you want to work.”

Abasi first picked up a guitar at his friend’s house, simply strumming it and making up basic licks on the spot.

“When I was going to the Atlanta Institute of Music, I worked at a dog kennel. It was a boarding facility, and I was cleaning up dog poo in a concrete room with 40 dogs barking at me at the top of their lungs.”

Abasi went on to say:

”I also worked at a fish cannery in Alaska, where I processed salmon for, like, 16 hours a day.”

”That’s actually how I saved up to buy my Steve Vai guitar. I’ve worked in coffee shops. I’ve done a lot of odd jobs.”

Abasi was the guitarist for a band named – ”Silver Spring.” In the early to mid-2000s, Tosin joined Reflux. During a show, Prosthetic Records (an American record label specializing in heavy metal recordings that was founded in LA) noticed his amazing skill and offered him a record deal as a solo artist.

In 2009, Abasi and Misha Mansoor (the founder and lead guitarist of the progressive metal band Periphery) recorded the first ”Animals as Leaders” release.

The Animals As Leaders’ album – ”The Joy of Motion” was made available for streaming on March 19, 2014.

There is no information about Tosin Abasi’s girlfriend.

”Well, the Internet really helps with music unintentionally getting in your spheres and the way that online algorithms work.”

”My older brother started getting into more serious players, and that’s how I discovered instrumental guitar rock.”

”Our new drummer is a phenomenal player so we were committed to capturing his performance.”

”I actually didn’t listen to a lot of jazz at all until I went to music school.”

”I think that we do plant the seeds with our song titles that then give you the context and the direction, and the music is just the soundtrack for all of that.”

”It’s crazy to be able to pull off a kind of music that you’ve had in your head for a long time.”

”I’m primarily self-taught but I studied jazz and classical guitar briefly at the Atlanta Institute of Music.”

“We roll the dice on every song, so the structure is often very different from song to song.”

”The types of people who live in DC, in my experience, are people who are definitely pursuing a career in politics, government, or nonprofit work.”

”And as far as evolution, I know what you mean. You don’t want to do what everybody else is doing.”

”I started being fixated on the idea of ideas being the primer and impetus behind how we treat and view other people.”

He has practiced yoga and Transcendental Meditation. During an interview, Tosin explained:

“I think both those things help to center you.”

Transcendental Meditation (TM) is a simple method that is practiced 20 minutes two times per day while sitting comfortably. TM allows you to dissolve deeply-rooted stress, fatigue, and tension as well as to recharge your batteries.

The main difference between TM and other forms of meditation is the mantra you repeat.

His favorite guitarists, bands, and musicians include:

In 2014, he appeared in the 1st episode of Guitar Power, a web series that is sponsored by Rolling Stone Magazine and D’Addario String.

Tosin toured with Born of Osiris (an American progressive metalcore band that was formed in Palatine) as a stand-in guitarist for former member Matt Pantelis.

Abasi said that when he decided to learn the guitar, his mother initially held a more conservative outlook. But, his father bought him his first guitar and was:

“totally liberal about the whole thing and encouraging and proud.”

In 2018, he toured the US to stage 32 appearances with Generation Axe, an American heavy metal supergroup, which brings together some of the greatest guitarists of all time, including – Nuno Bettencourt, Yngwie Malmsteen, Zakk Wylde, and Steve Vai.

Abasi earned most of his wealth from his music skills. In addition, Tosin has started a company that produces guitars called – ”Abasi Guitars.” Therefore, Tosin Abasi has an estimated net worth of $0.65 million.

READ THIS NEXT: Mark Morrison Bio