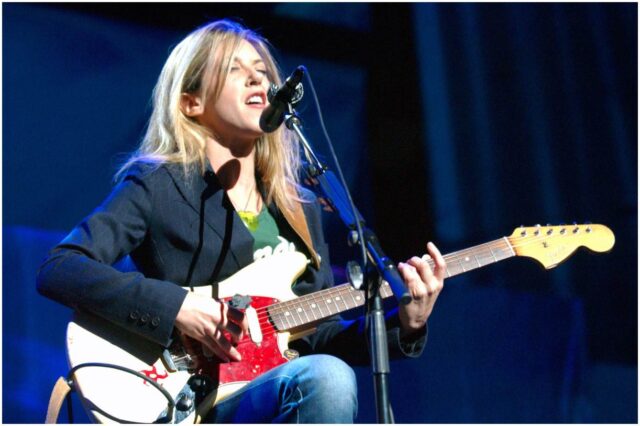 What is Liz Phair’s net worth?

Liz Phair, also known as the “Queen of Indie Rock,” is an American singer-songwriter who has released popular singles such as – “Supernova” and “Why Can’t I?.”

Liz was adopted by wealthy parents who raised her in the Chicago suburb Winnetka. She went to Oberlin College in Ohio, where she studied art.

During college, Phair was an active student, participating in cross country running, student government, and yearbook.

After graduating, Phair moved to San Francisco, where musician Chris Brokaw (a friend from college) encouraged her to start singing and record.

However, Liz left San Francisco for Chicago, where she started to release audio cassettes under the name – ”Girly Sound.” These tapes led to her signing a recording contract with Matador Records – an independent record label.

She made a dramatic debut in 1993 with the bare-bones double album – “Exile In Guyville.”

Her 1993 studio album received international acclaim; it is considered one of the most accomplished debut albums for any artist in any genre to date. Also, the album has been ranked as one of the 100 Greatest albums of the ’90s by Pitchfork and one of the 500 Greatest Albums of All Time by Rolling Stone.

All of the songs on her debut album were written by her when she was around 22.

She completed a documentary DVD, “Guyville Redux,” that featured an introduction by founder/co-owner of ATO Records (Dave Matthews), and describes the making of “Exile In Guyville” in the male-dominated Chicago independent music scene in 1993.

One year after her debut album, Liz released her second album – ”Whip-Smart.” In the same year, in an effort to promote Exile in Guyville and Whip-Smart, she made a few live radio and television appearances. In addition, Phair landed the cover of Rolling Stone with the headline – “A Rock Star Is Born.”

Her third album, named – ”Whitechocolatespaceegg,” was released in 1998.

In 2003, she released her fourth album, titled – ”Liz Phair,” on Capitol Records.

In 2005, she released her fifth album, entitled – ”Somebody’s Miracle,” also on Capitol Records.

After one year, Liz began working as a television composer. In addition, she released a song, titled – “Faith and Tenderness.” The song was sold on a compilation disc featuring other artists exclusively at ”Banana Republic.”

The current artists of The Smashing Pumpkins are – Chamberlin, Corgan, Iha, and guitarist Jeff Schroeder.

In 2018, Billboard wrote that Liz has signed a 2-book publishing deal with Random House. It was also revealed that the first book will be available in e-book, hardcover, and audiobook versions.

In 1995, Liz Phair married Jim Staskouskas, a Chicago-based film editor who had previously worked on her videos.

Liz has a son named James from her marriage to Jim. Her son was born on December 21, 1996.

After the divorce, Liz and her son relocated to LA.

READ MORE: What is the net worth of Nate Mendel?

”I don’t love being exposed which is ironic, but I really got into music because of the studio environment, which I feel more comfortable in.”

”I’m aware that I’m putting high contrast into my work. I’m staking my claim that I’m a complicated human being.”

”I’ve always had a tough time doing what I’m told to do and I think the perception with critics is that I specifically do it.”

In 2004, her song “Why Can’t I?” was used in the movie 13 Going on 30, an American fantasy romantic comedy film that follows a 13-year-old girl who dreams of being popular. The film was directed by Gary Winick and written by Josh Goldsmith and Cathy Yuspa, with Jennifer Garner as the lead actress.

“Now this is a terrible Liz Phair record. Somebody’s Miracle is mostly generic pap that any number of next-big-has-beens could have cranked out.”

Phair earned most of her wealth from selling her albums, including – Soberish, Somebody’s Miracle, and Whip-Smart.

For instance, her 2010 album Funstyle has sold over 3 million copies worldwide. However, her first album is the most popular.

Therefore, American singer-songwriter Liz Phair has an estimated net worth of $10 million.

READ THIS NEXT: Mark Morrison Net Worth