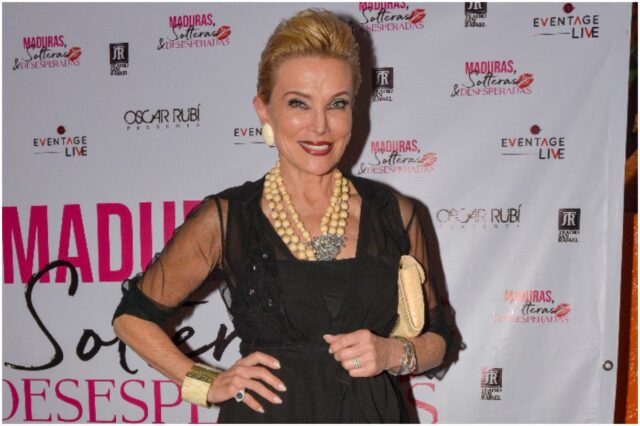 But there’s more to the elegant style maven than a life of luxury and a love of dogs.

Raquel Bessudo was born in 1943 to Polish Jewish parents living in Mexico.

They had arrived in the country at a time when only a select number of Jews were allowed to immigrate to the US.

They didn’t get into New York, and their boat was redirected to Veracruz, Mexico.

Raquel has often praised Mexico’s immigration system for allowing people like her parents into the country and welcoming them.

She has been open about how her family was treated in Mexico and is thankful that they were allowed to stay and make a home there.

Despite her wealth later in life, Raquel chose to build her life and family in the country that loved her, rather than set up a house in the US.

More recently, she has celebrated that decision as political tensions worsened across the border.

Leon, who was a strong supporter of his young wife’s dreams, encouraged her to study, and she graduated with a BA in art history and a Masters’s in Mexican history.

At 16, Raquel met her husband.

Reminiscing in 2016, she talked about how he wouldn’t let her dance with anyone else and monopolized all her time.

When she was 17, the couple were married and have three children—Doris, who stars alongside her mother in Mexican Dynasties, Patricia, and Isaac.

Leon was the son of Isaac Jack Bessudo—founder and CEO of Jarritos de Mexico.

The soda empire was co-founded by Francisco Hill, who invented the original Jarritos recipe.

When Leon was old enough, he joined the family business, and together the father and son duo made Jarritos one of Mexico’s most popular soft drinks.

As a mother, grandmother, and now great-grandmother, Raquel puts a lot of energy into her family, and still maintains her own sense of glamor and style.

Tragedy In The Family

Raquel and Doris may court the limelight publically through Mexican Dynasties and social media, but the pair—and the family in general—stay close-lipped about the losses they’ve suffered.

In 2018, Raquel opened up about the death of her only son, Isaac.

The 13-year-old had been playing soccer when he took a knock to the face from the ball.

Although he was taken to the hospital for a check-up and released, he still wasn’t feeling quite right. His sister noticed that he was groggy and he was rushed to the hospital again.

He became unresponsive and listless, and passed away a week after his initial accident.

For his father, things were never the same.

Although he would eventually find happiness in his family and turn things around, he struggled deeply with the loss of his only son.

Raquel, who was the more pragmatic of the two, pushed on for the sake of her daughters.

Daughters Doris and Patricia followed suit, with Raquel’s co-star saying that her and her sister never talked about the death of their brother again.

The head of the family—father, Leon Bessudo—passed away in 2018, following a battle with Parkinson’s disease.

In 2019, the mother-daughter duo of Raquel and Doris were cast in Mexican Dynasties.

The show’s synopsis was to follow the lives of three influential Mexican families, and to give viewers a glimpse into Mexican high society lifestyles.

The show follows three families: the Bessudos, the Allendes, and the Madrazos.

Patriarch of the Allende family, Fernando, has been an ultra-successful Mexican singer, actor, and artist.

The one-time heartthrob married his girlfriend Mari in the 1980s, and the pair went on to have two children—Elan and Adan.

Oscar Madrazo, the head of the Madrazo family that stars in the reality TV show, is the owner of Latin America’s top modeling agency.

He also owns a production company and hosts a talk show alongside his sister.

Oscar, an openly gay celebrity, is raising children with his partner, but it is his sister who stars alongside him on Mexican Dynasties.

READ MORE: What is the net worth of Brian Barczyk?

Raquel Bessudo has an estimated net worth of $10 million.

Ready to watch a go-getter great-grandma and style maven in action? Catch her Instagram here.

READ THIS NEXT: Who is Mercedes “MJ” Javid?