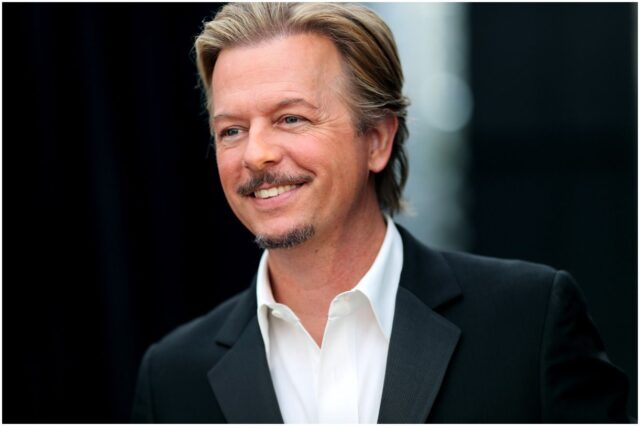 Moreover, David starred in a number of films, including:

He was born on July 22, 1964, in Birmingham, Michigan. David was raised alongside his brothers Andy and Bryan. Spade and his brothers often went to the Arizona desert as children to catch rattlesnakes (a group of venomous snakes) to keep as pets.

David is of English, Irish, German, and Scottish descent. He is the son of Wayne M. Spade, a sales rep, and Judith J., an editor and writer.

His father left his family when he was still very young.

He went to Saguaro High School and attended Scottsdale Community College. Spade was a member of his high-school chess club.

In 1986, he received his Bachelor’s degree in business from Arizona State University in Phoenix, Arizona.

In 1987, David performed on Fox’s The Late Show and was offered a spot as a rotating host by the producers upon Joan Rivers’ departure. However, David declined.

In 1989, he was one of six comics showcased on HBO’s 13th Annual Young Comedians Show.

In 1990, a friend helped Spade get a role on Saturday Night Live. While there, David became known for his brand of sarcasm.

In 1996, David quit Saturday Night Live, citing “burnout” as the reason. During an interview, David declared:

“When I leave, it will be to ease the pressure, not to be a movie star. You can’t stay there forever – it kills you inside. It ages you in dog years. It’s a tough place.”

In 2000, David produced his own TV series, titled – ”Sammy.” He also voiced characters on a few episodes of Beavis and Butt-Head.

In 2003, he starred in the film Dickie Roberts: Former Child Star. In the same year, David received a star on the Hollywood Walk of Fame.

In 2004, Spade joined the cast of 8 Simple Rules (an American sitcom comedy television show), following the death of the sitcom’s star, John Ritter, for the show’s final season.

From 2007 to 2013, he starred as Russell Dunbar in the ensemble CBS sitcom Rules of Engagement.

David Spade has never been married, however, he has been romantically linked to many Hollywood women, including:

After their short affair, David had a daughter with Jillian Grace in 2008, when the Playboy Playmate gave birth to a baby girl, named Harper.

Jillian Grace was discovered by a Playboy photographer while on Howard Stern’s radio show in the early 2000s. Grace had a short-lived film career, appearing in films, such as – Epic Movie and The House Bunny. In 2005, she was named Playmate of the Month in March.

According to a report, Harper had been planned by the couple.

”It was a mutual discussion, he told her that as he was getting older, it was something he was thinking about. And Jillian replied. ‘Are you sure this is something you want? It could happen!’”

During an interview, Spade said:

”I have a daughter now, and she came out of a situation with a girl I was dating and it was not planned. And I get angry, because my brothers and I were planned.”

”Now, I’m so happy that I have a daughter and she’s the best thing in my life, but I couldn’t picture my daughter being sick and calling me and me not answering.”

David appeared in television series and films, including:

As a performer and a writer on Saturday Night Live for five years, David is best known for his memorable catchphrases, such as – “Buh-Bye!” and “And you are…?” as well as characters including the sarcastic “Hollywood Minute” reporter on “Weekend Update.”

David shares a birthday with the following celebrities:

In his audiobook, entitled – ”A Polaroid Guy in a Snapchat World,” David opens up about his relationship with his father, Wayne. He said:

“This one’s going to be a little tricky — this is a chapter about my dad, and the way that it fits into this audiobook is I’m a dad now.”

“And the difference — and why it caused some complications with my own dad — is because he was sort of a ne’er-do-well, which is putting it mildly. I think f—up is more on the nose.”

In 2014, he had a guest role in an episode of ABC sitcom The Goldbergs.

Spade earned most of his wealth from working on Saturday Night Live show as well as starring in more than 77 movies and TV series.

David is best known for his big roles in Black Sheep and Tommy Boy.

In 2010, it was reported that David received $150,000 per episode for appearing on the TV show, ”Rules of Engagement.” Spade appeared in 100 episodes on the TV show. This means that he received about $15 million.

Therefore, American actor David Spade has an estimated net worth of $65 million.

READ THIS NEXT: Arnold Schwarzenegger Net Worth