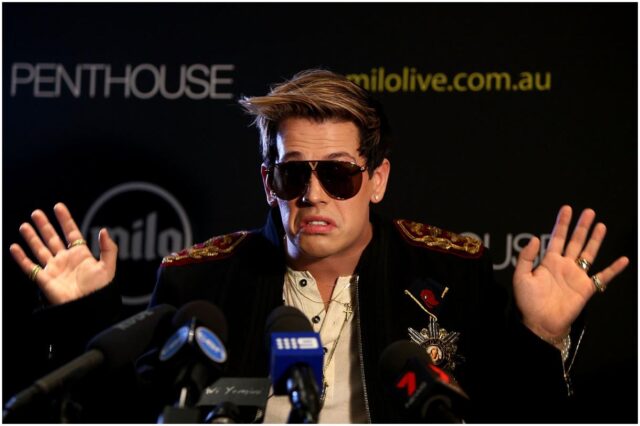 Milo Yiannopoulos, nickname – Nero, is a former writer for the website Breitbart News. In addition, Milo provided early coverage of what would become known as Gamergate.

He was born on October 18, 1984, in Chatham, Kent, England as Milo Hanrahan. Milo had a Jewish maternal grandmother.

His parents divorced when he was young. After his mother remarried, Milo stayed with her and his stepfather, however, he did not share a cordial relation with his father.

At some point, Milo adopted his Greek grandmother’s surname – Yiannopoulos.

Milo attended Wolfson College and the University of Manchester, nevertheless, he dropped out of both schools and never received a degree.

Yiannopoulos said about his education:

”If you’re as talented, intelligent and handsome as I am, you don’t need a degree to succeed.”

”I hate to brag, but, if I died in a heinous accident, someone would probably write it up. Like, people have heard of me. It would be news.”

In 2011, Milo co-founded the tech journalism website the Kernel. In 2014, after encountering legal battles with writers who sued for unpaid earnings and running up large debts, Milo sold the website.

In 2015, Yiannopoulos was appointed as a senior editor at Breitbart News, a far-right American news website that was founded in mid-2007 by Andrew Breitbart, a conservative commentator.

For Breitbart News, Milo has written columns titled “Would You Rather Your Child Had Feminism or Cancer?” and “Birth Control Makes Women Unattractive and Crazy.”

Interestingly, Breitbart News has close ties to the Trump administration since Steve Bannon headed Trump’s presidential campaign. In addition, Steve Bannon was appointed as his chief strategist in the White House.

“inciting or engaging in the targeted abuse or harassment of others.”

For years, Yiannopoulous has used Twitter not only to voice his opinions, but also to direct his followers toward his opponents.

A company spokesperson said in a statement:

“People should be able to express diverse opinions and beliefs on Twitter.”

The ban comes after Milo’s abuse of Leslie Jones over her role in the Ghostbusters reboot.

“I wrote a bad review of a movie. Am I not entitled to do that? I said she looked like a dude. She does.”

Yiannopoulos went on to say:

”I said that she was barely literate, which she is. And I simply don’t accept that an A-list Hollywood celebrity is sitting at home crying over mean words on the internet.”

Before he was banned, Yiannopoulos declared that he had no regrets about his behavior towards Leslie. He also said:

“But feminists, on the other hand, should have regrets that they have taught strong women that they are victims and attacked people for having different opinions to them on Twitter.”

Moreover, Yiannopoulos has been criticized for comments he has made about feminists and gay people, Muslims, transgender people, Black Lives Matter activism.

He responded via his employer’s site, writing:

”Twitter is holding me responsible for the actions of fans and trolls using the special pretzel logic of the left. Where are the Twitter police when Justin Bieber’s fans cut themselves on his behalf?

“This is the end for Twitter. Anyone who cares about free speech has been sent a clear message: you’re not welcome on Twitter.”

In 2017, Milo Yiannopoulos jetted out to Hawaii to marry his long-term boyfriend, John.

Yiannopoulos initially secured the book for an advance of £200,000 ($255,000), but after a recording emerged which appeared to show Milo endorsing sex between older men and “younger boys,” Simon & Schuster (an American publishing company that publishes around 2,000 titles per year) canceled the deal in February 2017.

In July 2017, Milo set out to sue Simon & Schuster for $10 million for breach of contract. As part of the case, the publisher has submitted documents that reveal the problems they had with ”Dangerous.”

Among other criticisms, Simon & Schuster’s notes say that a chapter requires “a better central thesis than the notion that gay people should go back in the closet” as well as Milo needs a:

“stronger argument against feminism than saying that they are ugly and sexless and have cats.”

According to reports, Milo paid $100,000 to Allum Bokhari (the senior technology correspondent for Breitbart News) to ghostwrite his book.

Yiannopoulos earned most of his wealth from selling his book – Dangerous, especially on Amazon (around $17 per hardcover), working as a senior editor at Breitbart News, co-founding the website the Kernel, from advertisements on his YouTube channel, and advertisements on his website dangerous.com.

Therefore, award-winning journalist Milo Yiannopoulos has an estimated net worth of $3 million.

READ THIS NEXT: Is Theresa Roemer married?

2 thoughts on “Milo Yiannopoulos Net Worth 2022”