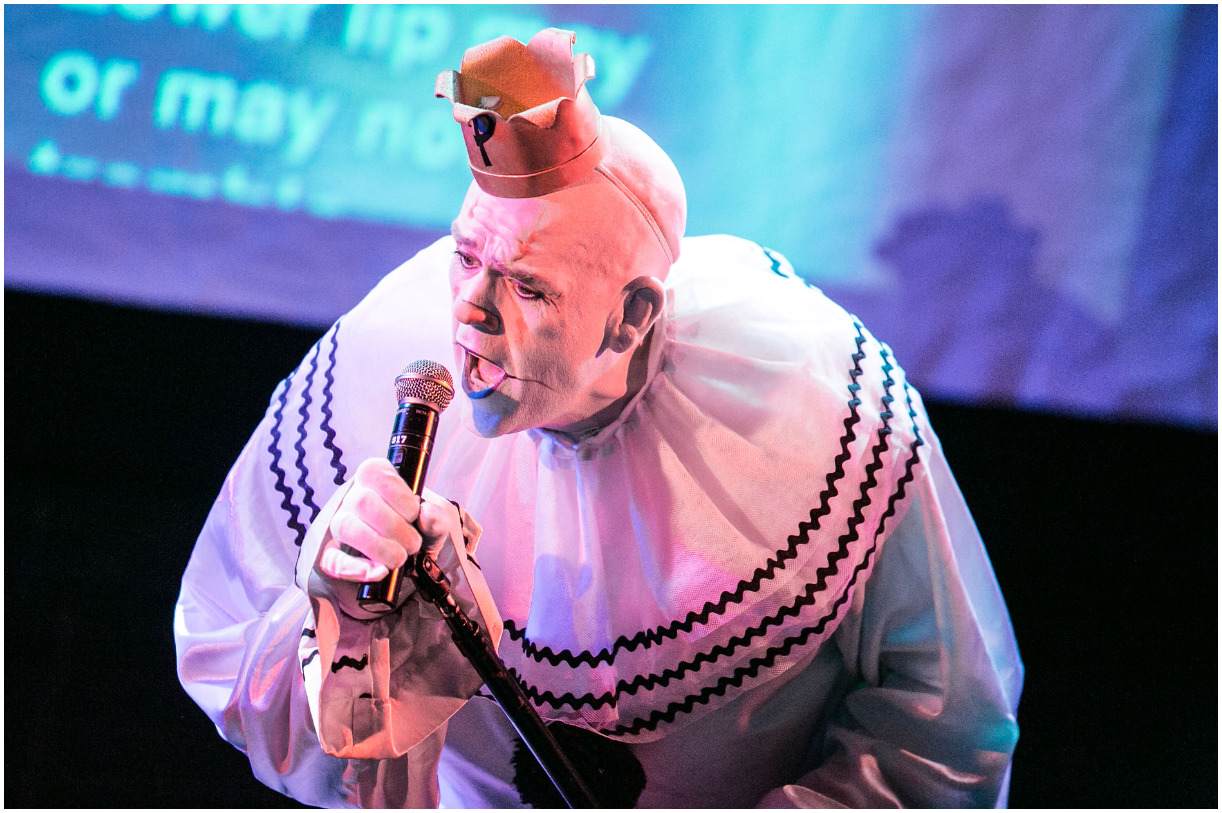 Big Mike Geier (birth name – Michael Geier) is an American comedian who first stepped on the national stage at America’s Got Talent in 2017. Geier performs as the silent and sad clown, Puddles Pity Party, leading the band Kingsized.

“Puddles gives an emotive performance that resonates with all kinds of folks.”

Mike went on to say:

“The crowd really responds to him. There’s something about a giant sad singing clown that comforts us, let’s us know it’s ok to feel, to show our feelings.”

Mike grew up with four sisters and two brothers, all of whom grew to be at least 6 feet tall.

Geier started his career in entertainment in the 1990s as the frontman for the Swing Noir band The Useless Playboys.

Puddles’ voice has been described as golden, however, he is too shy to speak.

“His special effect is a textured voice laced with melancholy…what makes him transcend the trope is his vulnerability.”

Can you guess who's trending on @facebook? We will give you three guesses 😁 Be sure to get tickets now for Europe 2016 http://postmodernjukebox.com #pmjtour #MadWorld #puddlespityparty

“It seems like a parody. But when Puddles opens his mouth to sing, it’s beautiful. Operatic.”

In 2011, Mike started to appear regularly at the Manderley Bar in New York’s immersive theater show – ”Sleep No More.”

In 2013, Geier opened for American rock band Eels during their European and US tours.

On September 27, 2014, his live performance of Canadian singer Leonard Cohen’s “Hallelujah” was filmed by Gary Yost, an American filmmaker who is best known for leading the team that created Autodesk 3ds Max.

In 2014, Geier was a featured performer in La Soiree’s Southbank show in London.

In October 2017, Puddles made an appearance in a Cartoon Network ad promoting new episodes of OK K.O.! Let’s Be Heroes and Teen Titans Go!

In 2017, Mike appeared on America’s Got Talent, a televised talent show competition. Puddles and Jeff Trachta were eliminated, while American comedian Preacher Lawson advanced to the Semifinals of AGT.

Geier started his YouTube channel named – ”Puddles Pity Party” on November 23, 2011. His channel has over 55 million views and more than 596,000 subscribers.

In October 2013, he recorded a cover of New Zealand singer Lorde’s “Royals” with Postmodern Jukebox. The single was uploaded on YouTube and it currently has more than 27.3 million views.

The most popular video on his channel is titled – ”Puddles Pity Party – The Sound Of Silence.” It was uploaded on October 13, 2017, and it has over 5.2 million views.

Geier is married to Shannon Newton, his business partner.

Hmmm, I wonder where I should go on Nov. 29? Maybe a little trip to Atlanta… #puddlespityparty #countdown #27days #jubilee #centerstage

”It’s a sad and beautiful world, and we’re all in it together, even when we’re totally alone.”

”It’s that balance of being honest in the creativity and also giving people what they want.”

“Puddles gives an emotive performance that resonates with all kinds of folks.”

”My problem as a creative person – or it could be my strength – is I’m not always aware that I’m living in an exceptional time.”

Another famous American clown is Bello Nock. The two know each other.

He performed in Just for Laugh’s “Circus Awesomeus,” a gala filmed for HBO Canada.

Puddles has performed at the following festivals:

Geier earned most of his wealth from performing as Puddles. Mike has a few streams of income, like – tickets sold to his shows as well as advertisements on his ‘Puddles Pity Party’ YouTube channel (about $110,000 in revenue). Therefore, Big Mike Geier has an estimated net worth of $0.4 million.