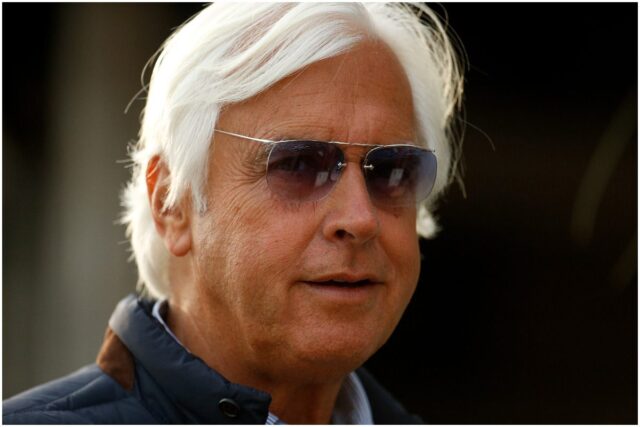 What is Bob Baffert’s net worth?

During his youth, Baffert raced as a Quarter Horse jockey. He won his first official race at a legal track at age 17.

He earned a Bachelor of Science degree from the University of Arizona’s Race Track Industry Program.

Bob moved to California in the 80s. There, he started to work at Los Alamitos Race Course.

Bob trained the gray colt Silver Charm to win the Preakness Stakes and Kentucky Derby in 1997.

In 1998, he won the Kentucky Derby for the second time.

In 2002, Bob won the Derby for the third time with War Emblem. He nicknamed the colt ‘Hannibal Lecter’ for his habit of biting.

In 2007, Baffert was inducted into Lone Star Park’s Hall of Fame.

In 2009, Bob was inducted into the National Museum of Racing and Hall of Fame.

In 2014, he won his first Breeders’ Cup Classic with Bayern.

In 2015, Baffert trained a two-year-old colt, American Pharoah, to win the Triple Crown, a title awarded to a three-year-old Thoroughbred horse who wins the Belmont Stakes, Preakness Stakes, and Kentucky Derby.

”It has been a privilege to train this horse,” Bob stated in an interview. He added: ”This is the greatest horse I’ll ever see.”

”Now, when I visit ‘American Pharoah’ at (Ashford Stud), it still makes me emotional,” Bob told Blood-Horse. ”All of the memories come back. All of those great memories.”

In 2016, Bob made a guest appearance on the TV series ”Undeniable with Joe Buck.”

In March 2012, he suffered a heart attack while in Dubai to supervise the preparation of Game On Dude for Saturday’s $10 million Dubai World Cup.

”We called 911, and the paramedics came right away,” said a co-owner of Game On Dude, Bernie Schiappa.

”I want to thank my wonderful wife Jill, who convinced me I was having a heart attack and called paramedics,” Bob later tweeted.

In 2018, he was inducted into the Kentucky Sports Hall of Fame. Also in 2018, Baffert appeared in the documentary ”7 Days Out.”

He trained the 2018 Triple Crown Winner, Justify, a chestnut stallion with a large white blaze on his forehead.

Justify is only the second horse to win the American Triple Crown with an undefeated record.

In September 2018, it was reported that Justify would stand at Ashford Stud. His stud fee is around $150k.

On September 11, 2019, Justify tested positive for scopolamine, a banned medication, because it can improve horses’ heart-rate and breathing.

”I unequivocally reject any implication that scopolamine was ever intentionally administered to Justify or any of my horses,” Bob declared. He continued: ”Justify is one of the finest horses I’ve had the privilege of training and by any standard is one of the greatest of all time.”

”I intend to do everything possible to ensure I receive no further medication complaints,” Baffert later stated.

The two first met in 1998 when Moss was hosting a Louisville morning TV show.

With his second wife, Bob has a son, Bode (born in 2004). He was named after champion skier Bode Miller.

”I want my legacy to be one of making every effort to do right by the horse and the sport.”

”It’s important for every trainer to be in the Derby, and I’ve been lucky enough to have some good horses in it.”

”I want to have a positive influence on the sport of horse racing.”

Baffert earned most of his wealth from training racehorses. His horses have won more than $313 million.

Bob made guest appearances in the television series – Arli$$, Rome Is Burning, Undeniable with Joe Buck, and Take Home Chef.

He also makes money from sponsors. For instance, Burger King paid Baffert $200k to have a  mascot stand next to him at Belmont Stakes.

Therefore, American racehorse trainer Bob Baffert has an estimated net worth of $35 million.

READ THIS NEXT: Who is Naomi Simson?