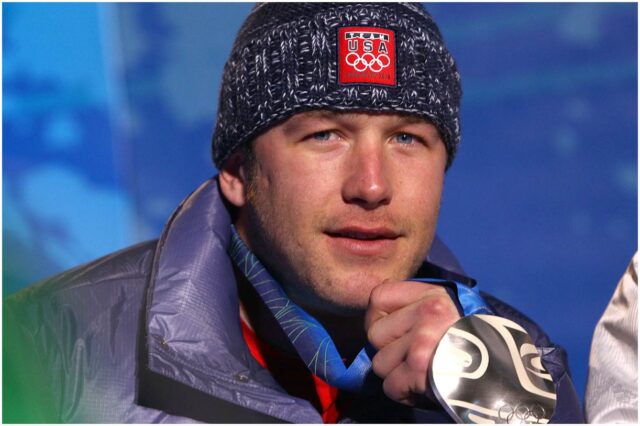 He is the most decorated male US skier in history with six Olympic medals, four world champs, and 33 World Cup wins.

He is the only American ski racer in history to win medals at three different Olympics. Bode became known for his unorthodox, fearless, and fast skills.

Bode grew up in the forests of New Hampshire without running water or electricity. Also, he was raised as a vegetarian.

During an interview, Miller said about his childhood:

“When I was little, I spent a lot of time by myself.”

”When other kids were in school, I was skiing and thinking about things. I was alone on the mountain.”

He began skiing at the age of 3. When he was 6, his parents broke up.

Miller was homeschooled until the third grade.

By the age of 11, Bode was the star of the local junior ski team.

In the follow-up year, he won silver in super-G and gold in giant slalom and combined at the World Championships in St. Moritz, Switzerland. During the season, Miller also won two other giant slaloms.

In 2008, Bode won his second overall championship at the World Cup finals in Bormio, Italy.

On February 21, 2010, Miller clinched his first Olympic gold medal in the super-combined. In the same year, he was nominated for the Associated Press’ Male Athlete of the Year award.

On February 16, 2014, after winning a bronze medal in the super-G race, he became the oldest Olympic medalist in alpine skiing history.

He retired from skiing in 2017. While his skiing career was coming to an end, Bode started to invest in horse racing.

On October 18, 2005, he released his autobiography, named – ”Bode: Go Fast, Be Good, Have Fun.” It was published by Villard/Random House, and co-written with his friend Jack McEnany.

In 2019, a new documentary was released by Teton Gravity Research regarding Bode’s career, titled – ”Forces of Nature.”

In 2012, Bode Miller married Morgan Beck, a model and professional volleyball player who played at the University of California, Berkeley.

The only people who were in attendance at their wedding were the photographer and the officiant.

He has a son, Samuel, with a former flame, Sara McKenna. Sara got pregnant with Samuel after meeting Bode through a dating site.

His wife, Morgan, gave birth to their son Nash Skan Miller in May 2015.

“They’re very different. Asher is much more needy. He loves the attention; he loves being snuggled.”

With Morgan, the skiing champion had another daughter named Emeline “Emmy” Miller who passed away at 19 months old on June 10, 2018.

Emmy drowned in a swimming pool while Miller and his pregnant wife were attending a neighbor’s party.

“We are beyond devastated. Our baby girl, Emmy, passed away yesterday. Never in a million years did we think we would experience a pain like this.”

It’s unclear how long she was in the water, however, paramedics rushed to the scene and performed cardiopulmonary resuscitation before transporting her to a hospital. Her cause of death was classified as a drowning.

In a recent interview, Morgan said:

“There’s not a day that goes by that I don’t pray for the opportunity to go back to that day and make it different.”

In August 2019, the couple announced that they are expecting identical twin boys.

In 2019, Bode and his family moved to the Montana mountains to settle into a new home near Big Sky Resort north of Yellowstone National Park.

”I don’t really like adrenalin that much. It generally represents danger, and I’m not a big fan of danger.”

”Fame is almost a poison.”

“Guilt is a very painful thing.”

“Newspapers depress me, television is stupefying, and radio is full of bad music and people who talk more than they think.”

”It is other people who want me to win medals.”

In 2006, Flying Downhill’s documentary was released. It focuses on Bode’s personal philosophy and earlier life.

In April 2013, his younger brother was found dead in Mammoth Lakes, California, after suffering an apparent seizure.

He worked as a counselor for Tamarack Tennis Camp.

Miller earned most of his wealth from skiing. During his career, Miller won two silver medals at the 2002 Winter Olympics in Salt Lake City and was the winner of the overall FIS World Cup in 2005.

He is one of five skiers who have won Olympic medals in four different disciplines.

In addition, Bode earned some money from sponsors. Throughout his career, Bode has worked with many companies, including – Rossignol, Fischer, Head Alpine Equipment, Nike, Kjus, Atomic, and K2.

Therefore, retired skier Bode Miller has an estimated net worth of $8.5 million.