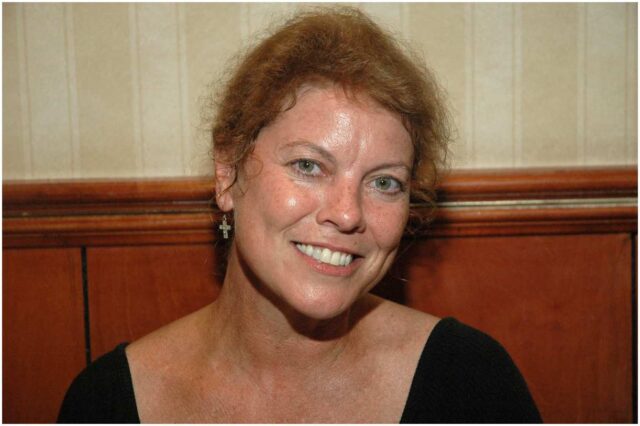 Erin Moran was an American actress who was best known for playing Joanie Cunningham on the sitcom Happy Days. Moran was only 13 years old when she landed the role.

Erin was the second youngest of 6 children. Two of her brothers are actors: Tony Moran (played Michael Myers during a scene in Halloween – 1978) and John Moran.

Her first acting role was at the age of 5, in a television commercial for First Federal Bank.

At the age of 6, she got a role in the 1966 television series Daktari (starring Marshall Thompson as Dr. Marsh Tracy, a veterinarian in East Africa) that ran till 1969.

Her biggest break came with the debut of “Happy Days” in 1974. She continued the role in 1982, in the short-lived spin-off series, entitled – ”Joanie Loves Chachi,” alongside Scott Baio, an American actor who is best known for the titular hero of the musical film Bugsy Malone (1976), Dr. Jack Stewart in the medical-mystery-drama series Diagnosis: Murder (1993–1995), and his role as Chachi Arcola on the sitcom Happy Days (1977–1984).

In 1984, she appeared on Tattletales with makeup artist Jeffrey Hamilton as her partner.

In 2008, Moran appeared on VH1’s Celebrity Fit Club (a reality television series that follows 8 overweight celebrities as they try to lose weight for charity) as a contestant. In the same year, she won Fox Reality Channel Really Award for “Favorite Altered State” for her appearance in Celebrity Fit Club.

The Harrison County Sheriff’s Department declared that the authorities in Indiana found her body Saturday afternoon after getting a 911 call at 4:07 p.m. for “an unresponsive female.”

According to a joint statement by Coroner Gary Gilley and Sheriff Rod Seelye:

The statement did not say what kind of cancer Moran had. But, she reportedly died of a throat cancer complication.

Throat cancer is a term typically used to refer to any type of cancer arising from the upper food pipe (pharynx), back of the mouth, and voice box (larynx). An estimated 345,000 new cases of throat cancer were diagnosed worldwide in 2018.

“Standard toxicology tests were performed and the results are pending, however, no illegal narcotics were found at the residence.”

One of Erin’s close friends, Erin Murphy, an American actress, and television host, who played Tabitha on the 1960s series “Bewitched,” wrote on Twitter after Erin’s passing:

“So sad to share that my friend Erin Moran has passed away. Rest In Peace, sweet girl.”

Ron Howard, an American filmmaker and actor who starred in Happy Days, tweeted after Moran’s death:

“Such sad news. RIP Erin Moran. I’ll always choose to remember you on our show making scenes better, getting laughs and lighting up tv screens.”

During an interview with “The Bernie & Sid Show,” Scott Baio said:

“I’m OK, a little shocked but not completely shocked that this happened. My thing is, I feel bad because her whole life, she was troubled, could never find what made her happy and content.”

”For me, you do drugs or drink, you’re gonna die. I’m sorry if that’s cold, but God gave you a brain, gave you the will to live and thrive and you gotta take care of yourself.”

“Erin was a person who made everyone around her feel better. She truly cared about others first, a true angel.”

”I will miss her so much, but know that she is in God’s hands. RIP sweet angel.”

Don Most, an American actor and singer who played Ralph Malph on the Happy Days show, said:

“I am so incredibly sad to hear about Erin. She was a wonderful, sweet, caring, talented woman.”

”As I write this I can’t really comprehend this right now. A very painful loss. It gives me some comfort to know that she’s with Tom, Al, Pat, and Garry. Rest In Peace, sweet Erin.”

READ MORE: Who is Katherine Heigl?

In 1984, she made several other television guest appearances, including:

Another famous actress who passed away is Doris Day.

Moran earned most of her wealth from appearing in numerous movies and TV shows, but Happy Days was her biggest financial success.

However, due to a lack of roles, in July 2010, her house in Palmdale was foreclosed on and she had to be evicted.

After losing their California home to foreclosure, Erin and her husband (Steve Fleischmann) moved into a trailer park with Steve’s sick mother.

In 2012, Moran sued, with her Happy Days show co-stars Marion Ross, Anson Williams, the widow of Tom Bosley, and Don Most Paramount and CBS for $10 million, claiming they didn’t receive any merchandise royalties they were owed under their contracts.

In July 2012, the actors settled their lawsuit; each received a payment of $65,000. In 2017, some reports said that Erin was reportedly kicked out of her trailer park home in Indiana because of her hard partying ways.

Therefore, at the time of her death, American actress Erin Moran had an estimated net worth of $10,000.

READ THIS NEXT: Arnold Schwarzenegger Net Worth