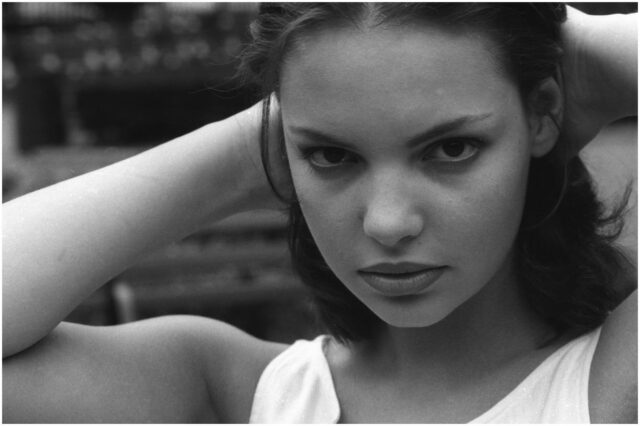 Katherine Heigl is an American actress, former fashion model, and film producer who started her career as a child model with Wilhelmina Models.

She was born on November 24, 1978, in Washington, D.C., to Paul Heigl, an accountant and executive, and Nancy Heigl (born Engelhardt), a personnel manager.

She has an older sister, Meg Heigl-Beltran, and two older brothers, Holt and John. Brother Jason died from head injuries, suffered in a car accident when Katherine was very young.

The Heigl family unanimously agreed that organ donation was the best way to preserve her brother’s legacy and help save the lives of others.

At age 9, she got her start as a child model with the world-famous Wilhelmina Modeling Agency.

In 1995, Katherine played “Sarah Ryback,” the niece of Steven Seagal’s character, in Under Siege 2: Dark Territory (1995), which was her “debut” in the action film genre.

From 1999 to 2002, she co-starred as Isabel Evans on the television series Roswell.

After Roswell ended in 2002, Katherine starred in a few television movies, including Love’s Enduring Promise (2004) and Love Comes Softly (2003).

In 2005, Katherine was October on FHM magazine’s pin-up calendar.

In late 2006, she was nominated for the Golden Globe Award for Best Supporting Actress – Miniseries, Series, or Television Film for her work on ”Grey’s Anatomy.”

In 2009, she starred with Gerard Butler in ”The Ugly Truth.” The film earned $205 million at the worldwide box office and was made on a budget of $38 million.

In 2013, Heigl appeared alongside Susan Sarandon, Diane Keaton, and Robert De Niro in ”The Big Wedding,” a comedy about an estranged family reuniting for a ceremony.

In 2018, she joined the cast of the USA Network legal drama series ”Suits,” where she would play the role of Samantha Wheeler.

In 2011, Heigl portrayed Michelle in the drama ”Fear of Rain.”

Her husband is an American actor and singer-songwriter. His songs “Only You” and “Amazing” reached the top 10 on that chart. In addition, Josh has had four hit singles on the Billboard Adult Top 40 chart and has recorded for Hollywood Records, DNK Records, and Threshold Records as a pop-rock artist.

She had met Kelley in spring 2005 when she appeared in his music video “Only You.” About 12 months year later, they became engaged.

Katherine said that she and Josh chose not to live together before they were married.

At their wedding, the bridesmaids wore red. The couple wrote their own vows. Katherine walked down the aisle to an acoustic song written by Kelley and performed by guitar and cello players.

On December 23, 2018, the couple celebrated their 11-year wedding anniversary.

”I always knew I wanted to adopt from Korea,” Heigl told Scholastic. ”We have talked about having biological children as well, but we decided to adopt first.”

In addition to their two daughters, they have a son, Joshua Bishop Kelley Jr., who was born on December 20, 2016.

To celebrate Joshua’s first birthday, Heigl shared a series of photos on Instagram opening up about his traumatic birth. Heigl wrote:

“My doctor struggled to get him out because he was really wedged in there and not quite ready to leave the womb.”

”When she finally pulled him out at exactly 12:33 pm he didn’t start breathing and they worked quickly to get oxygen in him and start his tiny lung.”

“I’ve grown into accepting that ambition is not a dirty word.” (NBC San Diego)

”People make mistakes – they say things they shouldn’t have or didn’t necessarily mean.”

She is a big fan of Adriene Mishler, an American yoga teacher.

Heigl earned most of her wealth frоm thе fаѕhіоn mоdеlіng as well as starring in many movies and TV series, including – Life as We Know it, The Ugly Truth, Romy and Michele: In the Beginning, Love Comes Softly, Jenny’s Wedding, New Year’s Eve, Home Sweet Hell, One for the Money, Love’s Enduring Promise, Grey’s Anatomy, My Father the Hero, Wuthering Heights, Critical Assembly, King of the Hill, and The Big Wedding.

In June 2010, she starred in Life As We Know It as well as in the comedy-thriller Killers. She received about $12 million for both films.

READ THIS NEXT: Who is Tracy Nelson?