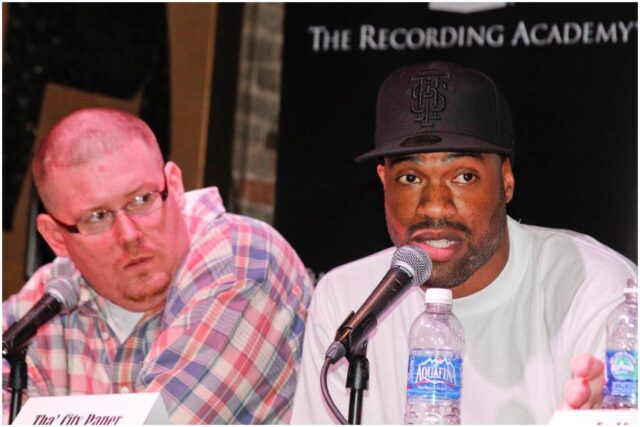 Haystak is a Nashville-born rapper who spits rhymes about his “white trash” life—growing up poor and resorting to crime to make ends meet.

But how much truth is he spittin’ on his tracks—and what do we know about his life at all?

Haystak was born Jason Winfree. He was born on March 22, 1973, to teen parents in Lebanon—the county seat of Wilson County, Tennessee.

Winfree was raised by his grandparents in a poor area of Lebanon, and took to a life of petty crime early on.

By 15 years old, he had been arrested—and eventually convicted—of drug possession, after bringing Valium and cocaine to school.

His experiences as self-described ‘white trash’ led to him penning his own raps.

Haystak married long-term girlfriend Dania Walker, and the pair have two daughters—Michaela and Kennedy. The pair continued to co-parent following their divorce in 2015.

Following Jason Winfree’s brush with the law as a teenager, he realized that rap music was a better path for him.

His friends and fellow aspiring rappers credited him with a slick, introspective style, but as an overweight white guy, serious labels and those on the hip hop scene weren’t eager to give him a chance.

Winfree found support in an unlikely place—through a small local label run by Kevin Grisham and Sonny Paradise. Street Flava Records signed Winfree, who was going under the name Haystak, to produce his debut album in 1998.

The album, Mak Million, offered an insight into the life of an impoverished white boy from the South, and gained Haystak some serious attention on the underground rap circuit.

Fans were thrilled, and demanded more from the young up and comer.

After 2002’s The Natural was successfully received by the mainstream hip hop community, Haystak followed up with an extensive discography list:

Haystak might not be a household name, but he’s got no problem taking on much bigger fish in the Hip Hop sea.

The tension, which is believed to have stemmed from Eminem’s beef with the Insane Clown Posse, triggered Haystak to copy Em’s skits and encourage crowds at his own gigs to chant “F*ck Eminem”.

D12’s Bizarre issued a cutting diss to Haystak, who clapped back—and doubled down by dissing 50 Cent.

Eminem—who has no problem calling out lame-duck rappers like Machine Gun Kelly and Benzino—didn’t bother wasting studio time or energy by responding.

Haystak may have faced a learning experience at 15 when he was convicted on drug possession charges, but it wouldn’t be his last brush with the law.

In 2004 he was found guilty of statutory rape. In 2006 he was convicted of assault and sentenced to 11 months 29 days of probation. Several years later, in 2014, he was arrested on domestic violence charges.

He also copped a charge of intent to commit sexual abuse in Iowa—but was found not guilty after video evidence was produced. His accuser, who hasn’t been publically named, admitted that Haystak was innocent in 2019.

Winfree earned most of his wealth from selling copies of his albums, which include – The SouthWest Connection, Car Fulla White Boys, Return of the Mak Million, Still Standing, Crackavelli, From Start to Finish, Came a Long Way, Walking Tall, and Hard 2 Love.

Therefore, American rapper Haystak has an estimated net worth of $2 million.

Tired of Hick Hop and Mumble Rap? Maybe self-proclaimed White Trash Rap is more your thing…you can listen to some here.

READ THIS NEXT: Who is Veronica Vega?