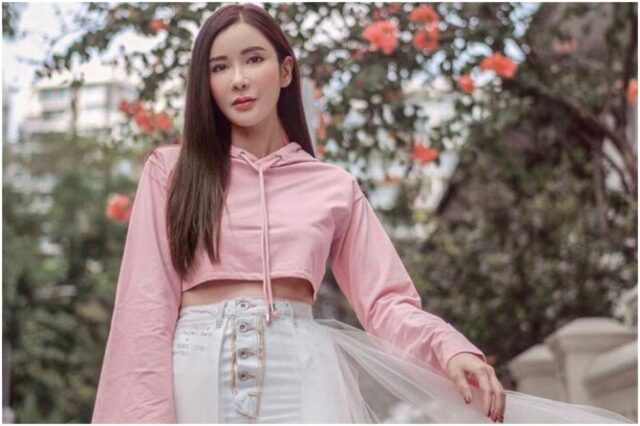 Jamie Chua may be an Insta-celeb on The Rich Kids of Singapore Instagram page, but she’s not a kid at all. In fact, her children—especially her 22-year-old daughter—are probably better suited to the page. Socialite Jamie may look incredibly young, but she’s got a marriage and divorce behind her—as well as several major businesses, and a lifestyle that most women her age could only dream of.

With an Instagram following of over a million, and invites to the ICON ball and Paris Fashion Week shows, the Indo-Chinese mom of 2 is often hailed as Singapore’s Queen of Instagram.

Born in Singapore on October 24, 1973, Jamie Chua is the first-born of three children. Her father is a travel agent, and her mom was a stay at home mother devoted to raising her brood.

Although the family had a reasonable income by Singaporean standards, Jamie didn’t grow up with the luxuries she enjoys now. She went to school at the Convent of the Holy Infant Jesus.

At the age of 15, while she was still attending CHIJ secondary school, she decided she wanted to model. Her parents gave her the money required to go to modeling classes, and she auditioned for advertising campaigns as well as modeling jobs.

Eventually, she was able to pay her parents back and by her first real designer label, Chanel.

Unfortunately for Jamie, modeling wasn’t the great success she had hoped for. As a teenager, she ended up going to work for Singapore Airlines as an air hostess.

Over the next three years, she worked her way up to become a Business Class air hostess. It was while working in SIA Business Class that she met Nurdian Cuaca.

Cuaca, an Indonesian executive, had a keen business mind and a talent for real estate investing. The pair began dating, and married a few years later.

Jamie quit her job with the airline and went to work for her husband’s company—Cloud 9 Lifestyle.

In 1995, Jamie and Nurdian welcomed their first child—a boy named Cleveland. Three years later, a daughter named Calista arrived. Chua has spoken openly about her desire for her children not to grow up spoiled, and her efforts to keep them humble.

At this point in her marriage, her husband’s business prowess was starting to shine through. Thanks to his savvy real estate investments and entrepreneurial spirit, their wealth was growing exponentially.

In February of 2010, 17 years after their wedding, Jamie Chua petitioned her husband for a divorce.

The Rich “Kid” of Singapore

Although her marriage to Nurdian Cuaca is the only reason she is such a wealthy woman, Jamie Chua lives like she has unlimited earning potential. And perhaps she does!

Keeping up with the Rich Kids of Singapore is almost a full-time job for a middle-aged woman without wealthy parents to support her. This doesn’t stop Jamie Chua from trying, though.

Singapore’s Queen of Instagram employs two maids to travel with her and snap the perfect photos for her active social media following.

According to Singapore media, she also spends upwards of $10,000 per month to maintain her youthful image and slow down the hands of time.

The socialite also shared that she gets her fat cells frozen and destroyed with a sculpting body treatment twice weekly, and scalp treatments weekly to keep her hair shiny and thick.

She admits to visiting a cosmetic surgery clinic fortnightly for facial treatments.

One of her most lavish purchases would have to be her handbag collection, though. Chua owns over 200 Hermes bags—which she stores in a 700 square foot, fingerprint-secured closet.

Not wanting to be mistaken for an opulent but vacuous trophy wife, Chua describes herself as an entrepreneur. Her business ventures include:

Luminous1 by Jamie Chua. Founded in 2015, the company is no longer active although Chua states that she uses the products daily.

The Closet Raider. Founded in 2014, the business model gained early success as a second-hand designer goods market. It has since been struck off the companies register.

Cloud 9 Lifestyle. Founded in 2006 under the guidance of Chua’s then-husband, Cloud 9 sold Manolo Blahnik shoes. The parent company, D’League, which was majority-owned by Cuaca, held the franchise rights to sell the iconic heels, and the business was a great success.

In 2010, following her divorce, Chua opened a second store at Marina Bay Sands. The stores, which no longer had the backing of D’League, struggled financially, and both stores were shut down within 12 months.

Jamie Chua has an estimated net worth of $25 million.

Want to learn more about the Rich Kid of Singapore who is old enough to be the other Insta-celebs’ mother? You can follow her ultra-active account here.

READ THIS NEXT: Who is Donnie Swaggart?