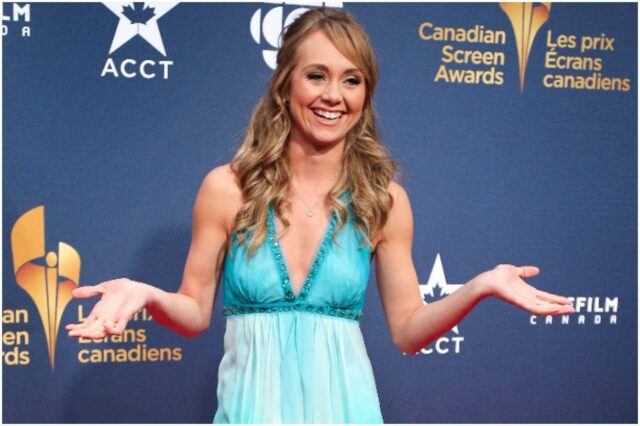 What is Amber Marshall’s net worth?

Amber Marshall (nicknamed – Mother Nature) is a Canadian television actress who began entertaining audiences as Amy Fleming on the series Heartland in 2007.

She got her first agent when she was 11 years old.

In 2000, Marshall made her acting debut in Super Rupert, a television series.

In the same year, she appeared in The Christmas Shoes, a drama film that is based on the novel and song of the same name.

In 2003, she starred in The Elizabeth Smart Story, a crime drama film about the high-profile Elizabeth Smart kidnapping case. For performing in the film, she was nominated for the Best Performance in a TV Movie, Miniseries, or Special – Leading Young Actress.

In 2004, Marshall performed in Dark Oracle, a Canadian-produced television series that was created by Canadian television writer Jana Sinyor.

In 2007, Amber started to appear in Heartland, a Canadian family drama TV series that debuted on CBC. It follows sisters Lou and Amy Fleming and their grandfather Jack Bartlett (played by Canadian actor Shaun Johnston).

”My character and I follow many parallels in our daily lives.”

”I would say that Amy has always been a little more dramatic than myself since that is what creates tension on screen.”

The series is not meant for young kids; however, most older tweens will be able to handle it.

The 3rd-season premiere brought in more than 1 million viewers.

On November 1, 2011, the standalone TV movie A Heartland Christmas was released on DVD in Canada.

Much of the series is filmed on location in and around High River, Alberta. In May 2019, the series was renewed for its thirteenth season.

”It’s been so incredible. Very, very rarely do you see a show go even six seasons with the same cast.”

”But people still love it. Our baby on the show is being raised by a full family. I like that concept.”

In 2015, the series passed Street Legal (a Canadian legal drama TV series that aired on CBC Television from 1987 to 1994) to become the longest-­running hour-long drama in Canadian television history.

During an interview, Amber said about her character in the series:

”I believe that over the years my character Amy has become more like myself and vice versa.”

In a different interview, Marshall confessed:

”The liberty horse scenes are still my favorite to do, but I like when there’s some emotion with horses.”

Amber went on to say:

”I love when Amy is upset about something and she looks to her horses for that support.”

In 2013, she was voted Canada’s Favourite Screen Star at the Canadian Screen Awards.

In 2020, Amber portrayed Mary McDonald in ”With Nothing But Our Courage.”

Marshall said about her wedding:

“We were our own wedding planners, and it wasn’t stressful for me.”

Currently, the couple lives on their ranch in Alberta, Canada. At their ranch, Amber has several horse companions, named:

”I think if I ever do any other projects, I’ll probably find it too easy because I’m used to juggling so many things.”

”We are so lucky to have such incredible animal handlers and wranglers work on the show, and you usually know exactly what you’re going to get.”

“Working on a show that’s outdoors and with animals is a blessing.”

”It’s a drama. There’s always going to be tragedy.”

”I feel like a large part of my life has been spent on Heartland, and I love every minute of it.”

”New ideas and visions help motivate all of the cast and crew from being complacent.”

”You can’t force some things to happen no matter how hard you try.”

Amber has volunteered at a Wildlife Rehabilitation Centre where she took raptor classes to work with hawks and falcons.

Marshall was introduced to horses shortly after saying goodbye to her toddler years.

”I first started riding when I was about three years old.”

”My parents had taken me to this little local fair and there was a pony ride circle.”

The actress has also said that there are two things she loves the most – horses and acting. Fortunately, both her passions have come together for her role in the Heartland series.

Marshall earned most of her wealth from working as an actress. She is best known for her starring role as Amy Fleming on the TV series – ”Heartland.”

At the time of writing, Amber has appeared in 234 episodes in the series.

Amber’s earnings per episode were not revealed to the public, but, on average, an actor on a similar TV series receives around $50,000 per episode before taxes.

She also performed in Love in Harmony Valley, The Power Strikers, and more.

Amber has started her own line of jewelry (Amber Marshall Jewellery Collection) as well as her own magazine.

Therefore, Amber Marshall has an estimated net worth of $6 million.

READ THIS NEXT: Who is Eugenio Derbez?