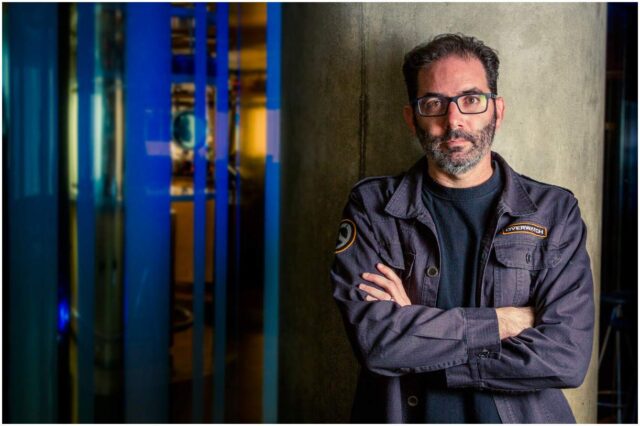 Jeff Kaplan is a video game designer who was vice president of Blizzard Entertainment.

He was born on  November 4, 1972, in New Jersey, USA. Jeff was raised in La Cañada Flintridge, California.

Jeff was an employee of his father’s recruiting business.

He also worked for Universal Pictures as a writing intern for a while; nevertheless, this job didn’t meet his expectations regarding how writing for the movies should be.

“I said f### it, I’m going to play EverQuest in my free time. At least I didn’t feel like a failure there. I had these big blocks of anti-social time,” he said.

His EverQuest guild was called Legacy of Steel. One of his guildmates was Rob Pardo, the lead designer of World of Warcraft.

In 2002, Kaplan began working on World of Warcraft. Blizzard hired him due to his rants on Sony Online’s handling of endgame content and his status as Tigole, guild leader of Legacy of Steel guild.

Kaplan announced that he was leaving World of Warcraft to work on Blizzard’s other unannounced MMO project (Titan) on February 12, 2009.

”I wanted to take a moment to let the community know that I have switched roles here at Blizzard to work on our upcoming, unannounced MMO,” Jeff said during an interview.

Jeff continued – ”WoW has been such a central part of my life these past six and a half years, and its success would not have been possible without the tremendous community around it, so I wanted to say thank you to all our players who have shared this amazing experience with us so far.”

In addition, on March 13, 2017, in an “Ask Me Anything”- style thread in the Overwatch subreddit, he revealed that he left World of Warcraft since he had been “feeling very fatigued after working on World of Warcraft,” while Project Titan presented a new challenge.

On Project Titan’s cancellation (the game was internally canceled by Blizzard in May 2013), Jeff then became the game director of Blizzard’s latest game, known as Overwatch.

Currently, Kaplan is the lead designer and game director of Overwatch.

“There are definitely some similarities between Titan and Overwatch,” Kaplan said. ”But Overwatch really is its own project built from the ground up.”

As of 2018, Overwatch has a few professional esports teams that will compete in the Overwatch League and over 40 million registered players worldwide.

In April 2021, Kaplan left Blizzard. It was truly the honor of a lifetime to have the opportunity to create worlds and heroes for such a passionate audience,” Jeff said in a statement.

As a player, his favorite game genres are MMO and FPS.

“Look, if you see that Kaplan kid, tell him to stop joyriding in my golf cart, ’cause I know it was him!” – said Hal-Fred Glitchbot (a famous omnic producer, film director, and screenwriter) about Kaplan.

He is said to be a peanut butter enthusiast.

Ben Brode is another game designer that worked for Blizzard.

Jeff Kaplan has a wife named Angela, whom he met playing EverQuest.

In an interview, he spoke with PCGamesN and said that insights from Angela over dinner were mostly responsible for the Winston changes, which were made in a patch.

In an interview, Jeff also said that Angela is the reason he shaved his beard.

“There’s not going to be a moment where we have a magic patch in Overwatch that makes bad behavior go away.”

“I think reaper is fine.”

”Statistically, the things that are most unbalanced aren’t what you think they are.”

”I believe the game is currently balanced.”

”In Overwatch, we need to walk a fine line with crowd control abilities.”

READ MORE: Who is John Romero?

His salary at Blizzard Entertainment was not disclosed to the public. But, a lead software engineer at Blizzard has an average salary of $160k per year. Also, the average Corporate Vice President’s salary is $175k per year.

Therefore, it is thought that Jeff Kaplan’s salary at Blizzard Entertainment is around $200,000 per year.

Kaplan earned most of his wealth from working as the vice president of Blizzard Entertainment.

READ THIS NEXT: Bello Nock Net Worth