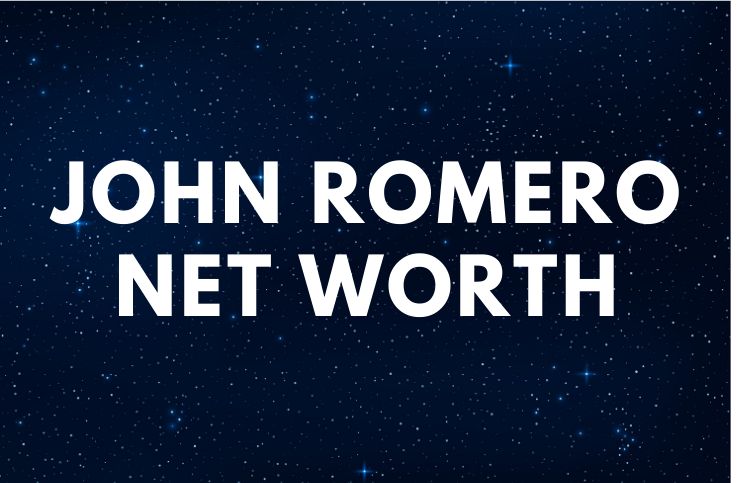 John started learning programming from students in a local college in the 1970s. He said in a 2018 interview: ”I started programming in BASIC, which was a wonderful language to begin with.”

Romero attended Sierra College for a while.

In March 1989, he moved to Shreveport and joined Softdisk as a programmer in its Special Projects division.

While working for id Software, John was involved in the creation of several games, including Quake, Doom, Doom II, Wolfenstein 3D, and Commander Keen.

John said for PCGamesN: ”We had the entire game in our heads.” John went on to say: ”We just needed to quantify what needed to be done and went about working on it until the game was finished.”

In 1996, he resigned from id Software due to “not working hard enough.”

After his resignation from id Software, Romero moved to Arlington. There, John and Tom Hall co-founded Ion Storm.

In 2000, a first-person shooter video game, Daikatana, was developed by Ion Storm for Nintendo 64 and Microsoft Windows. Daikatana was built using the original Quake game engine. It has been called one of the worst video games of all time.

One advert for Daikatana became notorious — it was a poster containing the phrase “John Romero’s About To Make You His Bitch.”

Romero said for Kotaku regarding the ad: ”You know, I never wanted to make you my bitch.” John later added: ”Not you, not them, not any of the other players and, most importantly, not any of my fans.”

In July 2001, Tom Hall and John founded Monkeystone Games. Some of the games developed by the company included Congo Cube and Hyperspace Delivery Boy!.

In October 2003, he joined Midway Games as project lead on the follow-up to Gauntlet Legends and Gauntlet Dark Legacy, Gauntlet: Seven Sorrows.

He announced a partnership with Adrian Carmack (one of four co-founders of id Software) to create Blackroom in April 2016. Currently, there have been no more updates about Blackroom’s development.

In 2017, Romero earned the Legend Award at Develop: Brighton as well as the Lifetime Achievement award at the Fun & Serious Games Festival in Bilbao.

In 1987, Romero married Kelly Mitchell. John first met Kelly while he worked at the register of a Burger King restaurant in Rocklin. They divorced in 1989.

On July 1st, 1993, John married Elizabeth Ann McCall. They met while Elizabeth worked at Softdisk in Shreveport. The two divorced in 1998.

Brenda was the lead designer for Playboy: The Mansion and Dungeons & Dragons: Heroes. The two worked together on Ghost Recon Commander, Cloudforest Expedition, and Ravenwood Fair. In November 2010, Brenda and John founded Loot Drop, a social game development company.

With his second wife, Romero has a daughter, named Lillia Antoinette Romero.

His current wife, Brenda, also has three children from a previous marriage.

Romero said that he plays games with his kids all the time: ”We played at the Doom 20th anniversary.” John continued: ”My kids come over and they play Doom and Quake, and deathmatch that.”

”Deus Ex was a very important game – it was expertly designed and led by Harvey Smith and Warren Spector.”

”I had been addicted to arcade games that ate all your quarters.”

”When Doom came out – the Network play – there weren’t many games like that.”

”I think communications are more important than anything.” (Habr)

”When Daikatana came out, the industry reviled the game and trashed it in all forms of media.”

Romero put his Ferrari up for auction on eBay in 2002.

The name “Romero” is written in blood on one of the walls in MAP19: Shipping/Respawning in Final Doom.

He has won more than 100 awards as a game designer.

His head can be found within the final boss of Doom II. The head has 250 hit points. It is located in a room that cannot be looked or reached into from the outside.

He is one of the earliest supporters of eSports.

Romero earned most of his wealth from being involved in the production of at least 100 games. He is best known for his work at id Software. Therefore, John Romero has an estimated net worth of $3.5 million.

READ THIS NEXT: Who is Martin Luther King III?